As India begins to relax lockdown rules, there is a growing demand for tests on a mass scale

With densely packed cities, widespread malnutrition and a rickety health infrastructure, India has little margin for error when it comes to handling the novel coronavirus disease (COVID-19) pandemic. Two things that helped the country were past experience and staying nimble, the Indian Council of Medical Research (ICMR) had said.

“We learned from the 2009 swine flu epidemic,” it said in its Intelligent Testing Strategy, released earlier this year.

Only two institutes — the National Institute of Virology and the National Centre for Disease Control — had the capacity to perform molecular tests essential for pathogen diagnosis. But now, there is a network of virus research and diagnostic laboratories (VRDL), 13 of which were roped in for testing in cities with international airports even before the country reported its first cases.

Imposing the nationwide lockdown, dubbed the biggest and stringent, is also part of this testing strategy, ICMR said. This provided time to create adequate facilities to trace, track, test, quarantine and treat before the disease spread uncontrollably.

As of May 28, 2020, at least 641 public and private laboratories and those in research and development institutions, universities and public and private medical colleges were roped in to ensure the load of testing did not overwhelm the system at any time.

At places where these could not be provided, a system to transport samples to the nearest testing facility were set up or automated machines like TrueNat were provided, the document said.

The government also revised its testing guidelines to iron out glitches as the pandemic spreads and throws new challenges. The government plans to ramp up the capacity to test to 0.2 million a day.

Using rapid test kits, on May 12, ICMR initiated a community-based serological survey to estimate the prevalence of COVID-19 in the population. It also carried out a hospital-based surveillance to monitor the trend of infection in all districts.

In the absence of treatment, these tests would not be of any help to patients. The data, however, helps understand the progress of the pandemic. For instance, the online database ourworldindata.org, that provides information on the number of tests a country conducts to find one COVID-19 case, said most countries see a fall in the ratio as their outbreaks grow.

Once the number-of-tests-to-positive-case ratio starts rising again, it suggests the country has controlled the pandemic. According to the database, as of March 13, India conducted 86.667 tests to find one case, meaning fewer people were infected.

This number has gradually been going down and on May 26, it was as low as 21.503, suggesting that India is heading towards the peak of the epidemic. 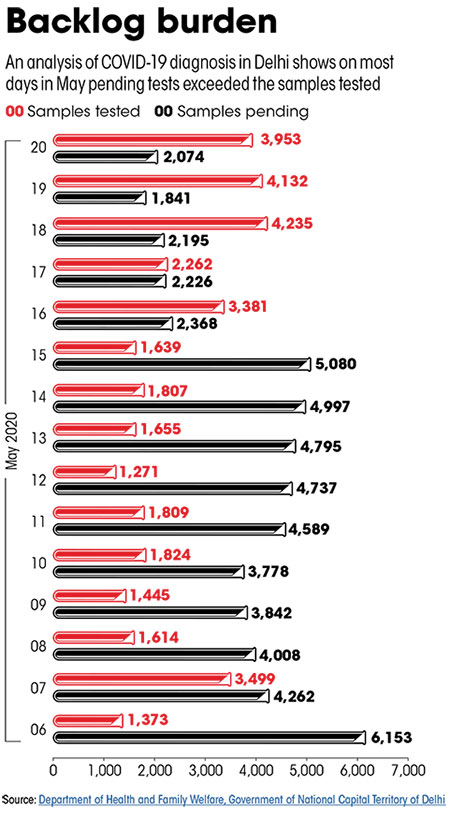 Public health experts, however, said widespread testing may not provide much insight into COVID-19 prevalence or help contain it.

Russia for instance, performed 11,603.5 tests to find one positive case on March 5 and then 12,841.5 tests for one on the very next day. This high level of testing, however, did not help the country, which is now the third worst-hit by the pandemic. On May 26, it reported one new case per every 25.919 tests performed.

KR Antony, Kochi-based public health consultant and former director of the State Health Resource Centre, Chhattisgarh, said, “In India, a seven-fold increase in testing after March 27 at the national level did not have a corresponding increase in positive cases. Of the total test samples, positive cases continued to hover around 3.9 per cent.”

This suggested the prevalence of cases did not increase with the increase in the number of tests, barring hot spots in cities and districts that report high infection,” Antony said.

The more the net of sample collection to the general population is widened, lower will be the positivity rate, he said.

This is particularly true for India, where almost half of the districts were not affected by the pandemic.

“Due to the complexity of the disease in terms of high proportion of asymptomatic cases and the uncertainty surrounding the testing and its validity, sole dependence on testing and seeing it as a magic bullet to the problem of COVID-19 is incorrect,” said Mathew George, professor at the Centre for Public Health, Tata Institute of Social Sciences, Mumbai.

The age of the patient, comorbidities, whether symptomatic or asymptomatic, occupation, staying single or with a family of elders — all these factors decide the course of action more than the test results, he added.

Gaps in the pandemic control system can also lead to spread of the disease. Consider the national capital Delhi, which has 32 labs — 15 are government- run and 17 privately owned.

Following a high court order on May 4, Delhi put all data related to daily tests, positive cases and pending cases in the public domain. A quick analysis of these data showed massive backlogs.

There are days when the backlogs match the number of tests done that day. Other than infrastructure, shortage of technicians is a reason for such backlogs.

“This is because no earlier planning was done for such a viral pandemic in India,” said AR Deshmukh and SN Bhattacharjee, of Delhi-based All India Medical Laboratory Technologist Association.

Besides, the cost of performing the test for a large majority of people who have not been exposed to the SARS-CoV-2 virus that causes COVID-19 could be prohibitive in a country whose per capita expenditure on public health in 2018 was Rs 1,657 — way less than RT-PCR tests that cost Rs 4,500.

Understandably, the government is trying to reduce the testing burden. On April 13, in areas with low prevalence of COVID-19, ICMR said pooled samples (genetic material from five patients) could be tested using RT-PCR. In this, all patients need to be tested only if the pooled sample tests positive.

India has been changing its testing guidelines as the pandemic spreads, throwing new challenges.