With a taste for metals

Made to order plants that eat pollutants 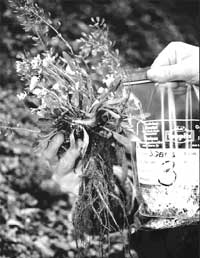 new crops that help constrain industrial contamination could be a part of the future ways of controlling pollution. The genes that allow plants to accumulate large amounts of metal in their tissues have been identified and cloned at Purdue University, usa . The finding is expected to lead to new crop varieties that can clean up industrial contamination.

David E Salt, associate professor of plant molecular physiology and principal investigator, says, "This is really one of the first tools that we've got to manipulate this process of metal hyperaccumulation," he says. "So what we're going to do now is to start expressing these genes in non-accumulating plants to see if we can turn them into metal-accumulating plants."

The genes were identified from the wild mustard Thlaspi goesingense, a plant that grows in the Austrian Alps, where it hyperaccumulates nickel. The plant is similar to the nonmetal-accumulating plant Arabidopsis thaliana , which is commonly used in scientific research. According to Salt more than 350 species of plants are known to accumulate metals, such as nickel, zinc, copper, cadmium, selenium or manganese in high levels.

"The plant species that we're interested in can accumulate one per cent of their dry biomass as nickel. In a normal plant you might expect to find 10 to 100 parts per million of nickel in their tissue, and these plants can accumulate 10,000 parts per million," he says. "They obviously have this extraordinary capacity to accumulate metals and they do this in the wild without any interference from human beings."

Hyperaccumulating plants store the metal in microscopic structures in their cells called vacuoles. The vacuoles are membrane-lined structures that protect the rest of the cell from the toxic effects of the metal. Interestingly, the protective membranes that surround the vacuoles closely resemble cell membranes in the human liver that serve a similar function. Scientists are not completely sure why some rare plants try to grab as much metal as they can, but studies indicate that they do this to stop insects and other creatures from eating them.

Just as people hate to bite down on a piece of aluminum foil, insects tend to avoid eating plants that taste like metal. "You can imagine if you're a bug and you bite down on a plant and it's got 10,000 parts per million of nickel in its leaf, it's not going to taste too good," jokes Salt. Scientists are interested in using metal hyperaccumulating plants as a means to clean up contaminated brownfield sites. Researchers believe that soil polluted with heavy metal or radioactive materials could be cleaned up using crop plants that absorb the material. This process is called bioremediation, or more specifically when using plants, phytoremediation. "Imagine if you have a site contaminated with cadmium. Right now your options are to put a fence around it and put a sign up telling people to stay out, build a parking lot over it, or dig up all of the soil and truck it to a landfill, which is very expensive." Salt says, "The idea would be that you could take plants that accumulate metal -- you could essentially farm the metal out of the ground. Over five or 10 years, by growing crop rotations there, you could remove the metal from the site. The nice thing is that it's cheap, and you're left with a soil at the end of it which could be used for other things." But the metal hyperaccumulating plants found in nature would not be used for phytoremediation because they are small and have lesser growth rates. Instead, scientists could move the identified genes into fast growing, large plants, such as grasses.