In the early 1990s, a London journalist began investigating the nuclear industry. Outrage over Iraqs nuclear weapons programme was at its optimum in the West and the nuclear industry was a favourite research topic for many. Stephanie Cookes advantage was she was an insider. She had worked in the industry for about three decades, had access to facilities, talked to main players and knew the intricacies.

In In Mortal Hands, A Cautionary History of the Nuclear Age she showed Iraq was never the most terrifying case of nuclear energy abuse. Beginning in the 1930s, Cooke explores how the development of atomic energy was a race to control the world. Of course, the expectation of electricity too cheap to meter brought hopes, in some quarters, to end world poverty.Yet nuclear power proved costly and far from risk-free. 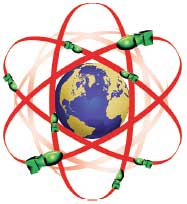 Some presumed by the turn of the 20th century there could be more than 500 fast-breeder reactors. By the millenniums end not a single fast-breeder was in operation. This, after all the money spent on weapons programmes since 1940 (US$5.5 trillion by the US alone) and all the talks of deterrenceit hasnt abolished war, either. But, as Cooke laments, we continue to pour money.

Cooke is worried about the build-up of fissile material in India and Pakistan. But she also turns our attention to things few people talk about publicly, like whether the threat of a nuclear North Korea will force Japan to use its plutonium stockpile to make weapons.

Shefali Kukreti is a civil servant. The views expressed in this piece are her own