A forester’s  perspective on green governance

Recently, on discovering that I work in the forest department, a lady co-passenger in a flight asked, “Are you people really doing anything for the forests?” The unconcealed taunt set me and my friends discussing with the sceptic the scenario of green governance in India. How are we managing our forests? Is it time to hand over the forest resources to panchayats with the hope that they can manage better? Is the forest department guilty of propagating a management model that excludes people? Should we continue with the Indian Forest Service at all?

The systematic management of Indian forests began in 1864 with the appointment of Dietrich Brandis, a German forester, as the Inspector General of Forests. The Imperial Forest Service was constituted in 1867. Interventions by colonial rulers in the forestry sector originated purely to meet the demand for ship building and later, to supply sleepers for the fast-expanding railway lines. Post 1857, the British Crown came up with several forest legislations aimed towards strengthening the colonial hold over the forest resources. But they also made allowances for local needs of fuel, fodder and non-timber forest produce. Applying the current yardsticks of conservation or pro-people sentiment to the British administration of the 19th century would be wrong. But even as early as in 1837, foresters like Alexander Gibson and Hugh Cleghorn warned about the ill effects of wanton destruction of forests and linked drought with deforestation.

After Independence, the forest policy gave impetus to industrial plantations. The focus shifted in the 1970s towards a people-centric management. The National Forest Policy of 1988 consolidated the participatory approach. The trend has strengthened over the years. The defining moments in conservation of wildlife and forests came through the Wildlife Protection Act of 1972 and the Forest Conservation Act (FCA) of 1980.

In India, management of forests cannot be without considering the livelihood of nearly 200 million people who live in and around forests. They depend on forests for fuel wood, fodder for their cattle, and small timber and non-timber forest produce as a source of additional income. It is in this sphere that the forest department receives maximum flak. But contrary to the accusations, many states allow harvest and sale of non-nationalised minor forest produce (MFP) without restrictions. In Chhattisgarh, the State MFP Federation gives back the entire profit generated in the beedi leaf trade as bonus to the collectors. The leaf pluckers have insurance covers and their children are provided scholarships. The “liberation” of bamboo from the clutches of the forest department in a small village in Maharashtra may have brought joy to the anti-department brigade but can this success be replicated in all panchayats of the country? Who is going to place checks and balances to prevent a few strongmen of the village from usurping all the benefits? Who will take responsibility if indiscriminate harvest of bamboos results in both economic and ecological calamity?

Canards have also been spread about the resistance or non-cooperation of foresters in the implementation of the Forest Rights Act (FRA) of 2005. The forest department personnel do not have the veto power to prevent a forestdweller from claiming his ownership on a piece of encroached forestland. But at the gram panchayat level, the village committee can overrule the objections raised by the forest guard. At the block and district levels, the objections of sub-divisional forest officer and the divisional forest officer can be rejected by the committee’s other two members. When nodal agency for the implementation of FRA is tribal welfare department and when there are no real powers for the forest officials to block even wrong claims, it is baffling to hear people criticise foresters for not doing enough in admitting more titles. 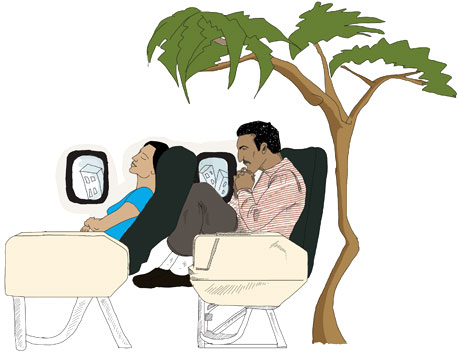 Continuation of the Indian Forest Act of 1927, which confers “draconian powers” to forest officers, is another grouse. The Act prohibits trespass into any reserve forest and makes encroachment, tree cutting and setting fire to forests illegal. Over the years, the forest department has only followed the rules. Instances of harassment of tribes and rural poor by the forest staff must be condemned. But in the present day such cases are exceptions rather than a trend. Had the foresters embraced romantic notions like “people always live in harmony with forests”, and allowed encroachment and tree felling against the provisions of the laws of the land, there would have been ecological disasters.

Since 1948, India has officially diverted nearly five million hectares of forestland for non-forests purposes. Even as the FCA played a stellar role in curbing the arbitrary diversion of forestland, the forest officers have come to be labelled as anti-development. People who criticise the Act fail to appreciate that the FCA is a regulatory Act and its provisions are not prohibitory. Environmentalists slam us for poor rejection rate of diversion proposals in forest areas. If we are being pilloried by both the sides, perhaps not all what we do can be wrong.

While blaming the forest department for the ills that plague our forests and wildlife, it is also equally desirable to look at its report card. A note on forestry in the first Five-Year Plan observed that in 1947-48, the tree cover of the country was about 20 per cent of the total geographical area. The population of our country according to the 1951 Census was 350 million. Almost 60 years later, the Forest Survey of India’s report pegs our current forest cover at about 21 per cent. This estimate includes private plantations and orchards just like the “tree cover” of 1951. But we have lost considerable amount of dense forests and the percentage of degraded forests has increased. With more than 40 per cent of the rural population relying on firewood and about 200 million bovines and over 50 million goats grazing in the forests we cannot expect to have Amazon-like thick jungles in our midst. But despite tremendous pressure on our natural resources, is it not a minor miracle that we still have about 20 per cent of the country under the green wash? Since 1947, India has not lost a single species of mammal or bird, except the Asiatic Cheetah which was already on its way out by the time we got Independence. In fact, we have rediscovered two species of birds which were long believed to be extinct. Do the naysayers believe this has happened in spite of any contribution by the forest department?

Sometimes critics also forget that the department is badly understaffed and the budgetary outlay is not substantial. Thousands of posts of forest guards and foresters are lying vacant across the country. The ageing subordinate staff is overworked with no special pay, provisions of ration or luxury of shift duty. They stay away from their families. Promotions are excruciatingly slow in the lower ranks. More often than not, a forest guard manages to get only one promotion, if at all, before he retires.

Soon the forest department would be completing 150 years of its existence. This is the apt time for introspection. I do not claim there are no ills plaguing the forest department. There are several grey areas where we must pull our acts together. Adoption of new technologies for better monitoring and regular specialised training for the staff should be the focus areas. The department’s contribution to forest research is at best pedestrian. We need to devise ways to improve the productivity. The second tiger crisis has once again focussed on our failure to effectively check poaching and prevent trade in wildlife. Forest bureaucracy needs to overcome the scourges of corruption and inefficiency to make the delivery mechanism more efficacious and accountable. The huge corpus of Compensatory Afforestation Fund Management and Planning Authority money provides a wonderful opportunity to do something meaningful.

More involvement of people in decision making at the ground level and more empathy towards tribals and other forestdwellers would yield better results in achieving our objectives. Perhaps it is in the fitness of things that as the administrative machineries become more decentralised, the reins of forest management may get passed on to people. But it would be unjust to hold up the forest department as the excuse for this paradigm shift.