Bihar man-eater shot: ‘We need to put down problem animals for wildlife conservation’

Shafath Ali Khan, who was engaged by the Maharashtra government in the operation to eliminate Avni in 2018, released a book this year to narrate his version of events 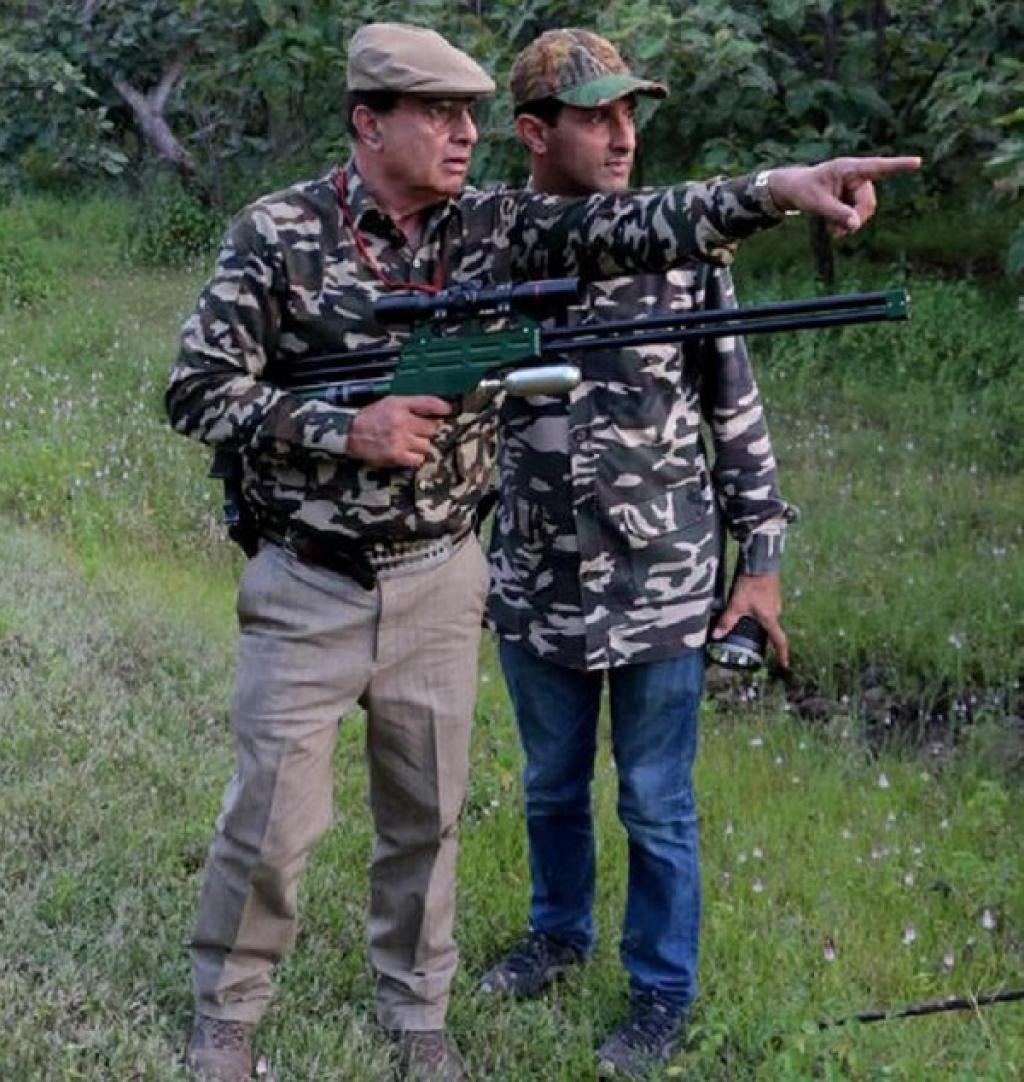 Shafath Ali Khan (left) with his son Asghar Ali Khan during a 2018 workshop at Pench Tiger Reserve, Maharashtra, to train forest department personnel on the use of tranquiliser guns. Asghar fired the shot that killed the tigress Avni in a human-dominated landscape some 50 kilometres from Tipeshwar wildlife sanctuary the same year

Shafath Ali Khan has been in the Valmiki Tiger Reserve of Bihar for the past few days. He was invited by the Bihar government to be part of an operation to “rescue”  a tiger that had terrorised villages near the Reserve and had killed nine people. On October 8, the tiger was shot dead in a sugarcane field.

Hunting tigers, leopards and elephants that have been declared to be man-eaters or rogues is not new for Khan, member of a noble family from Hyderabad. He was 19 years old when he first got an official assignment in 1976 to shoot a rogue elephant that had killed 12 people.

Since then, various governments have approached him to hunt problem animals — man-eating tigers, or wild boars that routinely damage crops.

Khan was in the spotlight in 2018 when Maharashtra assigned him the task of tracking tigress T1, or Avni, after she had killed 10 people (she eventually killed 13) in Yavatmal district. Khan’s team shot the animal dead on November 2, 2018, after pursuing it for over a month.

Avni received intense media scrutiny in India and abroad. Animal rights groups “engaged in slander”, says Khan, painting him a ruthless killer. This year, Khan released a book, Avni: Inside the Hunt for India’s Deadliest Man-eater, to narrate his version of events and to highlight the unprofessional way man-eaters are dealt with in India, he tells Down To Earth. Excerpts:

Rajat Ghai: Who decides if, or when,an animal is to be killed?

Shafath Ali Khan: Section 11 (1) (b) of the Wild Life (Protection) Act, 1972, says that if any animal is dangerous to human beings or to standing crops, the chief wildlife warden may, by order in writing, cause such animal to be hunted. This is the law of the land.

But the 2019 National Tiger Conservation Authority (NTCA) guidelines contradict it. They state that even if a tiger is a man-eater, outsiders should not be called.

Now, whom is the chief wildlife warden going to call? His staff cannot shoot a sparrow, forget a tiger. None of them have an appropriate weapon even as defined by NTCA. There is no medical college in the country which has a tranquilising gun.

A veterinarian who comes out from the college does not know how to shoot. How is he going to tranquilise a tiger? My non-profit, Wildlife Tranqui Force, has taught  doctors from Karnataka, Tamil Nadu, Madhya Pradesh and Maharashtra on this.

We have also conducted workshops in various other parts of the country teaching personnel how to handle a weapon, even how to walk in the forest. This is traditional knowledge and cannot be gleaned from the internet or from reading a book.

RG: How did you get involved in the operation to hunt Avni?

SAK: When all options are exhausted, the department invites us. When Avni could not be captured or tranquilised, it led to large-scale riots and burning of forest department vehicles. Several panchayats passed a resolution that the forest department was incompetent and their staff should not be allowed into their jurisdiction.

So, the police or the forest department could not enter the areas where Avni and her cubs were terrorising people.

This was the time the government wanted someone from outside who had the experience and the expertise to handle the situation. It was extremely tense for us since we had the national and international media, the confused forest department and no NTCA guidelines on a man-eating tigress with cubs.

The chief wildlife warden, AK Misra, wrote several letters to NTCA asking what was to be done. They said do what you feel is best. So, the administration had no option but to invite us. Those 45 days were especially tense for me and my team.

RG: Why do you call Avni India’s deadliest man-eater?

SAK: There are several reasons to that. One is that she was extremely elusive. There were 12 failed attempts to tranquilise her. Second, she continued to terrorise 26 villages spread over 150 sq km for two-and-a-half years. No other man-eater post Independence had done this.

Third, no operation had cost the exchequer as much as Operation T1 did — about Rs 10 crore, as per my estimate — because of its prolonged nature.

SAK: There are two ways of looking at it. One is a normal tiger or elephant, which we all love and want to exist. We work to protect them.

The other side of the picture is a man-eater tiger or a rogue elephant. A serial killer. What I am dealing with in the book is the second category. I have lived in tiny huts with those affected by such animals. I have felt the terror that they experience, witnessed 73 mutilated human bodies so far in my career.

I have collected limbs, heads, put them in gunny bags and brought them for post-mortem because the forest department could not go there. The locals were angry and the man-eater was still near where the body was lying.

In several instances, we did not have orders to shoot but to tranquilise. But I had to retrieve the body. I had carried my weapon. With all my experience, I would not go into a man-eater’s territory unless I have my heavy rifle with me because having seen those bodies and having seen a tiger kill can be very unnerving. So, these words are coming from me only as far as man-eaters are concerned.

If you ask me, “crafty” and “cunning” are very mild words; I would not hesitate to use the term “terrorist” for a serial killer like Avni, as she had terrorised an entire district.

The motive of my book is to save the tiger, not “a tiger”. It is such man-eater tigers and the gory bodies that they leave behind in the era of WhatsApp that make an entire area anti wildlife. This is against the spirit of conservation.

SAK: Yes. There is a desperate need to have professionals. In Africa, there are courses for professional hunters. They are taught how to track an animal, handle a heavy rifle and the psychology of a dangerous animal.

This is because a rescue operation can go either way. I have highlighted in my book as to how India’s veterinary doctors have become targets of misguided operations.

Ganesh Kumar, a member of the Indian Forest Service and a veterinarian, a rare combination, lost both his hands when a tiger chewed them in a rescue operation in 2011.

Prashanta Boro, a veterinarian at Gauhati Rescue Centre, was out rescuing a tiger with a police team in 2009. The tiger was in a bamboo grove feeding on a 19-year-old girl. As he fired the dart, the tiger roared and the police team behind Boro opened fire.

One bullet hit Boro in the chest and came out bruising him. The other hit him in the right arm, tearing his muscles. Eight-nine years later, Boro can hardly lift a cup of tea.

The police are not trained in this. The forest department is not trained to handle a stressed animal. Neither is the army. These are unprofessional ways of dealing with a man-eater.

The army, police and forest departments do not have a weapon suitable to kill a tiger. Weapons used by the army and police are designed for injuring a human being.

The bullets used by the forces are pointed and solid which are supposed to injure, so that on a war front, if one soldier is injured, there are four others to take him to hospital. Those rifles are not designed for killing.

A hunting rifle, on the other hand, fires a soft-nosed bullet which has got lead in front. It is a heavier and more powerful weapon. The bullet stops in the animal, creating a tremendous hydrostatic shock and instant death.

The hunting rifles that I use such as .458 Winchester Magnum or a .470 Nitro are not available with the forces. These are weapons my grandfather used. They are becoming extinct.

So, tomorrow if there is a man-eater, no one has the weapon, the expertise or traditional knowledge of tracking a tiger. An operation may go on for two years and cost the exchequer Rs 10 crore of taxpayers’ money.

RG: What is the future of human-wildlife conflict in India?

SAK: It is very alarming and dangerous because when a tiger or elephant is out of its protected area, it is face-to-face with angry and hungry people; hungry because the elephant has ruined their crops.

Take also the nilgai and wild boar menace in India. Today, wild boar are ruining crops outside forests in Gujarat, Rajasthan, Madhya Pradesh, Maharashtra, Telangana, Tamil Nadu and Kerala. We all like wildlife and want it to flourish but not at the cost of the blood, toil, tears and sweat of a farmer.

I would estimate that there are about 10 lakh nilgai outside Protected Areas in the plains of north India. There is no estimate of wild boar ravaging fields across India. What are we going to do with them? How many animals can we shoot to cull? This problem should have been addressed 30 years ago.

What is the environment ministry doing? Veterinary teams from Bihar have not been able to take out a 100 nilgai and wild boar that are within the walls of the Darbhanga airport. What are you going to do with free-ranging animals? I do not have an answer what is going to happen five years from now.