In Asia, India too was declared polio-free in 2014, but cVDPV was reported 50 times in the country in the past six years

The polio virus, that once paralysed nearly 75,000 children every year in Africa, according to the Global Polio Eradication Initiative (GPEI) — a public-private partnership to tackle polio — was eradicated August 25, 2020. Increasing outbreaks of circulating vaccine-derived poliovirus (cVDPV) — a rare form of the virus that mutates from the oral polio vaccine and can then spread to under-immunised communities — in the continent, however, was a worrying trend.

The continent may celebrate the eradication of the wild poliovirus, which spreads from person-to-person — usually through contaminated water — usually leading to paralysis by attacking the nervous system.

Increasing cVDPV outbreaks, however, remained a challenge in 16 countries or at least 30 per cent of the African countries, according to the World Health Organization (WHO) emergency committee on polio.

The countries affected by the cVDPV outbreaks are:

Most of the outbreaks occurred in central and western Africa between January 2018 and June 2019, according to a report by the US Centers for Disease Control and Prevention (US CDC).

The eradication of the wild poliovirus was undoubtedly the most commendable milestone in public health for Africa, said the Africa Regional Certification Commission (ARCC), an independent body set up in 1998 by the WHO and tasked with polio eradication from the continent. 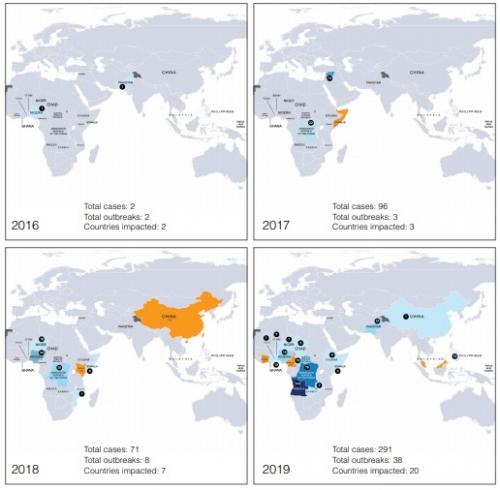 The risk of increasing outbreaks of cVDPV in the continent, however, was still a cause for concern, the ARCC — that oversaw the certification process and acted as the only agency to certify the African region to have eradicated the wild poliovirus — warned.

In Asia, India too was declared polio-free in 2014, but cVDPV was reported 50 times in the country in the past six years.

Afghanistan and Pakistan have yet to eradicate the wild poliovirus and pose a great risk to other parts of the world, including Africa.

Polio can be reintroduced to countries even after they are declared free of them, David Heymann, professor of Infectious Disease Epidemiology at the London School of Hygiene and Tropical Medicine, was quoted as saying by a news report.

African countries must strengthen their efforts to ensure vaccination of all children and protect them from cVDPV, said Helen Rees, Chair of the WHO’s International Health Regulations Emergency Committee.

The problem was not the vaccine itself, but low vaccination coverage, according to Jaume Jorba, associated with the US CDC’s report on cVDPV. “If a population was fully immunised, they would be protected against both vaccine-derived and wild polioviruses,” Jorba said.

Matshidiso Moeti, WHO’s director for Africa, in a statement, advised countries to stay vigilant and keep up vaccination rates to avert a resurgence of the wild poliovirus and address the continued threat of the vaccine-derived polio.

A novel oral polio vaccine type 2 (nOPV2 vaccine) for cVDPV was undergoing clinical trials since 2017. It was supposed to be introduced as early as mid-2020, but further trials were needed, said the GPEI in May 2020.

The trial of nOPV2 vaccine is part of the GPEI’s new ‘Strategy for the Response to Type 2 Circulating Vaccine-Derived Poliovirus 2020-2021’. The GPEI launched this strategy to address the growing challenge of cVDPV. Affected countries and the ones that are at risk across the African Region are the focus of this strategy.

The novel coronavirus disease (COVID-19) pandemic was disruptive for polio vaccination programmes in African countries, the GPEI said in May. It urged the countries to continue with their programmes to prevent any imports of the disease.

There were high levels of cVDPV transmission in western Africa and Ethiopia in 2020. The outbreak response, however, was significantly hampered, with many areas that reported cases not getting immunisation responses, the WHO said in June.

The pandemic significantly affected poliovirus eradication activities, particularly the implementation of the outbreak response, with preventative supplementary immunisation activities suspended in a majority of the GPEI target countries.

After a pause on polio campaigns globally, however, the GPEI’s Polio Oversight Board recommended the earliest possible resumption of safe delivery of vaccination campaigns.

Decades of planning and commitment

The WHO African region was certified ‘wild polio virus free’ by the ARCC as there were no recorded cases since 2016. The last case of the wild poliovirus in the region was detected in 2016 in Nigeria. Professor Oyewale Tomori led Nigeria’s efforts to eradicate polio from the country.

With this, five of the six WHO regions representing over 90 per cent of the world’s population were now free from the wild poliovirus. The achievement came through after strategic planning and a campaign that lasted over two-and-a-half decades. With this, the continent eradicated the second virus from the continent after smallpox four decades ago, the ARCC said.

Moeti appreciated the efforts of health workers in ensuring reach of the vaccination to eradicate the virus. “Africa’s commitment to eradicate polio took off in 1996 when African heads of state committed to eradicate polio during the 30 second ordinary session of the Organization of African Unity in Yaoundé, Cameroon,” she said.

The ‘Kick Polio Out of Africa’ campaign initiated in 1996 by former South African president Nelson Mandela along with Rotary International, focused on vaccinating every child with the polio vaccine, according to her.

As a result, 1.8 million cases of polio-related paralysis were prevented over the past 24 years. “Future generations of African children can live free of wild poliovirus,” she added.