Excess rainfall in central India is the new normal as India grows warmer. This can also make locust attacks a perennial problem

The southwest monsoon has been on schedule in 2020; rainfall was relatively low in south India but more in central states. Photo: Vikas Choudhary / CSE

The southwest monsoon season appears to be progressing according to schedule after its onset over Kerala on June 1, 2020. There have been, however, considerable variations in rainfall over what regions normally receive.

Madhya Pradesh has received the maximum — 114 per cent — excess rainfall, Chattisgarh a close second at 104 per cent. Gujarat, Goa and Maharashtra too have received 67 per cent, 51 per cent and 49 per cent more rainfall than what they receive during the period.

One reason for the difference could be Cyclone Nisarga, which formed in the Arabian Sea right around the time of the monsoon onset and pulled the monsoon moisture further inland into central India.

According to the first climate change assessment report for India published by the Union Ministry of Earth Sciences on June 17, this is a sign of a warming world.

The report, Assessment of Climate Change over the Indian Region, says the country’s average temperature has risen by 0.7 degrees Celsius (°C) since 1901. It will increase to 4.4°C by end of the 21st century, relative to the recent past (1976-2005 average). Even the summer monsoon rainfall has decreased over the country since 1950, particularly over the Indo-Gangetic plains and the Western Ghats. 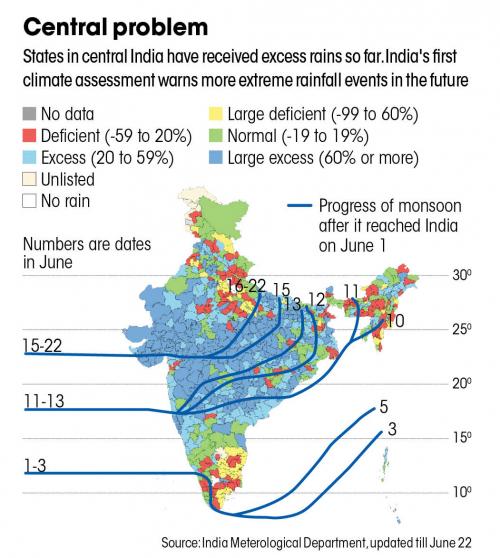 However, the frequency of localised heavy rainfall has significantly increased over central India, says the report, adding that extreme rains are concentrated around urban India. Climate models suggest that the monsoon circulation will weaken in future, which will be compensated by increased moisture content in the atmosphere.

While such a monsoon pattern can throw agricultural activities into a disarray, it can also make locust attacks a perennial problem for the country.

Locusts usually arrive at the scheduled desert area of the country for breeding during the summer monsoon season and leave around October-November. But this year, they arrived way ahead of the season and have since spread north and westwards in areas that had received ample unseasonal rainfall between March and May, due to western disturbances.

Till June 19, officers with the Locust Warning Organization (LWO) said, swarms had invaded some 60 districts in seven states. The Food and Agriculture Organization (FAO) said the swarms would oscillate east and westwards before returning to lay eggs with the onset of the monsoon in Rajasthan. LWO officials, however, said breeding was underway in Bikaner, Nagaur, Barmer and Jodhpur districts of Rajasthan.

With monsoon rains already sweeping across the newly invaded states, entomologists fear that some swarms might not go to Rajasthan for breeding and instead rapidly mature and lay eggs at places wherever they find sandy or loam soil, resulting in localised outbreaks.

What’s worse, in its June 20 forecast, FAO says that around 22 more swarms from Iran and southwest Pakistan will start moving towards the summer breeding areas along the Indo-Pakistan border. By early July, huge swarms developing in the Horn of Africa are likely to migrate across the Arabian Sea and arrive at Gujarat and Rajasthan. 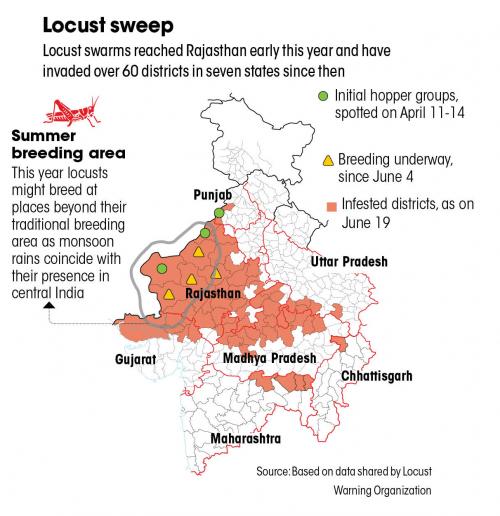 If the monsoon’s retreat gets delayed, they will extend their stay — like last year — resulting in a prolonged and most severe locust invasion in decades. By the end of the year it might result in a locust plague.