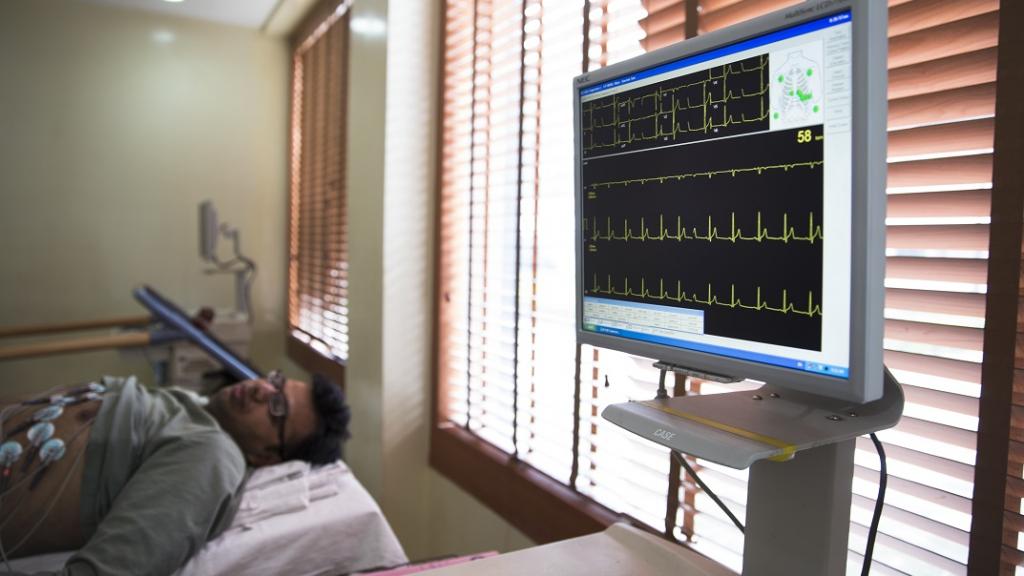 A man undergoing a heart checkup at the Moolchand Hospital in Delhi. The findings of The Lancet's new report emphasise the fast emergence of non-communicable diseases as a global health challenge. Photo: Chinky Shukla / CSE

Disability caused by non-communicable diseases (NCD) and injuries have emerged as the largest contributor to the global disease burden, according to a new report by The Lancet released October 16, 2020.

The findings of The Global Burden of Diseases, Injuries, and Risk Factors Study (GBD) 2019 again emphasises the fast emergence of NCDs as a global health challenge. This, even as countries seem to be performing well in controlling communicable diseases.

“Disability, rather than early death, now has an increasingly large share of the global disease burden,” the report said. The category of ‘disability’ includes conditions caused by NCDs and injuries.

Health loss is measured by disability-adjusted life-years (DALYs). It is a measure of overall disease burden developed in the 1990s and is defined as “the number of years lost due to ill-health, disability or early death”.

Disability caused by NCDs and injuries account for over 50 per cent of all health losses measured in DALYs terms in 11 countries — including Singapore, Iceland, Norway, Ireland, Australia, New Zealand and Qatar.

The latest GBD report covered 204 countries / territories for this annual exercise which has emerged as the most definitive statement on global health conditions.

NCDs are turning out to be the biggest concern for health in the world. Their emergence as a major health issue in low and middle income countries (LMICs) like India are a concern, given the lack of adequate health infrastructure and also policy focus on them.

The GBD report warned: “LMICs’ health systems are not well equipped to address the growing disease burden caused by NCDs.” The warning comes from the fast increasing health burden from NCDs in these countries.

“While deaths due to infectious diseases have fallen substantially across LMICs, NCD deaths are on the rise,” the GBD report said. For instance, the report cited that the number of deaths due to diabetes in Uzbekistan had risen by 600 per cent.