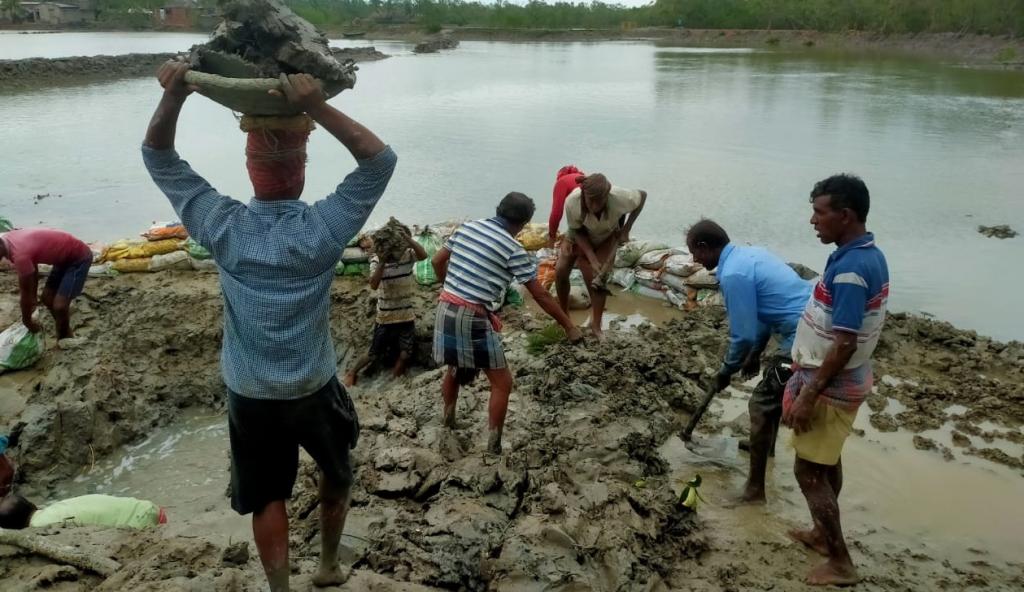 The Sundarbans have remained incommunicado even 24 hours after Amphan devastated the Unesco World Heritage Site between 2.30 and 6.30 on May 20, 2020, with wind speeds rising up to 185 kilometres per hour.

The cyclone, after making landfall close to Sagar island, moved in a north-easterly direction, close to densely-populated areas like Canning, Baruipur, Bhangar, Kolkata, New Town, Basirhat and others, before entering Bangladesh.

Amphan has turned into a deep depression over Bangladesh about 300 kilometres east–north east of Kolkata, according to the latest and last IMD bulletin at about 3.30 pm on May 21.

Seven districts in West Bengal have been hit hard by Cyclone Amphan, according to the India Meteorological Department (IMD).

Besides these, Purbo Medinipur, as well as the four adjoining districts of Howrah, Hooghly, Paschim Medinipur and Kolkata have been severely affected due to the cyclone.

Nadia district, north of North 24 Parganas, has also been bombarded by the cyclone.

Chief Minister Mamata Banerjee, who was in Nabanna (the state headquarters) control room till May 20 night, said on May 21 that 72 people had died due to the disaster in West Bengal and unprecedented damage had taken place in the Sundarbans and adjoining areas.

Forty-five people had died in West Bengal during the last powerful storm to hit the state, Cyclone Aila in 2009. Most deaths were in Darjeeling, in the northern part of the state.

She had earlier requested the Centre for financial help to support the millions affected, as well as for the area’s reconstruction.

This reporter could contact and talk to a few residents on the evening of May 21, in between intermittent disconnections.

He found that four western Sundarbans blocks around the landfall site — Sagar, Patharpratima, Namkhana and Kakdwip — have been most severely damaged by the cyclone.

Incidentally, almost the same area was majorly affected during Cyclone Bulbul in November 2019, that had far less wind speed compared to Amphan.

“The area has been mauled by the cyclone, that has been the fiercest in known memory. Thousands of mud houses have been fully or partially damaged,” Subhas Acharya, a retired official of the Sundarbans Affairs department in the state government and a local resident of the area, said.

“Innumerable trees, including extremely old trees, have been uprooted. Almost all lamp posts and telephone towers have been grounded. The devastation seems to be much more than any earlier disaster in my memory,” he said.

“It’s like killing a dead person. We have been knocked down by Amphan before even trying to recover from Bulbul. We have nothing left to stand on,” a resident of Mousuni island, which lies close to Sagar island, said.

A few embankments have reportedly been breached and saline water has surged inland.

However, a large part of the 3,500 km-long embankment network remained unaffected as a major part of the storm passed before the peak of the high tide came into rivers.

Experts feel a simultaneous occurrence could have brought much greater disaster.

“As I understand, the end part of the cyclone might have coincided with the reasonable level of high tide in the Sundarbans,” Sugata Hazra, a professor of oceanographic studies in Kolkata’s Jadavpur University, said.

“If such a situation had arisen, would have had the potential to damage embankments and saline water would have surged much farther inland, affecting the livelihoods of people,” he added.

“In Chotomollakhali, the embankment was breached at three points. Locals have already repaired two while the panchayat is trying to repair the other one soon,” Gopal Mondal, a local resident and school teacher, said.

“The embankment has been breached and there has been lot of inundation,” a resident of Minakhan, said.

The ingress of saline water even 20 km inland, as a result of embankment breaching, can render agricultural fields unproductive for a long duration.

The state agriculture department, however, claimed that most of the Boro paddy cultivation in the area has already been harvested.

However, Mondal pointed out that the impact of the cyclone, and also the damages, in Chotmollakhali — which falls within the eastern Sundarbans and Gosaba block — had been less in the zone.

Incidentally, the area was most affected during Cyclone Aila. “The water level in the river was quite less when the storm peaked and major rainfall happened, which saved us,” Mondal said.

Sanjib Banerjee, head of IMD Kolkata, said that though the very high wind speed and the cyclone’s passage through populated areas triggered widespread damage, it could have been more had the cyclone hit in the dead of the night instead of its afternoon to evening landfall.

Levels of rivers in the Sundarbans rose by 5-7.5 metres during the storm, according to sources.