Most units in the state do not comply with existing guidelines, CSE report finds 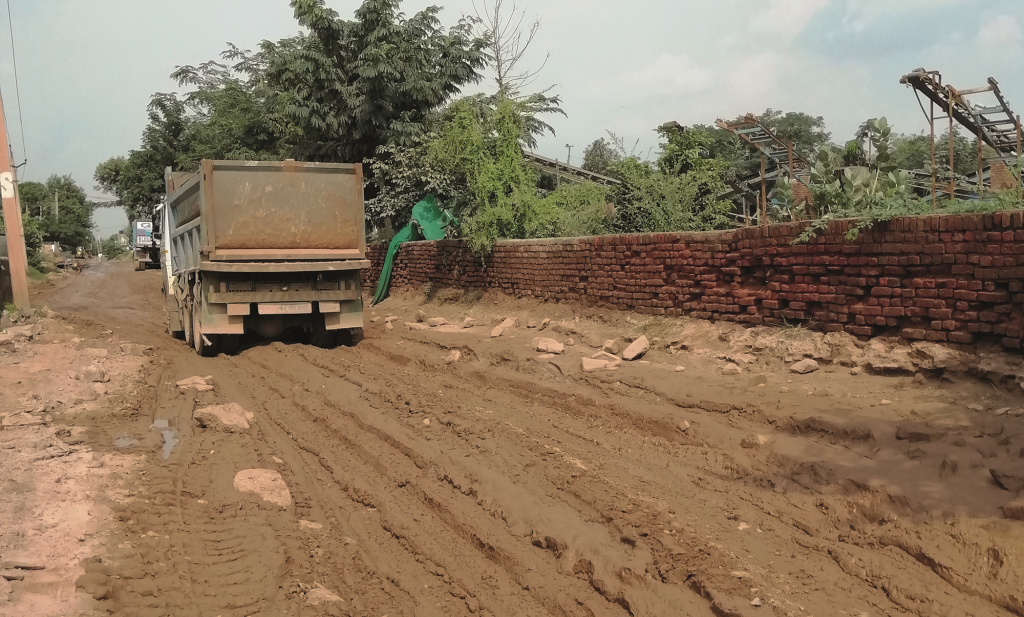 CSE found that crusher zones in Indri Rewasan (Nuh) and Raisina (Gurugram) do not have metalled roads and are dusty during vehicular movement. Photo: Divyansh Upadhyay

Haryana Pollution Control Board (HSPCB) has come up with a draft notification elaborating siting criteria and pollution control measures to be adopted by stone crusher units. But the new draft makes no effort to correct the anomalies of the older guidelines and adds a few of its own.

Crushers are a significant source of fugitive emissions. The main culprit is the poor infrastructure in the facilities used for crushing stones into smaller sizes or powder. The slightest wind or movement of vehicles in the plant or on the approach road fills nearby areas with dust.

Haryana already has notified guidelines for this sector and the draft notification issued in November will supersede the existing one.

Read more: This Pune stone-crusher unit shows how to do it properly

Delhi-based non-profit the Centre for Science and Environment, in its report Implementation Challenges of the Environmental Guidelines in the Stone crusher Industry, found that most units in Haryana do not comply with the existing state guidelines.

Except for two, all units surveyed performed poorly on parameters to check the implementation of state guidelines and infrastructure for pollution control. Half of the 12 units could not score any mark in the environmental performance rating.

However, there is no effort to improve the environmental performance of the stone crushers in the state in the draft notification.

For the Municipal Corporation, the distance has been reduced to two km from three km. This implies that the state government has not considered the environmental menace created by the stone crushers.

Stone crusher zones are established in Haryana after considering the availability of raw materials and checking illegal mining. However, the siting criteria allows stone crushers to be located outside existing or approved crusher zones, except in the case of Faridabad, Palwal and Gurugram.

It’s difficult to understand the rationale behind the same. Logically, inspecting the units inside a crusher zone is more feasible rather than individual units. It will also reduce the time required by already overloaded HSPCB officials.

Scattered units will make inspection and checking for compliance a cumbersome job for them. Moreover, past evidence shows that illegal sourcing of raw materials is more prominent in areas where crushers are located outside crusher zones.

Furthermore, most stone crushers are ill-equipped to control fugitive dust emissions. Such standalone units only become a bone of contention in the future. Therefore, it is pertinent for the Haryana government to revisit the siting criteria in the draft notification and prohibit stone crushers outside crusher zones.

Concentration of suspended particulate matter (SPM) within 3-10 metres of any process equipment of a stone crushing unit should not exceed 600 microgrammes per cubic metre, the draft stated.

Units mostly meet this criterion during the regulatory monitoring by purposely reducing the plant’s operational capacity during the monitoring period. On the contrary, the plants are full of dust when operating at full capacity on other days.

Both the old and the new draft notification have mandated stone crushers to have a dust containment-cum-suppressing system for the equipment in the form of covered sheds and sprinklers. But the statement is vague and open-ended, as it does not provide any specifications for this provision.

The guidelines should specifically mention that the sheds should be provided on all sides and top, including the height of the shed, which should be from the top of the equipment to the ground.

Similarly, the draft notification also requires the provision of 50 sprinklers as the old one. However, the number of sprinklers will only serve the purpose if installed at appropriate locations. Thus, the notification should specify the location of the sprinklers to get the desired results.

Crusher operators often hesitate to use water sprinklers as it increases the machine’s maintenance cost and deteriorates the product quality. Thus, an alternative to this can be the use of a dry extraction system, which will include hooding and bag filters for the extraction and collection of dust.

However, CSE’s report found that except for the Mohabtabad crusher zone in Pali, other crusher zones in Indri Rewasan (Nuh) and Raisina (Gurugram) do not have metalled roads and were dusty during vehicular movement. Just one unit has provision for metalled roads within the plant.

It is appreciable that the Haryana government, in its draft notification, now has pushed for the laying of tiles in the entire area of the unit. This will not only help improve dust collection from areas but also significantly reduce dust arising because of vehicular movement.

The government must first understand why the existing notification failed to achieve the desired result. This can be done by auditing the old notification and identifying the implementable measures.

Simply coming out with a new draft notification without due diligence of failure of older notification will not help either the regulators or the stone crushers.