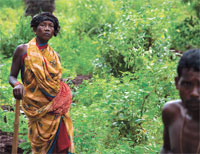 The more the forest regime in India changes, the more it remains the same. The Indian Forest Act, 1927, gives the forest bureaucracy unprecedented powers. In the past 85 years, the Act has undergone several amendments, both at the Central and state levels, to swing the power in favour of the forester. In the last week of March, the Cabinet approved another set of amendments to the Act. The stated aim of the Indian Forest (Amendments) Bill, 2012, already introduced in the Rajya Sabha and currently with a parliamentary committee, is to stop unnecessary harassment of forest dwellers. This evokes hope as well as calls for scrutiny.

At present, nearly a million cases are pending against forest dwellers, mostly tribals, under this Act. Most of the cases involve straying into forest or picking up dry twigs for fuelwood. Both the violations can be termed “forest encroachment” in clinical interpretation of the Act. In the areas affected by Maoist insurgency these cases are believed to be a major reason for the rapid spread of the red brigade. The enactment of the Forest Rights Act (FRA) has further fuelled the debate over the 1927 Act because it contradicts the latter’s key provisions such as control over and access to forest produce like bamboo.

The Bill proposes two amendments. One will raise the penalty for compounding minor offences (paying money for dropping charges) from Rs 50 (set in 1927) to Rs 10,000. Under the second amendment, forest officials will have to consult the gram sabha (village council) while compounding a case; this provision is applicable only to scheduled areas. What do these amendments mean? Both contextual and clinical interpretations yield little for celebrate.

The amendments have been proposed at a time when the Prime Minister’s Office and the Planning Commission are discussing ways to make forest dwellers’ access to minor forest produce (MFP) easier and lucrative. One proposal is to declare minimum support price for MFP. But contradictions between FRA and the 1927 IFA over the definition of MFP are proving to be stumbling blocks, as meetings that include representatives from the environment and forests ministry point out. For the first time FRA has categorised bamboo and tendu leaves as MFP. But forest departments do not accept this despite a circular sent to states by Jairam Ramesh, the former environment minister. On March 16, the environment secretary had a meeting with principal chief conservators of forests from states. They debated potential amendments to IFA 1927 to factor in the FRA definition of MFP and provisions of community rights over MFP where community forest rights have been granted. The meeting also discussed a clear division of work between the environment ministry and the tribal ministry, which is the nodal ministry for implementation of FRA. On March 26, the Bill was introduced in the Rajya Sabha but it did not have any of these amendments. That is the contextual disappointment. The more the confusion over FRA provisions remains, the longer the “historical injustice” continues.

Let’s now gauge the two amendments against their stated objectives. In more than one way, the amendments will not bring down foresters’ harassment of forest dwellers. The first amendment will not only make forest laws stringent but also breed corruption, benefiting the forest official. A large number of cases against forest dwellers are pending for the simple reason that they could not afford the Rs 50 penalty for compounding. The average expenditure of a forest dweller is Rs 8 per day. And more than half of this comes from forest produce in tribal areas. People will not stop accessing forests that most of the time attracts the provisions of IFA 1927. They will have to spend more on bribe. Junior forest officials will have the sword of Rs 10,000 penalty to hold over people’s necks to make them comply. In the end, a forest dweller will be poorer than before.

The second amendment will make “consultation” with the village council mandatory before compounding a case in scheduled areas. This amendment is rather irrational, in addition to being harmful by making the process of compounding even more cumbersome. On the other hand, under FRA, not only consultation but the main decision has to be that of the village council in all areas where the Act is applicable, and not just in scheduled areas. This amendment, thus, ignores what FRA provides. What's more, the process of consultation is likely to remain just that and the village council decision will not be binding. In tribal areas, the village council has constitutional rights over forest management and local resources that include minor forest produce. But states are yet to issue guidelines on this, thus, rendering them dysfunctional. The amendment will only water down these provisions.