Farakka construction has caused siltation in Bihar and eastern UP, leading to a rise in the Ganga riverbed’s height, which caused floods in August, say experts 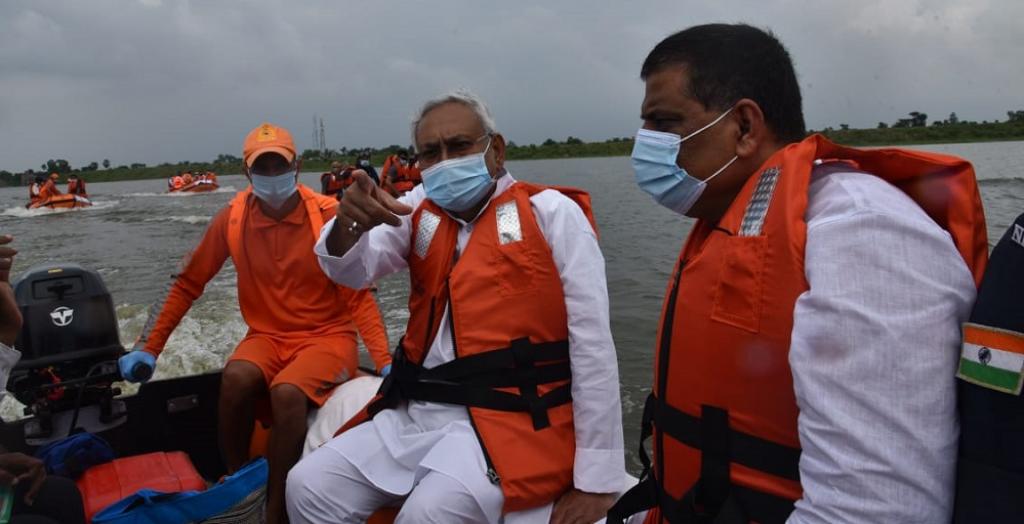 Floods in Bihar this year have not one, but two anthropogenic causes. The state saw early floods in June, which have been attributed to climate change. It then saw floods in August,  which are being ascribed to the Farakka Barrage on the Ganga in West Bengal, Bihar’s eastern neighbour.

Floods in Bihar are an annual phenomenon. But what makes the 2021 floods unprecedented in nature are their scale and longevity. This year, the deluge started way early, in June.

Normally, floods in the state occur in July, at the height of the southwest monsoon. But this time, Bihar, along with a few other states along the Gangetic-Brahmaputra basin, started reporting floods as early as June.

The state reported unusually high rainfall that month — an excess of 111 per cent — resulting in seven districts declaring a flood-like situation.

Bihar saw a second round of floods in August. On August 17, dozens of villages near Naugachia, a small town in Bhagalpur district, got completely submerged when the Ganga burst its banks.

Further upstream along the Ganga, Hathida in Patna district recorded its HFL, 43.33 metres on August 13. In Patna, the Ganga was reported to be flowing at 50.38 metres at Gandhighat, just 14 centimetres shy of the highest flood level ever recorded in that spot — 50.52 set in 2016.

The early floods in June can be attributed to the unprecedented level of rain the state received. However, in July and August, rainfall in Bihar was normal.

So why did the state report floods through July and August? Nilanjan Ghosh, director of the Observer Research Foundation’s Kolkata centre said the cause lay further east of Bihar.

The Farakka barrage in West Bengal regulates the flow of the Ganga. This has led to sediment deposition upstream of Farakka, from Ballia in Uttar Pradesh to Bhagalpur in Bihar. This, in turn, has led to a rise in the height of the river bed. Hence, the record flood levels the state is witnessing.

Down To Earth used data from the European satellite system Copernicus to map the unprecedented scale of the August floods along the banks of various rivers in north Bihar.

The first point plotted on the map is Dariapur, the largest rural block of Saran district. The August 23 imagery, when compared to August 2, shows a substantial increase in flooding.

Dariapur, like other places in Saran district, is a low-lying region. Hence, it was also one of the many places that reported floods in June. The August 23 situation can be attributed to the Gandak river inundating farmlands in the block.

Raghopur island is part of the Vaishali district. It has 53 villages, many of which were washed away as is shown by point three.

The fourth point shows Morwa and Sarairanjan, two regions in Samastipur district. Morwa is an urban block of 0.18 million people while Sarairanjan comprises 58 villages, with an area of 172 kilometres. The August 23 image shows an increase in flooding in the region due to a rise in water levels of the Balan river.

On its east is the agricultural piece of land stretching into four districts — Patna, Nalanda, Sheikhpura and Lakhisarai. Flooding in July led to the accumulation of water in the wetland as well the farmlands.

The riverine island shown by point six lies roughly 90 kilometres south of Patna. It is dotted with roughly 10 villages that are dependent on agriculture as their source of income.

The image of August 23 shows the extent of flooding on this riverine island. The residents lost their croplands, their source of income to the flooding.

The circle around point seven shows the extent of flooding that has happened in 21 days across both the banks. According to the August 23 image, Matihani, a major town in the Begusarai area, has been completely flooded. On the other bank, Mankatha, Bhanur, Barhiya, Pipariya and Surajgarha have all reported flooding.

Point eight shows floodplains that help in limiting damage caused by floods by slowing down flood water along the banks.

The white spots indicate human settlement. Due to the vanishing floodplains around Munger, towns like Barlapur in Munger district and Maheshkhunt and Gogri in Khagaria district, had to be abandone due to flooding.

Naugachia and Bihpur lie on the other side of Bhagalpur as shown by the last point. Satellite images of August 23 show how the residents of Bihpur and Naugachia were reeling off from the double whammy of flooding brought by the Ganga and Koshi.

Some 2,103 villages in 15 districts and three million people remained affected as of August 26, according to Bihar’s disaster management division,