Part I: A ground report from Indore to understand roadblocks in way of bio-CNG 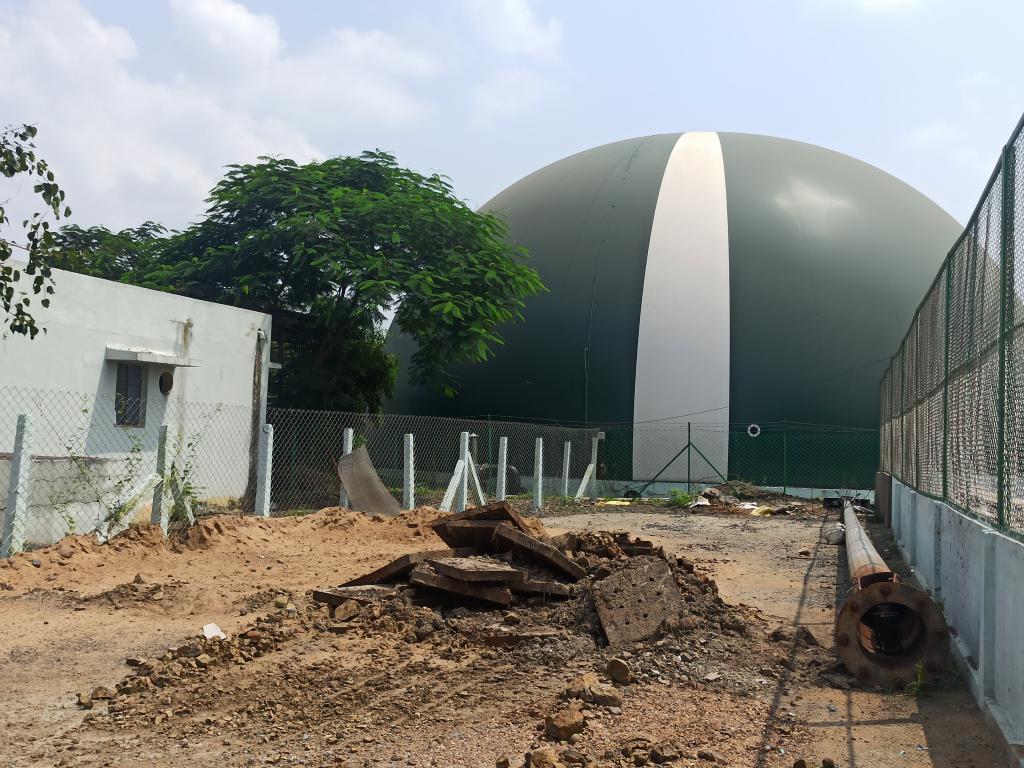 Bio-compressed natural gas is a coming-of-age technology that can deal with air pollution at various levels. However, the industry has not picked it up despite economic and environmental promises.

Indore has Asia’s largest bio-CNG plant from city waste. The plant is located in Devguradiya village on the outskirts of the city.

Read more: Time to address Delhi’s rising challenge of legacy waste: If not now, when?

Besides its famous Devi Ahilya temple, Devguradiya was notorious for being the dumping ground of Indore’s garbage for 70 years.

“Either smoke or rotting smell enveloped this region at all times of the day,” said Snehlata Thakur, a teacher at the Government Middle School in Devguradiya. “We kept the windows bolted to be able to teach. Many a time, children would not even come to school.”

Thakur has been working in this school for six years. “The smell is still there but is not as bad. The attendance has also gone up,” she said happily.

Though the ‘trenching ground’ in Devguradia has been replaced by a city forest and the bio-CNG plant, the putrefying odour of garbage still marks the area.

“I burnt 200 packets of incense this summer to mask the smell from the plant. At night, it becomes unbearable,” said Shivalya Chaurasia, owner of the Chaurasia Paan Bhandar, one of the 24x7 shops across the road from the bio-CNG plant.

This reporter spent time near Devguradiya in the summer as well as during monsoon. The odour was persistent in both seasons but especially terrible in the monsoon — extending to areas up to five kilometres away, depending on wind direction.

The bad odour in garbage is due to hydrogen sulphide (H2S) and ammonia which is released when garbage decomposes aerobically, said an SWM expert at the Centre for Science and Environment, New Delhi.

Also, problems can aggravate already sick people, like those with cardiac issues, organ transplants and malnourished or anaemic children. Even if they are not aware or used to it, they are inhaling noxious gases all the time, Bhargava further said.

The particulate matter pollution was visibly high in the area, said Dr Manveer Singh, a pulmonologist at the nearby Energy Hospital. “The smoke from garbage burning was rampant and there was always a smell of dead animals hanging in the air,” he said.

Fumes from burning garbage reduced visibility on the roads as well, leading to accidents, said locals.

“The garbage smell can give nausea and headache to any new person visiting the area, but the fruit sellers and shopkeepers in the area are used to it now,” said Singh.

However, not many patients with a single prominent medical issue visit the hospital, he said.

“We are a private hospital and many people might not be coming here at all. Also, there has been no health study in the surrounding villages where a pattern linked to the landfill site could be found,” he added.

The area where garbage was dumped earlier is still known as a ‘trenching ground.’ Over five years, the entire area was reclaimed and in February 2022, Asia’s largest waste-to-CNG plant was established here.

With a production capacity of 17 tonnes per day (TPD) of bio-CNG, the ‘Gobar Dhan’ plant is fuelling 146 buses in Indore and intends to increase this figure to 400 buses by March 2023.

“That would mean that many diesel buses are off the road. A robust public transport system will also replace private vehicles,” Pratibha Pal, the commissioner of Indore Municipal Corporation (IMC), said.

“The level of micro-pollutants went down after they capped the legendary waste and has further lowered after the bio-CNG plant, but it is not yet over. If an air quality monitor is installed at Devguradiya, one will find that the situation is still horrible,” cautioned Singh.

On October 2, Swachch Sarvekshan 2022, conducted by the Union Ministry of Housing and Urban Affairs, recognised Indore as the cleanest city in India for the sixth time in a row.

“Our unique selling proposition this time was waste processing and thus the bio-CNG plant,” said Pal. The plant, called Gobar Dhan, is a public-private partnership between IMC and the private company Ever Enviro Resource Management Pvt Ltd.

It is processing 550 tons of the 700 TPD of biodegradable waste in the city. The total garbage generated in the city is 1,100 TPD. Gobar Dhan is built on 15 acres of land with an investment of Rs 150 crores.

The contract with IMC requires them to give 50 per cent of the bio-CNG produced for city buses at a rate of Rs 5 per kilo less than the market rate of compressed natural gas (CNG). The rest of the gas is being sold to Avantika Gas Ltd, the CNG and PNG supplier of the Indore region.

The IMC, on the other hand, is supposed to supply 90 per cent segregated waste to the plant for which the company has to pay them an annual royalty of Rs 2.5 crores.

“If it is not for the high-quality segregated waste that Indore has, this plant would never be able to make a profit,” said Nitesh Tripathi, project head of the Gobar Dhan plant.

Before Gobar Dhan, the city had two small-scale bio-CNG plants of 15 and 20 tons input capacity per day in Choithram Mandi and Kabit Khedi that cater to the fruit and vegetable waste generated by wholesale mandis.

IMC has already earned Rs 8.5 crores in carbon credits by replacing diesel buses with CNG and from the Choithram and Kabit Khedi plants, among other initiatives. Ever Enviro, the company running the plant, also plans to apply for credits for preventing fugitive methane emissions from the landfill site.

The IMC employs 600 vehicles for waste collection in the city and spends Rs 700 per tonne per day on segregating and transporting the waste to the compressed bio-gas plant. The cost of production of bio-CNG, according to the company, is Rs 35-40 per kilogram.

The main costs include electricity, maintenance and wages for about 100 people. The plant generates 20 per cent of its 13,000 units of power requirement from rooftop solar, while the rest is taken from the power grid.

“We could use biogas for power generation as well, but that turns out to be more expensive than sourcing power from solar. Besides, there is more demand for vehicular fuel in the market,” said Tripathi.

Besides bio-CNG, the plant generates 15 tons of carbon dioxide and 100 tons of organic manure as byproducts. While bottling of carbon dioxide for industrial use is still in the pipeline, the company sells their manure at a net rate of Rs 1,800 per ton.

Avantika Gas, which is sourcing 50 per cent of the bio-CNG at present, takes it at a government-mandated rate of Rs 56 per kg.

Gobar Dhan has a dedicated bio-CNG station at Devguradiya, where the city buses come for refuelling. To be managed by Avantika, two more stations are under construction at Vijay Nagar and Rajiv Gandhi crossing.

These stations, within the city limits, will be open for private CNG vehicles as well as buses, which will have to traverse less distance for refuelling.

“The Devguradiya station is eight kilometres off our route, which means for to and fro, the distance increases by 16 km. For 30 of our buses that run on bio-CNG, we end up spending on fuel for 450 extra kilometres every day,” said Madan Patidar, operator in charge of I-Bus, Indore’s rapid bus transport service.

Patidar gets Rs 5/kg discounted price on fuel, but the commute negates the discount.

There is a plan to inject the compressed biogas produced in Gobar Dhan into Avantika’s city gas distribution network via a pipeline. “This will be India’s first such pipeline under CBG to city gas gistribution synchronisation scheme,” said Tripathi.

Avantika will use this pipeline for its industrial consumers. The pipeline will also reduce the cost of gas compression and emission from the transportation of gas in trucks, Tripathi added.

The gas pipeline will support IMC’s efforts to reduce air pollution from 163 industries in the city. “We are motivating these industries to shift from coal-based furnaces to CNG/Piped Natural Gas,” said Pal.

Gobar Dhan has its own share of challenges as it implements a technology that is still nascent in India.

“Recently, we had to order a de-moisturiser that will press the moisture out of the digestate and will help it dry sooner,” said Tripathi when asked about odour still surrounding the plant.

“Some problems can only be handled when the plant operations start. Since we are a pioneer in this technology, we have only our own experiences to learn from,” he further said.

In the future, Ever Enviro plans to do all its operations in closed vessels, which will reduce the smell, said Tripathi.

“We will also have a negative draft in the gas-cleaning area to maintain negative pressure, which means the air will enter the precinct but not leave it. And special ducts will suck up the bad smell and pass it through filters,” he said.

This is the first of a three-part series on bio-CNG.