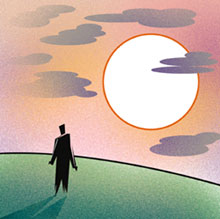 Just recall the million mutinies over dam projects, forest degradation, mining, industrial pollution and real estate development. But also recall how crucial regulations to protect the environment have been negated this year from provisions for environmental impact assessments to those for coastal zone regulation. Indeed recall how builders of real estate lobbied strenuously to weaken any provision that would regulate their development--over construction, water use or waste generation.

The fact is that these struggles for environment have come to be seen as the biggest impediments to quick and dirty growth in the country. There is a single-minded determination that focusses on the need to intensify the use of resources and that this will magically lift everyone out of poverty. In this obsession the problem is that there is no space for dissent. These voices of disapproval need to be destroyed and made powerless.

In this war for wealth, the weaknesses of the system are being optimised. We know that our institutions of governance are riddled with corruption, red-tape and debilitating inefficiency. It becomes easy to argue that their role must be minimised. It also becomes easy to insist that regulations must be removed or made 'simple' meaning diluted. For instance, the builders' lobby had argued, successfully that clearances of their projects was not just taking time but also leading to enormous corruption as they were having to pay for them.

What is never said is that these institutions have been made corrupt and compromised by these same lobbies. It is also never said that the challenge is to strengthen regulation and oversight, not to emasculate it. It is never said that this will require building capacities, hiring new staff, and training and creating new tools of management for our regulatory institutions. No, we want them written off. We are beginning to see this end game succeed.

Their protest should make us think again of this development, which can make such poor people even poorer. The problem is that modern industrial growth requires resources of the region--minerals, water or energy--not people. It does not provide local employment or economic benefits. It only takes away from the local region. In this process it displaces people; it degrades the land and water on which they survive. People know this. The votaries of growth-at-all-cost should also learn this.

The problem also is that when regulatory institutions are disabled, people have nowhere to go. They have no choice but to 'insist' that their voice is heard and they will get more desperate and more aggressive to make sure this happens. This spirals out of control as neglect breeds violence and violence breeds more intolerance. 2006 has been bloody, but 2007 will see more strife, not less. This is not good for the environment. It is certainly bad for the country.

This is not new. This is the manner of environmental protection that we have inherited from the already rich world. The action is to degrade the environment first and then to repair it later. Therefore, once the factories are built and wealth is accumulated, the pollution can be cleaned up. This world has found that it is investing more and more in cleaning up and fixing the damage but it stays miles behind the problems it creates. We want to do the same, but with much less means.

The world here is divided into areas that are kept aside for their rich biodiversity or natural habitats. These areas, the protected wilderness areas and habitats of wild animals, are leisure spots. In their well organised landscape, there is no messy poverty and certainly no inconvenient poor people. We would also like to do the same, but with different realities and deadly results. We will divide people. We will destroy the environment.

As I said, 2006 is the watershed year. It is a mirror of what our future will be. Let's discuss how we can change the present in 2007.