A fig for social concerns

The holy cow of structural adjustments holds supreme sway, leaving the people to shift for themselves 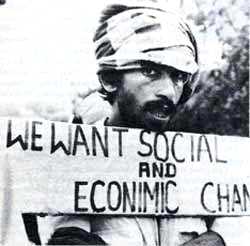 AS GOVERNMENTS the world over loosen their grip over their economies and markets go global, structural adjustments and a rapid economic transition has placed agencies like the International Monetary Fund (IMF) in the driver's seat. But the scenario of improving balance of payments and reduced debt crises goes hand in hand with the lowering of wages and dwindling jobs; one is driven to question whether the face-lifted budgets and the opening up of markets is tuned to induce some measure of accountability in a society.

The answer could well be no if the IMF's response to queries by representatives of the International Labour Delegation (ILD) during a meeting in Washington DC in February this year is taken as the ideology of the Fund. The ILD, evolved from a campaign that began in the autumn of 1992 at an international conference held in Moscow against the "designs" of the IMF and the World bank through privatisation, raised questions about the problems faced by workers and traders in 72 member countries.


The meeting in Washington started off with Murray Seeger, special advisor (external relations) to the IMF, steamrolling the demands of the ILD delegation to raise questions and suggesting everyone watch a film on the activities of the IMF. Left with no choice, the delegation stolidly sat through the film that explained how the Fund was started by people "who remembered the great depression" and how it was working for non-inflationary growth to promote sound economic policies. But as Daniel Gluckstein, national secretary of the Workers Party of France, commented, the film neglected to mention the consequences of the role that IMF is playing in the world.

Seeger was, however, quick to point out that the Fund had no responsibility for social consequences and its aim was only to get a country into growth track. "We do ask governments to adopt appropriate measures as things cannot go on as they do now."


The ILD representatives quizzed the IMF team over the possible connection between the political insurgency of the Chiapas as a fallout of IMF's "activity" in Mexico, the transition of Poland from a country plagued with shortages to a country with high availability but lesser people to buy the expensive goods, and the case of Latin America where wages fell by more than 60 per cent between 1988 and 1993.

Tafazzul Hussain of Bangladesh alleged that IMF has given a $300 million loan to Bangladesh on condition that most of the jute mills are closed and rest privatised. Seeger retorted, "The Bangladesh government realised that the jute industry was not viable. It was agreed that the government would set up a safety net to protect those who would lose their jobs. It is now up to the government to do so and up to the people to see to it that it is done."

Seeger's reply to the lowering of wages was also standard: "I deny that anything we do results in permanent reduction of wages or in jobs. All that we suggest to the governments is to set their house in order and not to subsidise unprofitable companies."

In fact, IMF could only quote 3 countries as examples where real wages have gone up in the past 20 years of the Fund's operation. In fact, the shortsightedness of the Fund's policymakers is exposed by a statement by Seeger: "IMF does not speak with the people but only with the central government." Whether the governments are paying attention to social costs and have planned safety nets or whether a consensus exists in the country over the policies advocated by the fund is not IMF's headache.

Seeger smothered ILD's arguments during the meeting by saying, "The people do not have to allow their governments to enter into an agreement." This is irrespective of the fact that the agreements have a bearing on internal politics and government policies are sometimes determined by considerations other than public opinions.