A land of their own

Society thinks women do not want to own land. That’s where it is wrong

In popular iconography, a farmer is a man with a moustache, wearing a turban and holding a plough on his shoulder. What about women farmers? A few months ago, my eight-year old-nephew asked, “Why do you need to qualify farmer to represent women far mers? Isn’t ‘farmer’ a gender-neutral word?” It was a valid question. De ca des ago, sociologist Bina Agarwal asked a similar question on behalf of women farmers, “Are we not peasants too?”

The land reforms and land regulation Acts have severely failed women in India, who own only 11 per cent of the country’s land. The Hindu Succession Act was amended in 2005, giving equal rights to daughters and sons. But there has been little change on the ground. Do women not want to own land? Do they not need land because they have little interaction with it?

Quite the contrary. Today, 75 per cent of India’s rural female workforce is engaged in agriculture against 59 per cent male workforce. A micro-level study in Himachal Pradesh shows that on an average a woman in India works 3,300 hours per year in the field, while a man works for 1,400 hours. But legally the Indian government does not accept a woman as a farmer unless she has a land title. 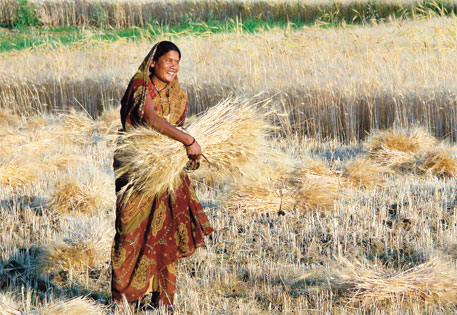 Interestingly, however, 75 per cent of the total 376 women respondents of the same sample area considered themselves farmers. They believed that they contribute towards food production.

Eighteen per cent did consider themselves second aid in the field, but the study also found that these women were underplaying their role because they did not have land titles. So the assumption that women do not want to own land or they have little interaction with land is wrong.

Research has suggested there is significant positive association between land rights for women, food security and reduction in malnutrition.

Such research has focussed on how property rights for women could aid development of the entire society. Such arguments fit in with a discourse where we want to educate women because they will educate an entire family or provide good nutrition to pregnant mothers so that they produce a healthy next generation.

These are important issues no doubt. But why should we discuss property rights only to bolster our arguments in favour of women as agents of change? Why should not property rights for women be an issue in itself? In a similar vein why should not education and nutrition for women be an issue in itself? Unfortunately, even much of women’s rights activism has not gone beyond the “women as instrument of change” standpoint.

So far we have talked about rural women and women farmers. What about property rights for urban women? There is ambiguity in statistics over women owning property in urban areas, but my hunch is that urban women are not doing much better than their rural counterparts. Urban women need land or a house of their own as it provides them private space and security.

Many studies argue that divorce is not a feasible option for many unhappily married women because these women lack economic entitlements. Land and a house to fall back upon are two key entitlements.

We do have progressive laws. But they are not enough. We need a social movement involving academicians, civil society and the public to upset the worldview which holds, “good women do not own land”.