Bread and games in India

We need spectacle in the capital, not mundane things like schools and hospitals in villages 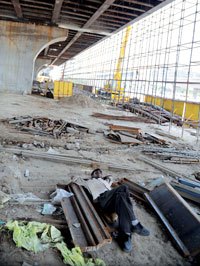 In the final years of the Roman Republic, the Senate kept the masses happy by distributing cheap food and staging big spectacles known as the circus games to get votes. In his satires, the Roman poet Juvenal observed witheringly that governance had been reduced to panem et circenses (bread and circus/games). He was referring to the Roman practice of giving free wheat to its citizens and mounting costly games as a means of gaining power, a practice adopted later by the Roman emperors. Entry to the games was also free.

Panem et circenses has been used through the ages and is a metaphor that finds fresh life in India 2,000 years after Juvenal coined it—to deride both the populace and the politicians. The big difference is that our politicians are craftier than the Roman emperors: here, bread is a Barmecide’s feast, an illusory bait, while the games can only be imagined by the poor since they are strictly off limits for anyone but the well-heeled.

So Rs 28,000 crore was spent, supposedly, to spruce up Delhi for the Commonwealth Games. Part of it was scooped out of funds meant for the scheduled castes and tribes. Another Rs 4,500 crore was used up to build and refurbish stadiums and other sporting facilities. So money clearly is not a constraint when the government wants to do something. Nor does it complain when contractors take it for a ride and inflate costs of projects. Like the new Delhi airport whose cost has soared from Rs 5,900 crore to Rs 10,500 crore and is now expected to touch Rs 16,000 crore. That’s almost trebling but no one is batting an eyelid. Not the Planning Commission, which at one time claimed it had reworked the contract so that the private builder could not make windfall profits from leasing out the government’s land, and certainly not the civil aviation ministry, whi ch seems to think passengers should foot the bill for the overruns.

That’s the way it works in this country, which is witnessing a brazen confluence of interests: parliamentarians who are businessmen and vice versa, hotshot corporate lawyers who are in and out of government when they are not representing the likes of Enron or, even more audaciously, acting as spokespersons for the ruling party even while fighting their own state governments on behalf of the Monsantos of the world. Then there are ministers who use privileged information to institute unseemly legal suits when out of office and, when in government, bring in ordinances to overturn the orders of the Supreme Court just to protect vested interests. And there is the powerful bureaucracy, whose leading lights hop onto corporate boards immediately after quitting service to champion more openly the interests they have served while in office.

The influences operating now are in marked contrast to what was the rule during the time of the Roman Empire when it was easy to say where power was located. Emperor Cato had no doubts about who was in charge when he noted: “When Cicero speaks, Romans marvel; when Caesar speaks, Romans march.” Canadian political scientist Donald Savoie has an interesting thesis on this subject in his book Power: Where Is It? Unlike in the Roman world, Savoie says, it is next to impossible to unravel the tangled web of influences such as globalisat ion, corporate interests, the judiciary, media and super-bure a ucrats. In his study of the major western democracies, Savoie finds power does not reside with the voter or with the majority of the politicians but with a super class of powerful leaders and their advisers who dominate the institutions of governance.

These are the same centres of influence that lash out at the panem component in India: the well-ensconced, logical economist; the powerful bureaucrat; the highly visible and persuasive columnist, all of whom say that the cost of supplying bread (wheat and rice, in this case) to the poor is a pointless drain on the exchequer. The cost of the public distribution system, about Rs 55,000 crore last year, is, they say, one of the great burdens of the government and one which should be shrugged off. That the bigger damage is inflicted on public coffers by sleight of policy is something they would rather brush under the carpet—even if the regulators and auditors are screaming blue murder.

One example: the Rs 70,000- crore loss caused to government by the controversial award of 2G spectrum to certain business interests. As for circenses or the games, few seem to find odd the scandalous sums expended on the Commonwealth Games. After all, isn’t sport proving to be a lucrative source of slush funds? Remember the furore (short-lived) over the food minister being linked to the IPL bidding irregularities? Call it a striking example of bread and games coming together in a dubious fashion. So why bother with schools and health centres in thousands of villages when we can have such fun and games in the capital? The poor in any case can’t afford the spectacle.