Eastern coast of India to witness heavy rains this week

Bay of Bengal likely to host a tropical depression

Bay of Bengal likely to host a tropical depression

This means a total of 20 low pressure systems have been recorded in the north Indian Ocean (Arabian Sea and Bay of Bengal) this year. It looks like one more such system may cause the figure to rise before the curtain falls on 2014.

A fresh low pressure system is visible off the shores of Tamil Nadu in the Bay of Bengal. Monday morning’s surface weather map from Thai Meteorological Department  suggests that the mean sea level pressure of this low pressure system is about 1,008 millibars. Weather models like Global Forecast System (GFS) continue to show that this system would intensify slightly as it moves close to the eastern coast of India this week. 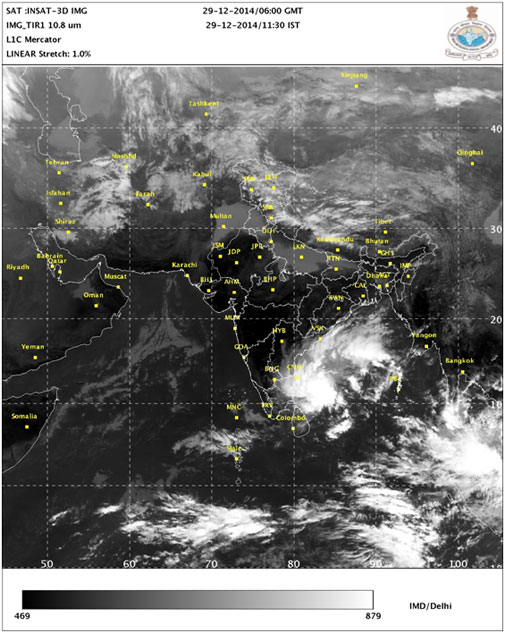 The winds at the upper level (around 30,000 feet above the sea level) would steer this low pressure system. Hence, this system would threaten the eastern coast of India—coastal areas of Andhra Pradesh, Odisha and West Bengal—between Tuesday and Saturday.

The good news is that the Bay of Bengal will not support its intensification into a cyclone as it is December. The Bay of Bengal or any other sea is usually less productive during the winter months. This is because sea surface temperatures are not high enough for cyclone development. Winter also means lesser moisture is available and hence, low pressure systems find it difficult to intensify into tropical cyclones.

The sea surface temperature (SST) in much of Bay of Bengal right now is around 28°C. When the cyclone season is most active, the SST is as high as 30°C.

According to this model, the system can intensify to the strength of a tropical depression. In their Monday morning update, India Meteorological Department (IMD) said that this system may further concentrate into a depression during the next 48 hours.

Relief from cold in central India

Central India is experiencing intense cold weather as of now. On Monday, Nagpur in Maharashtra recorded an all time low of 5°C. This is lower than the record low of 5.5°C seen 46 years ago.
But the low pressure system in Bay of Bengal will influence weather in central India this week. Minimum temperatures would settle between 15 and 20°C at most places. Vidarbha in Maharashtra can also expect cloudy weather and rains around Thursday or Friday.

A trough (elongated low pressure region) is going to arrive and land over western Maharashtra around Thursday. This low pressure would attract moisture from the Bay of Bengal low pressure system and set the stage for a weather outbreak. Initial estimates suggest that severe thunderstorms and possible hailstorms would be witnessed in western and central Maharashtra (around Nashik, Marathwada and Pune) between Thursday and Saturday. The picture would become clearer in the coming weather model updates and hence, people in these areas must watch out for the latest weather news.