The sun has been revered as god in ancient civilizations around the world for millennia. The early goddesses of the ancient Egyptian pantheon carried the sun above their head as a symbol of dignity. The ancient Egyptian king Kufu's elaborate ship buried in the Giza pyramid complex around 2500 BC stands even today as a testimonial to symbolize the function of a solar barque. Even the early western religions revered the sun goddess Sol after whom Sunday has been named in English.

Ancient Sanskrit texts refer to the sun as mitra (friend) with unwavering warmth to light up humanity. Temples have been dedicated to sun god Surya in Gujarat, Rajasthan and Orissa since it is the most prominent of the navagrahas (nine celestial entities of Hinduism).Although Hindus worship Surya as the chief solar deity, incinerating corpses using solar energy has not been practised due to lack of technology to produce the intense heat needed to incinerate a corpse. Now it seems that solar rays can help in man's last journey.

During my recent field visit to Gujarat in January 2009, I was invited by a close friend, Hasmukh Adhia, to visit the Muni Seva Ashram on the outskirts of Vadodara. The ashram has been doing social work and working on renewable energy for the past two decades. I was fascinated to see not only the prototype of a solar crematorium but also to witness a world-class cancer centre.

The most intriguing renewable energy device that I have seen so far is the solar crematorium. It consists of two 50 sq m parabolic dishes--one ground level and another standing 13.5 m tall. The ground-based dish faces north, deflecting the light on to the solar pyre box from below while the standing dish faces south, concentrating the solar rays from the top. The objective of the device is to focus maximum solar power at a single point. The solar dishes are made of glass and steel with a cost of Rs 10 lakh; they reflect the powerful sunbeam towards a specially designed coffin. The parabolic dish with acrylic mirrors traps the energy from the sunlight and then reflects it on to the solar pyre box.

The huge dish creates energy of about 16 kW per hour with the temperature reaching 1000oC. The solar crematorium project was originally envisioned by the Satya Sai Baba Trust located at Valsad in southern Gujarat. Solar energy experts, Wolfgang Scheffler from Germany and Deepak Gadhia from India, have been supervising the completion of this unique project at the Muni Seva Ashram. 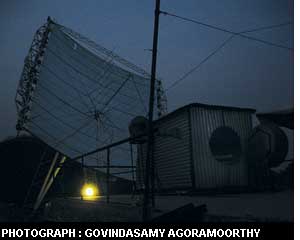 After seeing the solar crematorium, Hasmukh Adhia rightly pointed out, "It is the best way to be reunited with Surya." I agreed instantly. I felt the solar device will serve as an ideal substitute for other ways of cremation involving non-renewable energy fuels--oil, gas, coal, or wood. This amazing renewable energy device has in fact great potential to be used in India's ancient cities like Varanasi, which lies on the banks of the national river Ganga. A large number of cremations take place here daily using firewood. This device, when it is operational and when it is accepted by the people of India, would save about 300 kg of firewood used for each normal cremation? ultimately cutting down the emission of greenhouse gases.

Many Hindus still believe ending life's journey by the Ganga in Varanasi assures salvation when the ashes are carried away by the current of the holy river. The solar crematorium provides the ultimate opportunity for those who clamour to be symbolically reunited in death with Surya.