Where did the Rs 100,000 crore pumped into drinking water supply go? 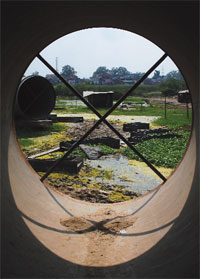 While we know the reasons for slippage for sure, its socio-economic cost is yet to hit home. India’s total expenditure (since Independence) on drinking water and sanitation would reach Rs 100,000 crore by 2012. And since water-borne diseases are a major reason for rural morbidity, slippage also has a social cost. Interest in measuring the costs of slippage in India is growing. Those involved in such studies say this will show what a sustainable rural drinking water project would cost.

Economists K Pushpangadan and G Murugan of the Centre for Development Studies in Kerala measured the socio-economic cost of slippage in rural drinking water coverage in India. They took into account the magnitude of slippage, number of people affected and the cost of per capita coverage in 32 states and Union Territories that had reported slippage during 1993-2002. They found the total cost of slippage for the period was Rs 1,621 crore, calculated at 2007 rates.

At the same time, lack of easy access to drinking water has been breeding a corrupt system. This is an enormous economic burden for the poor. In 2008, a study by the Delhi-based Centre for Media Studies in collaboration with Transparency International India found that below-poverty-line (BPL) households were spending a substantial amount of money as bribe to get drinking water. The study that covered samples from across the country found that BPL households paid Rs 2,390 lakh in bribes. “Occasions for bribery were installation/maintenance of hand pumps, meter installation, pipe repair, supply of irrigation water, etc.,” said the report.

As pointed out earlier, unsafe water increases health risks and accompanying expenditure. If out-of-pocket health expenses are factored into poverty measurement, rural poverty would rise by 3.6 per cent, according to an analysis by Indrani Gupta of the Delhi-based Institute of Economic Growth. She carried out the study for the Planning Commission’s Expert Group on Poverty. Gupta analysed the consumer expenditure data and health expenditure data gathered through two rounds of the National Sample Survey Organisation. She found both rural and urban poverty increases when out-of-pocket health expenditures are adjusted in poverty measurement. In fact, rural poverty rises more than urban poverty. Data from both the survey rounds (55th and 61st) showed similar results. “These results indicate that out-of-pocket expenses are more poverty-inducing in rural areas than the urban, and their impact on poverty has increased over the years,” states the analysis.

Slippage is not a new phenomenon but it has become more pronounced. This indicates fundamental problems in the way we design our programmes and policies. The guidelines for the national rural drinking water programme adopted in 2009 did recognise the problems. The biggest problem is that water sources are either drying up due to less recharge of groundwater—it meets 85 per cent demand—or water is not available round the year. Going by government’s own reasoning, 40-50 per cent of the slippage happens because of this reason. But these sources invariably do not come under the department of drinking water supply. To curb slippage and the huge socio-economic cost, the rural drinking water programme must seek convergence with conservation of water sources.