Policymakers must focus equally on all 3 sectors: Agriculture, industry, services

The Prime Minister of India laid down the target of making India a $5 trillion economy by 2024-25, something that stimulated debate and discussion among economists and policymakers who sought roadmaps to attain this optimistic economic goal.

Will India attain its dream of a $5 trillion economy and if yes, when? What should be done to propel the Indian economy to the $5 trillion gross domestic product (GDP) club?

The Union government announced reforms and stimulus packages to address macroeconomic setbacks. They are, however, primarily considered a redresser for supply shock than for the demand shock that India currently faces.

A counter-argument to this is from JB Say’s law that says supply creates its own demand. Stimulus and resultant growth in a certain productive sector is expected to create demand in the economy at large and lift up the overall economic growth trajectory.

This justifies the effectiveness of the government’s supply-side stimulus to revive demand and, in turn, the economy.

It is necessary to empirically diagnose India’s growth pattern to meet the ambitious objective of $5 trillion GDP from the current level of $2.9 trillion in 2019-20. In this direction, the GDP growth trajectory and the pandemic’s impact on it are analysed.

This implies exchange rate-adjusted compound annual growth rate (CAGR) of about 13.5 per cent — close to NITI Aayog’s projection of 11.5 per cent. It must be heeded, however, that this estimation of desired growth rate (CAGR) to attain the GDP objective is devoid of the COVID-19 impact.

In fact, the ambitious target of $5 trillion GDP was set prior to the COVID-19 pandemic. The onslaught of COVID-19, followed by the nationwide lockdown in the first quarter of 2020, has made India’s $5 trillion GDP target surreal.

Global uncertainty, disrupted trade and spiking the exchange rate to Rs 77 from Rs 70.39 per dollar swell the impossibility of achieving this target.

Amid macroeconomic shocks and uncertainties, many national and international institutions and rating agencies have released revised GDP growth forecasts for 2020-21.

Standard and Poor’s Global Inc, Fitch Solutions Inc, the World Bank and the Reserve Bank of India (RBI) released negative growth projections between -1.5 and -5 per cent.

Moody’s Investors Service Inc and the International Monetary Fund posited non-negative growth numbers of 0 per cent and 1.9 per cent.

Most projections from institutions and agencies, however, have a consensus on a growth outlook above seven per cent for 2021-22. This is because of fiscal and monetary stimulus and reforms announced by the Centre accompanied by the unravelling of pent-up aggregate demand in the economy.

Incorporating the adversity in GDP growth due to the pandemic, we considered a conservative GDP growth rate of -3.2 per cent for 2020-21 relying on the World Bank’s estimate and RBI’s negative territory forecast.

It is inevitable that subdued growth of $5 trillion target trajectory in 2020-21 will either devolve the growth pressure to subsequent years or push the target year to a later period.

The unrealistic-looking projected growth rate of 18.1 per cent prompted us to investigate the alternative to attain the $5 trillion target which is, naturally, a postponement of the target year.

In the post-COVID-19 period, the economy is expected to recover and revive as argued by multilateral institutions, rating agencies and economists, including the Centre’s chief economic advisor.

Economists went ahead and said the Indian market will emerge stronger than ever post-COVID-19, given liquidity support and future demand.

The effectiveness of these stimuli and reforms, however, depend on their implementation and thus remain debatable.

Given this, from 2021-22, we postulated the economy’s productive sectors to follow their respective historical growth trajectories of the previous five years.

Therefore, agriculture, industry and services are expected to grow annually at their historical average of about 7.5 per cent, 9.0 per cent and 11.4 per cent respectively.

This looks more realistic and acceptable than the 18.1 per cent annual growth rate derived and discussed earlier.

Further, our analyses with different GDP forecasts for the COVID-19 impacted year reveal any projected GDP growth rate between -5 per cent and four per cent during 2020-21 pushes the $5 trillion objective by three years further.

The discussion on GDP growth trajectory, with COVID-19 impact and without it, is visualised below. 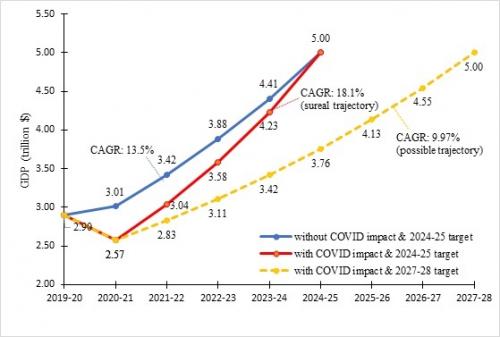 The ambitious $5 trillion economic objective intends to provide stimulus in the economy while raising several pragmatic challenges to achieve it.

This objective can be achieved by providing appropriate fillip to the growth of productive sectors that are drivers of the services-led Indian economy.

The analysis revealed that the growth — attained by present GDP growth patterns — is far from the growth target required to attain the $5 trillion objective.

The unexpected impact of COVID-19 adds to the peril and makes the $5 trillion GDP target by 2024-25 surreal, pushing it three years further.

It is possible to attain this target by 2027-28 when there is a recovery in the economy during the post-COVID-19 period, coupled with a consistent growth in productive sectors over the years.

Agriculture, industry and services sectors have to recover post-COVID-19 and at least exhibit their respective five-years’ growth average of about 7.5 per cent, nine per cent and 11.4 per cent respectively.

This growth pattern portrays the continuation of dominance of the services sector’s GDP contribution.

Historically, the services and industry sectors showed a high correlation with overall GDP growth rate. They, however, need consistent stimulus for growth.

Policymakers must focus on all the three sectors equally without resorting to a focus on any particular sector.

Along with the individual growth of a sector, its dynamics with other sectors and its contribution to the economy are equally important.

This can be achieved by attracting foreign direct investment by strengthening regional innovation systems that will, in turn, encourage local firms to move towards networking, innovation and internationalisation.

Swapnil Soni is a senior research scholar at Indian Institute of Science, Bengaluru.