Fix what is broken 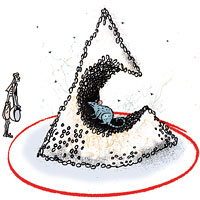 The high corridors of the nation are abuzz with talk about how much food should be given to the country’s poor as a right. Should it be 25 kg of rice or 35 kg of wheat a month per person at highly subsidized rates?

Then they worry who should get this right to food. All who are poor, the very poor or the poor but not so very poor? This haggle over the below poverty line (BPL) and above poverty line (APL) seems to miss two crucial points. One, that the government does not know how to enumerate its people in terms of poverty. Two, there is no fixed and absolute line dividing the poor and not-poor. Subsistence economy of the poor is such that they are always at the risk of slipping down the poverty curve. One failed monsoon or crop, or one episode of illness in the family could dictate the difference between APL and BPL.

Even as economists and policy wonks are busy haggling, a huge amount of food is rotting in the country. Some 18 million tonnes of food grains are lying in the open or kept without adequate protection just because the government does not have storage facilities. Worse, a large number of people are going to bed hungry because the food, which is in the hands of their government, is not reaching their homes. Everybody agrees that the public distribution system is not working. It is badly broken.

But the policy discussion is not about how this system should be made to work. There is a belief that the system will work because of proposed improvements through new-fangled technologies—GPS to track the trucks that deliver food; electronic biometric cards to track delivery in the hands of the poor. I have nothing against smart solutions, but these miss the point. Technologies work in the hands of people. The system of delivery is broken because we have neglected the repair of our administrative system that has to make any programme work. The challenge lies in ensuring accountability at the very bottom and top of our delivery operations, addressing the personnel requirements, and in making sure that what has to be done is done. This is the old-fashioned governance route that nobody wants to take. Technology cannot be a silver bullet if there is no working gun to fire from.

This is what my colleagues learnt when they investigated the working of the public distribution system in Chhattisgarh and Tamil Nadu. There the system has been made to work against all odds that beset other states. Why and how? The states have introduced many reforms— from cleaning up and computerising the ration card list to computerising the procurement of grain and its transport to the fair price shops. But most importantly, they have invested in systems that make officials accountable for delivery and make people aware of their rights. The bottom line is that there is political will at the highest level to make the system function. And there is obsession at all levels to make sure it does.

Fix what is broken; don’t just shop for something new. We forget this simple rule as we make new plans and new programmes and even set up agencies to sidestep the basic problem. Take the matter of pollution control. We know that the institutions that manage pollution—the pollution control boards—desperately need more staff, better technology and facilities, and personnel and administrative reform. But fixing this system of administrative governance is time consuming, and it brings no accolades to the political reformer. So instead of fixing what is broken, the talk now is to build a new institution —the National Environment Protection Agency. The other option is to simply bypass the need for regulation by suggesting technology solutions to polluters. The system is so out of shape that it cannot be repaired, is the belief. But a new institution will also need the same reforms and same funds and facilities that will make the old one work. Sophisticated technology for self-monitoring will need even more sophisticated and well-informed regulators for its management.

The other dream reform is to invent new institutions— called authorities—to sweep the mess under some mythical carpet. But there is no effort to check if the structure of the new creature permits management or accountability. Then we rue that they don’t deliver. Take the Food Safety and Standards Authority. It was set up, through legislative order, to fix the food regulatory system in the country. But it has no head; nobody can hold it accountable because it reports fictionally to Parliament, where no clear structure for management has been created. It has little technical competence. Existing agencies involved in the business of food standards, like the Bureau of Indian Standards, have been left out of the new authority. But it does have a swanky new building and powerful new friends in the food business.

A new programme, some promised (repackaged from old schemes) money, a new authority and new buildings, all add to the grand illusion that the problem has been solved. And that government is busy at work. Let us only hope that more people see through the hoax. The business of pretend government must go.