Gujarat has received encomiums from many quarters for its rapid industrialisation. Industries have mushroomed all over the state, thanks to investment campaigns like 'Vibrant Gujarat'. Many areas have been set aside as special economic zones (sezs). But industrialisation has its flipside. It's rapid pace has increased pollution and intensified livelihood loss. And it is quite obvious that not everybody is happy with Gujarat's industrialisation. There have been protests in many parts of the state of late.
People in Rajula, a coastal taluka in Amreli district in Saurashtra region, are among the disaffected. Rajula is home to a large number of economically and socially backward communities. People here rely on agriculture and cattle breeding for livelihood.

The area has many industrial units including three large-scale industries Gujarat Pipavav Port Limited, Ultratech Cement Limited and Gujarat Heavy Chemicals Limited. Pollution from these industries has affected the ecology of the taluka and people here have already lost much of their land to the companies. Pollution has led to a fall in agricultural productivity. Salinity ingress has compounded the problems.
In January 2007, the Kolkata-based Visa Power Limited signed a memorandum of understanding with the Gujarat government for setting up a 1,000 mw coal-based power plant at Rajula. The plant is estimated to come up at a cost of Rs 4,000 crore. The company claims that the 300 hectares earmarked for the project is mostly barren, but the people say the area includes fertile farms too.

On February 23, 2007 the company issued land acquisition notices to 800 farmers in three villages--Kadiyali, Bherai and Bhachadar--in Rajula. It sought to buy land as per the current market rate from the farmers. The people were asked to show up at Bhachadar Gram Panchayat office on March 7, 2007. The farmers were warned that their land would be acquired as per the Union government's land acquisition rules of 1963. 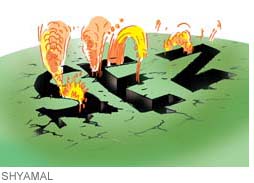 The shocked farmers contacted ngos and tried to bring the matter to the notice of the media. On March 2, a leading Gujarati daily, Gujarat Samachar reported the matter, following which the company and the administration went into a damage control mode. Over 3,000 farmers took to streets on March 5, 2007 and submitted a memorandum to mamlatdar of Rajula. The memorandum was also forwarded to the Gujarat chief minister, agriculture minister, revenue secretary, district collector, block officers, and mlas and mps.

In the memorandum, the farmers said that the company is going to acquire very fertile land, imperilling the livelihoods of 10,000 people. Land used for grazing and other wasteland used for animal husbandry will also get affected, the protestors said.

Visa Power claims that it will also provide employment to the villagers. But many of the villagers are unfit for skilled labour in industry. Besides, farmers apprehend that a loss of land will be accompanied by a fall in social standing. Visa Power also tried to put pressure on the people to change their ways. But the local protests forced them to postpone the March 7 meeting.
This seems a temporary respite. The issue of land acquisition remains unsolved. Rajula also raises a few uncomfortable questions. How could a company issue notice for land acquisition? Is this allowed under Vibrant Gujarat?

Official data on industries coming under sez and the Vibrant Gujarat campaign are incomplete and misleading. Going by the official estimates only 3,360 people will get employment in Rajula. But will this compensate the loss in livelihoods of 10,000 agriculturists?

Rajula is just one example of the depredations wrought by Vibrant Gujarat. It's imperative that the government rethinks its land acquisition policy. Fertile farmland must be spared. Or it's curtains for Gujarat's agriculture.