Government must introduce stringent rules as unused antibiotics continue to be dumped in the open, adding to India’s burden of antimicrobial resistance 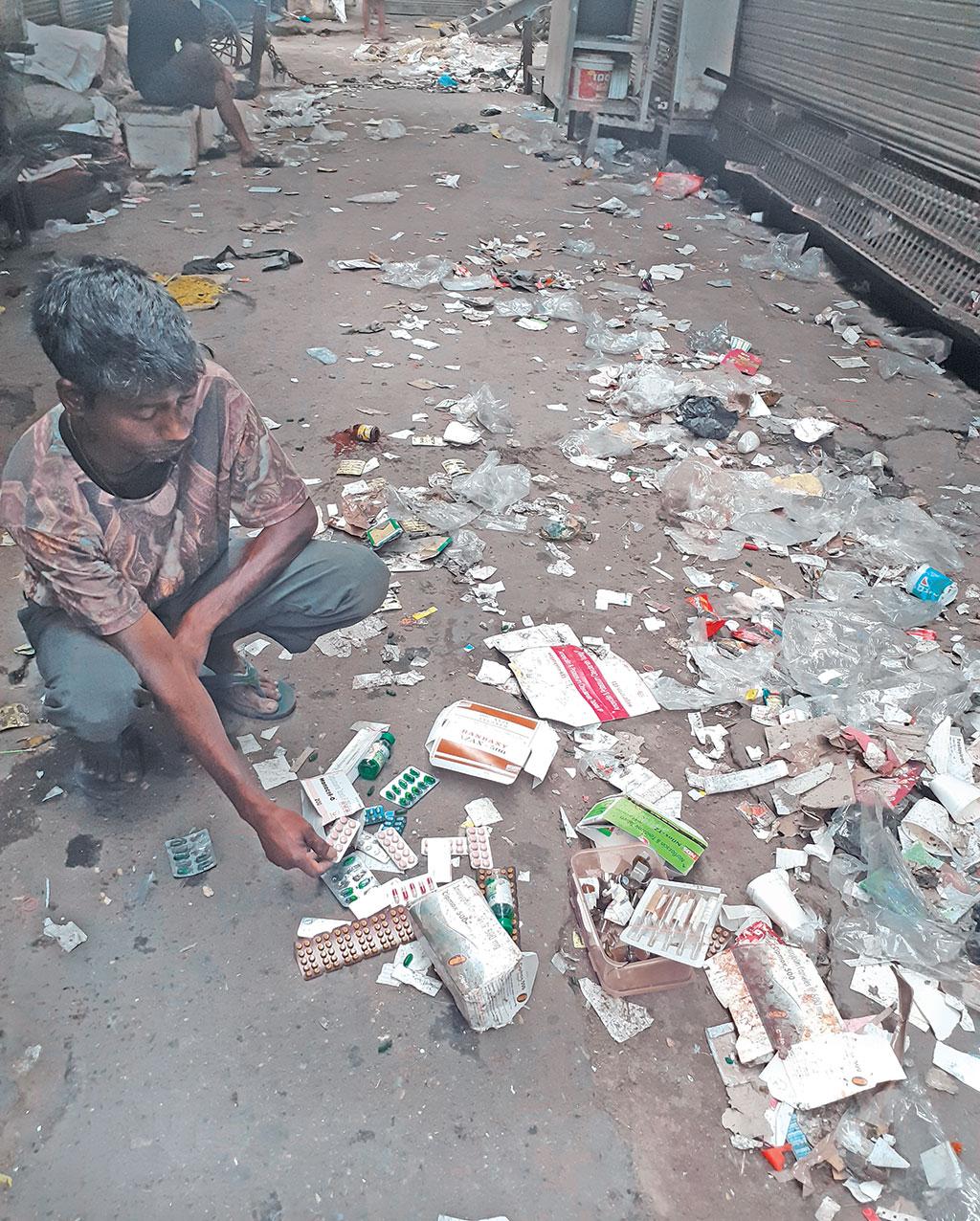 Discarded drugs litter the lanes of Bhagirath Palace, the largest wholesale market of drugs in the country (Photographs: Divya Khatter)

The practice came as a rude shock to Bachaspatimayum Debkumari, upon her return to India after spending five years in Belgium. The tiny European country is known for managing its waste well. People there are particularly careful while disposing hazardous substances like expired and unused drugs.

“I used to store unused drugs in a box and take it to a drug store for disposal,” said Debkumari, who now lives in Delhi’s Vasant Kunj locality. “But here, even if I carefully segregate domestic waste and pack unused drugs in separate bin bags, garbage collectors mix those with general waste and dump in landfills,” she added.

Being a researcher in biological sciences, Debkumari is aware of the hazards pharmaceutical products can have on the environment. Studies show that careless discharge of drugs, particularly antibiotics, into the environment could be spurring the development of superbugs that are resistant to most antimicrobial drugs.

Globally, some 700,000 people die of infections caused by such resistant pathogens every year.

The Municipal Solid Waste Management (MSWM) Rules, 2016 categorises expired drugs as domestic hazardous waste and requires those to be segregated and stored in separate bins and disposed in accordance with the Biomedical Waste Management Rules, 2016 that say the drugs be incinerated at high temperatures.

But are these being followed? To understand ground realities, researchers at the Centre for Science and Environment (CSE) in Delhi interviewed residents and drug store owners in Delhi and the National Capital Region (NCR) and visited dumpyards. Their findings are disconcerting.

While most people interviewed by CSE were not aware of the impact of careless disposal of unused drugs, some had only vague ideas about it. “Medicines should not be dumped in the open as stray animals tend to feed on those and get poisoned,” said Nagesh Parmar, a homemaker from Faridabad, Haryana.

Yet, she disposes unused drugs along with domestic waste, which gets picked up by an informal collector and dumped along a nullah or at the collection site of Municipal Corporation Faridabad (MCF).

A visit to the site shows syrup bottles and tablets without packaging scattered all over, with animals and humans combing through heaps of trash for food and livelihood.

“From here, the waste goes to Bandhwari dumpsite located 20 kilometres from Gurugram. At the dumpsite, the waste is spread around and levelled using rollers,” said Devendra of Ecogreen Energy, an integrated waste management company that has tied up with MCF for collecting waste from the twin cities.

A 2017 survey by the Central Pollution Control Board (CPCB) shows leachate from the dumpsite, which received 1,200 tonnes of waste a day, has polluted groundwater in surrounding areas.

“Leaching of pharmaceutical substances into groundwater and their spread can be a potential source of antibiotic pollution and lead to antimicrobial resistance,” said Satish Sinha, associate director at Delhi-based non-profit Toxics Link.

Such poor management of hazardous waste is primarily due to lax enforcement of MSWM rules. Several cities are yet to adopt MSWM bye-laws that mandate segregation, storage, delivery and collection of municipal solid waste, including discarded medicines.

A senior official at the North Delhi Municipal Corporation, however, said: “It’s going to take us a few years before we are able to achieve wet and dry waste segregation. Hazardous waste segregation will have to wait.”

But what about those who deal with drugs in large quantities on a daily basis? To understand this, CSE researchers visited wholesalers and retailers across Delhi-NCR. At Bhagirath Palace, the largest wholesale drug market in the country, CSE researchers found all kinds of drugs strewn on the streets; most were antibiotics.

“Every morning, we clean up the streets and dump all discarded drugs at the municipal dumpsite,” said Dinesh, a waste picker. Dealers said branded drugs are returned to suppliers once they near expiry. “But generic drugs cannot be returned. The only option is to throw them away,” said owner of Reet Pharma. “Even cut strips are not taken back,” said the owner of a drug store at Yusuf Sarai. 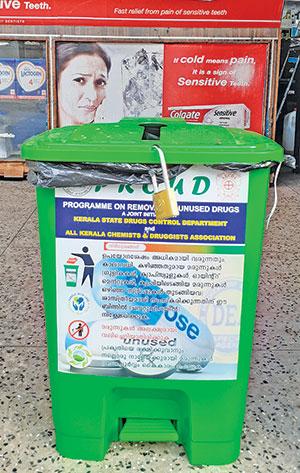 The practice does not change much beyond Delhi’s border. “We burn drugs, dump them in nullahs or dispose them along with general waste,” said Shanvaj Khan, a pharmacist in Faridabad.

Surprisingly burning is considered a legitimate way of disposal by some. A sales boy at a medical store at Sharma market, Noida, said: “We ensure to make a video of burning drugs as a proof of destruction for drug inspectors.”

At the wholesale market in Nai Basti, Ghaziabad, Naveen, owner of RIS Pharma, preferred disposing of the expired drugs at municipal dump sites.

A senior official at the drug regulatory body of India, the Central Drugs Standard Control Organization (CDSCO), is confident that the Drugs and Cosmetics (D&C) Act has laid down all provisions to deal with unused drugs in the supply chain.

But an analysis of the law shows that Schedule M of D&C Act talks only about separate storage of expired drugs and is silent on their safe disposal.

The National Formulary of India (NFI), a manual by the Indian Pharmacopoeia Commission, suggested the return of unused drugs from retailers to wholesalers and producers. But since it is non-binding, drug inspectors do not perform regulatory checks.

For disposal of drugs in small quantities, NFI recommends cumbersome ways like mixing those with used tea and coffee grind before discarding. But this only adds to the antibiotic pollution.

Under MSWM bye-laws, municipal corporations are required to collect unused drugs from retailers and wholesalers in a separate black bin, but this too is lacking.

Funding is sourced either from the manufacturer or from all those involved in the supply chain. “In Belgium, cost sharing among pharmacists, wholesalers and the industry is a legal responsibility,” said Kristof Bonnarens, research manager at pharma.be, a group of pharma companies in Belgium.

“The philosophy is medicines are not common household items. So, they should follow the same supply chain back even after disposal,” said Bonnarens. “The practice prevents secondary trade of medicines,” said András Miklósi of Recyclomed, a drug take-back PRO in Hungary.

Early this year, Kerala launched a similar initiative, though on a pilot basis. Named, Program on Removal of Unused Drugs (PROUD), this joint initiative of Kerala’s State Drug Control Department and the All Kerala Chemists and Druggists Association (AKCDA) aimed to address improper disposal of drugs by households.

Under PROUD, tightly locked kiosks have been placed near select pharmacies, bus terminals and markets in Thiruvananthapuram where people are encouraged to deposit unused pharmaceutical products. The waste is then sent to a common biomedical waste treatment facility run by Ramky Energy and Environment Ltd in Mangalore for incineration.

By October, some five tonnes of unused drugs were collected under PROUD. As of now, AK Mohan, president of AKCDA has agreed to fund the initiative for a year at Rs 10 lakh. “With our limited resources, we may not be able to bear the responsibility for long,” he says. CSE researchers reached out to a few officials working with pharma companies and asked whether they would fund collection and disposal of unused drugs under EPR. Some agreed while others expressed reluctance citing financial crunch.

This is disappointing at a time when the National Action Plan on Antimicrobial Resistance (NAP-AMR) recognises the need for a provision like EPR. Recently, while urging states to establish AMR as a priority, NAP-AMR has called for development of policies and implementation mechanisms for safe disposal of unused and expired antibiotics.

An EPR provision will enable smooth take back of branded and generic drugs through the supply chains as compared to the complicated process of segregating medicines from municipal waste. Manufacturers can execute the entire process of collection, transport and disposal themselves or by outsourcing it to a PRO. Dinabandhu Gouda, scientist at CPCB, said a drug take-back programme is very much feasible in the country.

CDSCO shall ascertain revision of the Drugs and Cosmetics Act so that it aligns with the new EPR provision. Moreover, ensuring effective implementation of EPR would require participation from consumers. But under such a provision, consumers may not be mandated to safely dispose unused drugs.

So the municipal corporation should work towards efficient segregation of hazardous medicinal waste at the source and create awareness on the subject. Involvement of other stakeholders like drug regulatory bodies, pollution control boards, local bodies, civil society and self-help groups are vital in proper implementation of EPR on the ground.

PROUD in Kerala has innovated ways to handle disposal of unused drugs. Other states should now consider piloting similar drug take-back projects. They should also recognise the need for EPR in their state action plans.