Last man standing: A workshop that was more than inspiration for environment journalists

Ten years ago, Chandrakant Pargir, a journalist working with Hindi newspaper Chhattisgarh, heard about the fish dying in the Jhumka reservoir of Koriya district. This was serious because the reservoir and the canal originating from it were the lifeline for thousands of people. On probing, he found that black water from the adjoining coal mine was being discharged into the reservoir. Not leaving the matter there, he further investigated and found that the coal mine had a water treatment plant that was required to clean water with alum (aluminum sulfate). “I found that alum had not been used for months. In fact, there was no stock of alum in the treatment plant,” says Chandrakant.

That was for the first time Chandrakant reported on the subject, and has since, written on the issue repeatedly. “Sometimes, there is a little action, but the issue remains open and every now and then I find black water and write about it again,” he said.

Chandrakant was at the two-day workshop organised by Delhi-based non-profit Centre for Science and Environment (CSE) in Bilaspur to augment the capacity of journalists to report on environment. Many of them expressed their disappointment about official and action not happening as a result of their published stories.

The seemingly simple environment reporting can be complicated and a journalist needs to not only be aware of all that is visible—such as polluted rivers, mining, deforestation—but also what does not show on the surface. Richard Mahapatra, Managing Editor of Down to Earth magazine and a key resource person at the workshop cited the case of a curious story from Indore in which a reporter was sent to cover the generous “free treatment” for cancer patients. “The reporter found a positive story. I insisted that he should continue to search while we did some backend investigation. Bingo! The truth popped up. It was a story of a foreign company conducting drug trials in the guise of giving free medicine to cancer patients,” said Mahapatra.

Another resource person and a lawyer Sudha Bahradwaj narrated an account of several cases which she had taken up. She spoke about the case of Chhuri village in Korba district where a new power plant came up after completely steam-rolling community resistance. “The government used its abundant authority to stymie the protest. When the government sought to acquire land for the power plant, the village community resisted. However, using rules to bypass the community, the village was turned into a “town” overnight through an order which no longer made it necessary for the government to seek the community’s willingness to give up their land.”

The people continued to protest and some of them were jailed on the basis of a complaint. The power station, owned by the Vandana group, now stands tall in the vicinity of almost ten other power plants that pollute the air of Korba.

Many of environmental issues are rooted in violations of human rights as well as lack of understanding among communities of the complicated government rules and regulations.

Laxmi Kant Chauhan, another resource person, described the situation in Korba where he takes up cases on environmental matters. Chauhan said, “The government has a view on what development should be. Even if it is at the cost of environment and the well-being of local communities, it ignores people’s opinions and goes right ahead,” he said.

CSE’s Sanjeev Kanchan, who recently worked on a report on the “green rating” of the thermal power sector, gave a detailed account of the performance of power stations that the non-profit’s latest research had covered. It set the stage for a visit to Korba the next day, the district where more than 6,000 megawatts of electricity is produced by around 10 thermal power plants.

We first visited the Chhuri village in Korba district. In what was an ideal convergence of theory with reality, the team made its first stop at the Navodaya Vidyalaya which shares its walls with the new power plant owned by the Vandana group. The team met Vinod Kumar Pandey, an activist, who has been to jail for his opposition to the power plant project. 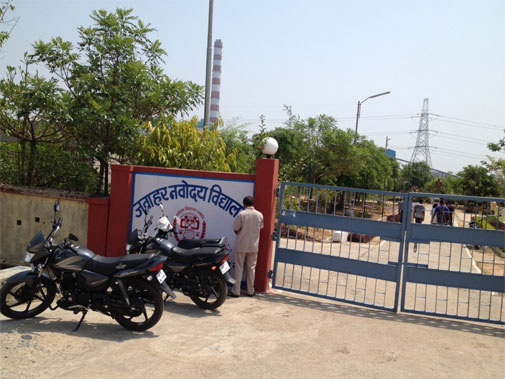 While rules say that a power plant should be at least one kilometre away from a school, this was not the case, journalists learnt. The presence of gigantic electrical transmission towers near the school playground was a clear encroachment of the school which it has not been able to avert. Two children had reportedly died in a ditch that was dug next to the boundary wall by power plant authorities. 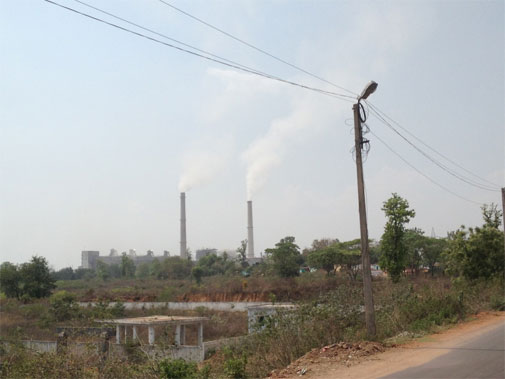 Many of Korba’s power plants are operating without the requisite “consent to operate” while none is fully compliant with the norms which are quite forgiving in the first place. The impact is visible and, well, devastating. Respiratory disorders have been reported by residents in large numbers due to the fly ash that even covers trees on a windless day. Korba has so far not figured in the list of cities whose air quality index will be monitored under the new initiative of the Government of India. The skyline of Korba is dotted with chimneys spewing visible and dense smoke. 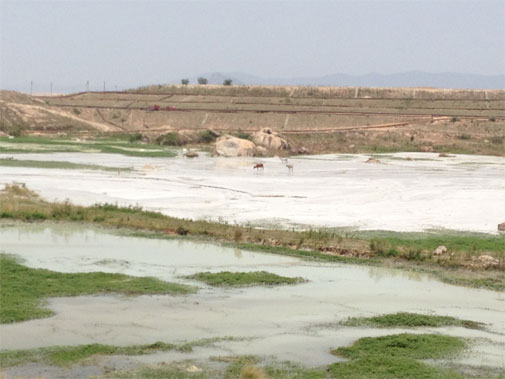 The visit to the polluted streams carrying fly ash came as a shock even though the tram was expecting to see what they did. A discussion with Korba’s journalists at the press club indicated a frustration due to very little change even though they had been reporting on pollution frequently. “We have been writing and reporting for such a long time but there is little action. Had it not been for the recent rain, you would have seen the leaves of this tree covered with white ash,” said Naushad Khan, president of Korba Press Club.

As the workshop concluded, we could perceive that most of the journalists went back with new ideas on how to report about the environment. “It was one of the best workshops I have ever attended,” said Chandrakant, whose disappointment and frustration was replaced by a sense of pride for being “the last man standing”. In a bid to help journalists make more impact, CSE now plans to amplify the voices of journalists reporting in the field.

The author was a key resource person from CSE at the workshop. He is also the author of The Brown Sahebs, a novel.

down to earth India
Donate Now