With only 57 per cent of normal rainfall recorded in India till now and less chance of rainfall improvement in this week, hope of monsoon revival in the first half of July gets shattered

With only 57 per cent of normal rainfall recorded in India till now and less chance of rainfall improvement in this week, hope of monsoon revival in the first half of July gets shattered 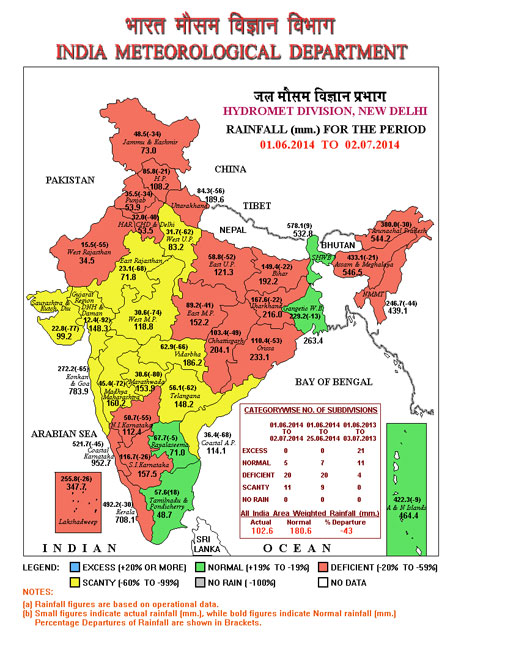 The largest shareholder of the rainfall in India, the South West Monsoon, made a guest appearance in north India last week by just marking its arrival. It brought smiles to the faces people as the maximum temperatures decreased due to the rains and cloudy weather. But soon sadness descended once again as the monsoon disappeared.

Maximum temperatures continue to rise once again in north India as Hissar in Haryana recorded a maximum of 41°C on Sunday, followed by Ludhiana (Punjab), Chandigarh, Karnal (Haryana) and Delhi (Safdarjung) at 37°C. Till date, the monsoon has covered about 20 per cent of Rajasthan; hence, high temperatures are prevailing in the state with Bikaner recording a maximum temperature of 41.2°C on Sunday and other places like Jaipur experiencing similar heat conditions.

Going against its tradition of progressing in India from southern direction to northern, the monsoon this year first advanced into states like Himachal Pradesh, Uttarakhand, Jammu and Kashmir, some parts of Punjab on July 2 and then moved southward to Delhi NCR; now it is progressing in the remaining parts of Rajasthan and Madhya Pradesh.

The lost memory of the monsoon seems to be back now as its busy progressing in those areas which it had missed before, like Bhopal,Madhya Pradesh (where it progressed on Sunday, July 6 evening). But it has not really revived in the true sense as the rainfall situation in India continues to be bad.

A mixed weather is expected in this week in India due to the vagary of the monsoon.

Rainfall with thunderstorms will be continuing in eastern and north-eastern states of India.

Rainfall will continue to be less in southern India due to which humid weather will prevail. Chennai will be witnessing maximum temperatures in the 38°C range, around 30°C in Bangalore, around 30°C in Hyderabad.

Monsoon showing no interest in Gujarat
The place most affected by rainfall deficit in India today is eastern Gujarat (including Daman-Diu and Dadra & Nagar Haveli). This region is witnessed an alarming 92 per cent less than normal rainfall between June 1 and July 6. Out of 188.5mm of rainfall expected (normal) in this area, only 15.2mm has been recorded, whereas the western half of Gujarat (Saurashtra and Kutch) received 81 per cent less than normal rainfall in the same period. As per IMD, monsoon has touched only the southern tip of the state (areas like Veraval and Surat) and more than 95 per cent of the state is still waiting for monsoon, which has challenged the state government led by its first woman chief minister, Anandiben Patel. Only 15 per cent sowing has been done till now in the state as against the 50 per cent last year. The officials are busy in estimating how much fodder and drinking water is available in northern Gujarat.

As the rains are expected to improve along the west coast of India in this week, a very slight increase in the rains is likely in southern and central Gujarat, especially from July 9-10. However, this will not reduce the rainfall deficiency and related problems will rise further.

Particularly on July 11 and 12, heavy rains can be expected in coastal Maharashtra, including Mumbai, which may lead to water logging in the city, and hence people must keep following the weather updates to see how the situation unfurls.

Sowing of cotton possible in central India this week
Vidarbha which has recorded 68 per cent less rains till now is likely to get rains from July 9 and 10, which should enable sowing of kharif crops (particularly cotton as it requires less water). But till it rains, hot weather and maximum temperatures in the 35-40°C range will be experienced. Rainfall worries for Marathwada will be continuing; the region has recorded 81 per cent rain deficit till now.