Sharad Pawar’s provision for protecting test data in the Pesticides Bill could spill over into trade agreements and hit the drugs industry, too 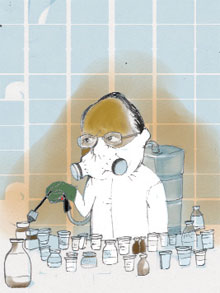 Why is the pharmaceutical industry taking such a keen interest in the Pesticides Management Bill, 2008, or PMB, which would appear to be as far removed from drugs as chalk from cheese? The Bill, pending in Parliament since 2008, is all set to be debated in the current session with agriculture minister Sharad Pawar having indicated an urgency to get it passed. The proposed regulation is intended to improve the quality of pesticides available to Indian farmers and introduce new, safe and efficacious pesticides.

So what do drug manufacturers have to do with such a law? Embedded in it is a critical section that provides three years of data exclusivity or protection for test data furnished by the original registrant of any new pesticide molecule that is being marketed in the country. Data exclusivity is a form of intellectual property right (IPR), usually related to medicines, and this is how it works. When a medicine is being marketed for the first time in any country, the pharmaceutical company has to obtain marketing approval from the drug regulatory authority. This approval is based on the test data related to efficacy and safety of the drug that is generated in clinical trials. Later, when the generic version of the drug comes up for marketing approval, the regulator relies on the test data submitted by the original registrant. In the normal course, that is. However, to keep generic competition out, originator companies are demanding data exclusivity that will prevent the drug regulators from relying on test data already in their possession for subsequent approval of generic versions of the medicine—or in this case, pesticides. In recent free trade agreements (FTAs) that have been signed with different countries, the US and the European Union (EU) have insisted on data exclusivity for varying periods on the ground that it is a World Trade Organization (WTO) requirement. But trade analysts have pointed out that this is a developed country interpretation; Article 39.3 of the international agreement on trade related aspects of IPR (TRIPS) merely refers to the need for data protection and does not mention exclusivity at all.

India came face to face with this question when it began negotiating the EU FTA. It would have acceded to the demand for data exclusivity had not patient rights groups and health activists across the globe begun a campaign against it, pointing out that data exclusivity would have put a clamp on the production of generic medicines for a variety of life-threatening diseases. After prevaricating for close to two years, the EU finally gave a public assurance that it would not be insisting on data exclusivity in its FTA. But here comes the rub.

The inclusion of such a provision in the Pesticides Bill signals a huge worry. Health campaigners point out that even if the EU negotiations have dropped the contentious data exclusivity, the fact that such a provision exists in an Indian law would have a ripple effect. The EU could then legitimately argue that there was no reason to keep out data exclusivity from its FTA or, indeed, from any of the other agreements that are in the making, including the one with the US. In other words, Sharad Pawar would be creating an Open Sesame to data exclusivity. This is a danger that the generics industry in India is acutely aware of. In recent months it has stepped up its lobbying, its latest attempt being a critique of a government report that in 2007 had argued for data exclusivity for agrochemicals.

The Indian Pharma ceutical Alliance, association of the country’s big generic companies, retraced the genesis of the Pesticides Bill to the Satwant Reddy report and exposed its flawed reasoning—yet again after the heat and dust it had kicked up four years ago.

The IPA-commissioned report has questioned the thrust of the Satwant Reddy report which justified the need for differential treatment for agrochemicals as compared to pharmaceuticals primarily on account of the higher costs and effort involved in generating test data. It says: “No data whatsoever is furnished estimating these costs and what period of data exclusivity would be justified in relation to these costs, except to assert that registration-related studies for agricultural chemicals are huge.”

In seeking to preempt data exclusivity for the agrochemicals sector, IPA has joined forces with the Pesticides Manufacturers and Formulators Association of India, just one of the many alliances opposing the Pesticides Bill. On the political front, the BJP and the Left are in concert, the former in particular taking an aggressive public stance on the proposed law. Its Kisan Morcha raises a pertinent point: why is the ministry of agriculture in charge of pesticides management when the world over it is the task of the environment ministry? The bigger question, though, is whether pesticides will spill over into pharmaceuticals.