Whether the revolutionary passion of his early verse, or the more mellow vision of his later work, Jnanpith award-winner Subhas Mukhopadhyay's poetry inspired an entire generation 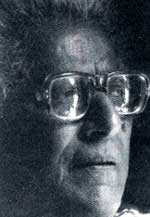 AFTER all these years, Subhas Mukhopadhyay must be used to taking awards in his stride. Long before prizes and awards came his way (starting with the Sahitya Akademi award that he won in 1964), those of us who knew Subhasda in the 1940s remember him as a soft-spoken communist poet.

Dressed in a kurta and pyjama, with a canvas bag slung across his shoulder, and a shock of dark hair (now grey), Subhasda was a familiar figure in every corner of Bengal, flitting from the CPI (Communist Party of India) office to the strike-hit industrial suburbs of Jagaddal; from the villages of Kakdwip (site of a massive peasant uprising) to the Calcutta office of the CPI newspaper, Swadhinata, (for which he wrote despatches). Out of these stirring experiences was born his poetry.

(My love, this is not the time to play with flowers; we are face to face with the threat of destruction. My eyes are no longer befuddled with the azure wine of dreams; my skin is baked by the scorching sun).

The poet then calls upon his love to listen to life-asserting music -- emerging from the factory siren and the songs sung by the hammer and the sickle! I am not sure whether Subhasda will be happy with my translation of this verse, composed when he was perhaps in his early 20s. He might dismiss the poem now as an impulsive expression of infantile revolutionary zeal. But for those of us who grew up with his poems, they still remain a part of our emotional and cultural existence.

We literally grew up with Subhasda's poems. I still remember, as a school kid in 1948, hanging on the words of his poem Agnikone (based on the revolts against the white colonial rulers in Burma, Malaya and Indo-China):
Agnikoner tallat jurey duranta jharey tolpar
kalapani,
Khun hoye jaye sada sada phena,
Ghumbhanga daloboddho dheuer
Khurodhar taloyare.

(All over Agnikone -- the southeast -- the seas are in turmoil, tossed by an irresistible storm. The white foam collapses under the sharp swords of the aroused waves.)

In the 1950s, Mukhopadhyay's new poems reflected the mellow mood of the decade with their gentle metre and wistful refrain, replacing the revolutionary march-beat of his earlier poetry.

Composed in the late 1950s, Phul Phutuk Na Phutuk, Aaj Basanta (Flowers or not, it is spring today) is a desperate urge to discover spring in a withered political desert and roll back the bitter memories of the war years and 1943, the year of the famine:

"The days that walked down the streets screening the lights with blinkers, and taking them off, laying down people on the laps of Death, and then carrying them away -- may they not return!"

Like many other sensitive intellectuals, Subhasda was outraged by the developments in the former Soviet Union and China during the 1970s and 1980s, and he gradually began to distance himself from communist politics. While I share his sense of disillusionment, I have found it somewhat baffling to discover a perceptive poet like Subhasda in the company of the philistines of the West Bengal Congress. Anyway, it is his choice! I am happy, though, to find that such company has not impaired his poetic vision. His latest poems reveal a stark, plain, speaking style, suitable for the trenchant wit that he employs in his sorties against unsavoury trends in contemporary politics and society.

The following lines from Dharmer Kal are a commentary on the grotesque world we live in:

The cows' bellowings are surrounding us like the tigers' howls,
The goats have mastered the hyenas' wild laughter.
Horses are giving birth to asses,
The beggar's bowl disgorges Mammon's wealth.
... ... ...
Those who don't know how to speak
Are delivering speeches.
Those who do not care to pay heed to sense,
Are listening.
Those who cannot even see,
Are writing on the walls.

---Sumanta Banerjee is a Delhi-based civil libertarian and columnist.