The joke's on the panchayat 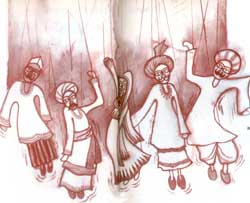 Any initiation of local democracy unmanacled of centralisation is always welcome: it provides a grab-as-grab-can opportunity for the chained to grab the ballot as a vehicle of expressing their desires.

The twist, however, is that the state wilfully distorts the popular demands from below, diverting and diluting the emerging challenge to its generally anti-people policies in terms of administration, resource use and development.

The recently-concluded panchayat elections in Madhya Pradesh, held between May 27 and June 17, was a grand success on decentralisation in principle but left cause for serious concern on the government's co-option of the process.

The elections were held under the provisions of the new Panchayati Raj Act, which provides for a 3-tier system: the gram panchayat (village council), the janpad panchayat (block committee) and the zilla parisad (district council). The Act itself does not give much administrative or judicial powers to the panchayats, but leaves it to the discretion of the state assemblies.

There is also provision for a state finance commission to decide on the devolution of finances to the panchayats, but once again its constitution and terms of reference are left to be decided by the legislature. The basic unit, the gram panchyat, has only a piddling advisory function and can only suggest changes in any programme which the executive is not duty bound to accept.
The secretariat at all levels is constituted by state or central government employees who, in the final analysis, are enslaved to the legislature and can refuse to comply with the instructions of the panchayats. Thus, despite the rhetoric, the panchayats are actually without any substantial powers. The only redeeming feature is the 30 per cent reservation for women at all levels.

These legal limitations to effective decentralisation are compounded by the realpolitiks of electoral exigencies. Ostensibly, the polls are held on a non-party basis. But, it is the 2 main parties, the Congress and the Bharatiya Janata Party, who decided on the candidates. In the indirect elections for the posts of president and vice-president of the janpad panchayats and the zilla parishads, there was a clear polarisation between the parties.

Poll violence claimed 15 lives. A newly-elected woman sarpanch was hacked to death immediately after the counting of votes in a village in the Jhabua district.

Despite all this viciousness, there is no gainsaying the fact that there has been a tremendously popular response to the elections, held a decade after many postponements. Government employees worked themselves to a frazzle to ensure that the massive exercise went through without a hitch. Even the High Court refused to entertain various petitions filed with it asking for stay orders, declaring that it was about time the elections finally went through.

There were more than a million candidates in the fray for about 2 lakh-odd posts. The turnout was not so good at 65 per cent, but the number of women who ventured out was encouraging. The complicated system of voting -- at one go for 4 posts -- meant that there was a pile-up of invalid votes. The campaigning for the posts of sarpanchs was the most intense because it is the only post with some clear-cut administrative and financial powers.

Theoretically, the 3-tier panchayat system should take over all developmental and administrative functions as the top bureaucrats at every level have been made secretaries to these councils and will take orders from them. However, there is political and bureaucratic opposition to this and attempts are being made to prevent legislation that vests too much power to the panchayats.

In fact, it has already been proposed to allocate Rs 20 lakhs to each constituency to be spent for development in accordance with the local MLA's wishes. Under these circumstances, the suspicion gains ground that the whole process is being used as a publicity stunt to make political capital without any genuine commitment to decentralisation.

The idealistic goal of decentralisation through the panchayats is unlikely to pay fruit. Instead, these bodies will be reduced to implementing projects with the paltry Jawahar Rozgar Yojna funds. The main chunk of development funds -- irrigation, public works, forestry and the District Rural Development Agency -- will remain outside the purview of the panchayats. What is going to happen is that a greater number of rural leaders will be co-opted into the system of corrupt politics.

Some aspects of the whole electoral process have been farcical, to say the least. The seats reserved for tribals were decided by a draw of lots. This resulted in having the posts of district presidents for Jhabua and Bastar being declared as non-tribal seats, although tribals constitute over 80 per cent of the population in these districts. The women's seats also became the centre of a lot of backdoor activity with affected rural leaders rushing to the district headquarters to get the reservations changed. The voters' lists were improvised at the last minute and many genuine people were deprived of their franchises as they were not given the opportunity to file objections.


The elections have also resulted in the breaking up of communities and sometimes even families, and in fanning old and new rivalries. The concentration of power in the hands of the sarpanch has delivered a death blow to the traditional consensus-based panchayat system and prompted every random person to try his luck. The chances of the sarpanches bypassing democratic procedures to get their work done, or of not getting the work done at all are extremely probable.

A feature that generated considerable interest was the 30 per cent reservation for women. Although this has brought large numbers of women into positions of power for the first time, the reality of their wherewithal belies expectations. In most cases, the women candidates are wives or daughters of former sarpanches or other male aspirants. In some cases, they did not even step out of their homes to campaign.

Gandhiji based his concept of gram swaraj on the traditional panchayat system which ran on a consensus-based democracy rather than on post-representative democracy. A major plank of this concept was that the village council should be in control of all administrative functions and over all the resources in the area. It would also decide what subjects it would leave for the higher units of administration.

However, the mainstream politicians flouted this system and adopted the by-now-inapplicable Westminster model. The unrest that is surfacing because of the rigidities of the prevailing system has forced the politicians to talk of devolving more powers to the people but without making any real changes.

So the contradiction of having to appear more democratic while not really handing over any artillery to the people has led to the charade of panchayat elections in several states. The elections in Madhya Pradesh were the latest edition.

Rahul is an activist associated with the Khedut Mazdoor Chetna Sanghat of Jhabua in Madhya Pradesh.