Uneducated villagers bring about a miracle 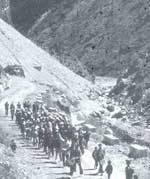 AS A PEOPLE'S movement, Chipko's achievements are well beyond the ordinary. Launched by a small organisation called the Dasholi Gram Samaj Mandal in the tiny village of Gopeshwar in the Garhwal region of Uttar Pradesh, Chipko exerted an immense impact on environmental movements throughout the world. This, despite Chipko's members being mostly simple, uneducated villagers.

Chipko's message was uncomplicated but difficult to implement: Cling to a tree to prevent it from being felled. To do so meant braving the sharp edge of the axe that had already felled many hectares of forest. Only when this message was widely accepted were the trees saved.

Chipko confronted other antagonisms. In the first it agitated against manufacturers of sports goods. Then it took on a forest contractor, the licence-granting Uttar Pradesh government and the state forest department. Chipko also attacked tree-felling for the region's largest temple -- Badrinath. For this they had to fight against the local cooperative society. Each Chipko campaign was fought with determination as the movement evolved from a minor group seeking forest conservation to a people's determination to tackle all malpractices in their region by involving the masses.

Chipko opposed a local cooperative society's tree-felling on behalf of the largest temple in the region -- Badrinath. Because of its timely intervention, alteration of the temple's architectural structure was prevented. Chipko also raised its voice against the overloading of pilgrims in buses plying on the route. Bus owners also stopped charging exorbitantly high rates.

Chipko has accomplished much, not only preserving forests but also regenerating them. It has succeeded significantly in explaining the need for all this and for local communities to have the right to decide their own environment protection measures.

Chipko influenced the administration and the people of India's largest state through its non-violent agitation. In doing so, it paved the way for other regions and nations to follow suit.