us President George W Bush has announced a climate meeting for the end of September. The announcement comes at a time when there is already a un-led initiative to hammer out an agreement on emission targets after the expiry of Kyoto Protocol, and must been seen as another instance of the us side-stepping multilateral negotiations.

The un Framework Convention on Climate Change (unfccc) has decided on a meet in Bali, Indonesia, in December this year, to discuss measures to be adopted after 2012--when the Kyoto Protocol lapses. A series of meets have been planned as a run-up to the Bali conference. One of them is slated for September 24.The meet called by the us president is close on the heels of this unfccc meet it is slated for September 27-28 (will be over by the time this issue gets printed). The guest list for the us meet includes developed countries and a category of nations described as 'major economies'. 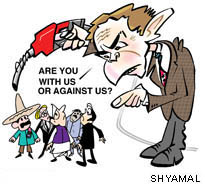 Which are these 'major economies'? The category includes countries such as Brazil, South Africa, Indonesia, Mexico, India and China. These countries have been excluded from climate obligations under Kyoto. The us opposes this omission, and the new meet is obviously a move to make them fall in line. The developing countries should refuse to fall into this trap.

The Newsweek -- normally an instrument of American foreign policy -- recently revealed that the us isattempting to introduce sophisticated new impediments in reducing the use of fossil fuels. The desperation of this patriotic American weekly only shows the worrying extent to which the climate belligerence of us has grown, despite appeals by a large segment of the population, eminent climate scientists, some individual states and even a section of the industry (we can perhaps forgive this weekly now for alerting us to an impending spectre of 'global cooling' in a 1975 issue). Even the Hollywood which sells the world the most unsustainable life style has joined the climate chorus. And now the us wants to put the rest of the world, the developing countries in particular, on a reactive gear, and that is what they are aiming through the conference.

The new meet is also against the G-8 June 2007 Summit decision to "actively participate in the un Climate Change Conference in December in Indonesia with a view to achieving a post-2012 agreement.". It may be recalled that Bush had insisted at this meeting on incorporating India and China in the successor agreement to Kyoto Protocol.
While refusing to accept mandatory reduction targets, India should embark on its own domestic programmes to reduce increasing pollution from fossil fuel use. The reckless expansion of the automobile and aviation industry in particular should be brought under environmental checks. India should reform itself to find genuine justification for not submitting to mandatory reductions. The argument that India's development space should be expanded to remove poverty in the country is a travesty of the ground truth. The expansion of the country's pollution estate benefits an elite minority, while the poor pay the cost as victims of floods, droughts, diseases and other forms of disasters. It is only fitting that India's carbon exemption is linked to the achievement of the millennium development goals in, and beyond, the country. And since such a linkage will not come about voluntarily, pressure from the international civil society on this count would be welcome.

But participation in the us conference would tantamount to denying the spirit of the Kyoto Protocol and a complicity in undermining the multilateral forums and processes.