Who foots the huge dole for business? 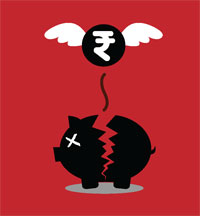 There are some things you simply do not do in the liberalised economy. You do not put bank loans under the lens—unless these are ballooning out of control. That is, until such loans are likely to jeopardise the entire banking system and send the economy into a tailspin. And there’s another thing: you don’t talk of bad debts of government-owned banks to business in the same breath as food subsidies to the poor.

It’s like comparing apples with oranges, as one editor explained early into my stint with the business media. Here’s his logic: bank credit to industry is for productive purposes and it creates assets and employment, whereas food subsidies and the likes are water down the drain. The latter does not help the economy or the beneficiaries who only get accustomed to doles. It becomes a bad habit and that’s why the subsidy burden in India is becoming bigger and more unsustainable with each passing year. Besides, banks are in the business of risk, and in the process of giving loans it is only natural that some loans would go bad. It’s a philosophy that finds ready acceptance and is faithfully reflected in the pink press.

But of late, reports of the increasing pile-up of non-performing assets (NPAs) of banks have begun to appear with regularity, underscoring the nervousness of both the regulator and the government. NPAs are the umbrella term for risky loans on which interest is overdue for more than six months. So, as returns on more and more advances dry up, banks are forced to reclassify their assets and make provision for these sticky loans.

What is causing the sudden panic? Reckless credit expansion coupled with poor risk assessment that has pushed up NPAs to scary levels. According to the latest figures, NPAs of the 40 listed banks at the end of December 2013 had touched Rs 2,43,000 crore. That is, in the nine months of the current financial year they had added Rs 63,386 crore, or 35.2 per cent, to their NPAs. Now hold your breath, over 86 per cent of these gross NPAs are accounted for by public sector banks (PSBs)!

Private and foreign banks, on the other hand, have been more careful. They have brought down the level of their stressed loans to tolerable levels, while those of PSBs have zoomed in recent years although their loan share has remained almost at the same level.

Here’s the other thing. Everyone knows the banking system is skewed in favour of big capital. While small borrowers like you and me would have been hounded for even the smallest slip-up in repayment of loans of, say Rs 1-10 lakh, PSBs have been throwing money at defaulting big borrowers with reckless abandon. Take the case of Vijay Mallya, promoter of the now grounded Kingfisher Airlines. Although the airline was clearly going down the tubes, banks were easily persuaded to provide a fresh tranche of loans to the feckless entrepreneur and are now saddled with debts of over Rs 7,000 crore. It’s a write-off since there are not enough assets pledged to recover the loans. But Mallya, who has got himself into the Rajya Sabha for a second term, continues his extravagant lifestyle and was recently splurging on his private cricket team, the Royal Challengers Bangalore, while his employees have been denied wages.

This is probably what prompted Finance Minister Palaniappan Chidambaram to say “we cannot have an affluent promoter and a sick company.” He admits that it is the big borrowers, with loans of over Rs 1 crore, who are defaulting. But nothing flourishes like crony capitalism in India and the PSBs are unlikely to be free of the political-business nexus. And it’s not just Mallya. Both houses of Parliament are packed with big capital money as, increasingly, are state legislatures. A range of interests from mining to textiles and chit funds find representation here.

While there is a desperate attempt to ascribe the mounting NPAs to the slowdown in the economy, this excuse will not wash. In a recent working paper, the banking regulator clearly ascribes the parlous finances of government-owned banks to factors ranging from “inadequate appraisal and monitoring of credit proposals to aggressive lending”.

So let’s commit a heresy. Post Chidambaram’s interim budget it appears the total subsidy on fuel, food and fertilisers will go up only marginally to Rs 2,46,397 crore in 2014-15 against Rs 2,45,452 crore in the revised estimates for this fiscal. The food subsidy in the wake of the Food Security Act goes up by Rs 23,000 crore to Rs 1,15,000 crore. The pink press calls it a whopping increase. No such term was used for the Rs 2,43,000 crore NPAs.