Why people want to be poor 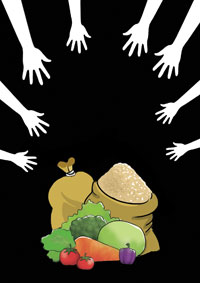 The unprecedented surge in below-poverty-line (BPL) families in Chhattisgarh has a lesson for India’s public distribution system (PDS). In its overdrive to implement its own food security law, the state has issued more ration cards than the total number of households. Political parties see it as a scandal, while it may be more than a simple case of fudging cards to access cheap foodgrains. The crisis has some fundamental messages for the country about to implement the National Food Security Act.

Chhattisgarh passed its food security law in December 2012, which provides for near-universal coverage of cheap foodgrains. A few months before this year’s general elections were declared, the state government embarked on a campaign to distribute ration cards in the second half of 2013. While the state has 5.6 million households, the government issued more than seven million ration cards. This also saw a rise in the number of BPL households in the state—within a month, BPL households doubled from 3.3 million in August 2013 to nearly 6.58 million in September. When the news made headlines, the government made over 1.4 million ration cards ineligible—the exact difference between the number of households and ration card holders.

Why was there such a surge in ration card registration? The law defines household as a family that has a common kitchen. Each household gets 35 kg of rice at Rs 2 per kg every month under PDS. Many joint families in Chhattisgarh gave a self-declaration that they were individual households with separate kitchen. This was easy to show—brothers in a family got a separate gas connection to show separate kitchens. Thus, overnight, a household turned into multiple households under the same roof.

Why would somebody do this? This is where the debate over who is eligible for cheap foodgrains and how it should be delivered comes into play. The price difference between PDS and open market foodgrains is huge. Everybody loves cheap food, particularly when food inflation is high.

Then there is the problem of inequality. For example, a joint family of 10 persons having a common kitchen will get 35 kg of foodgrains every month, so will a family comprising three or four members. While the quantity may suffice the latter, it is not enough for a large household, which suffers the most. At the same time, people prefer to avail food under PDS as prices are low and the law makes it an entitlement. So a joint family notionally splits to avail more foodgrains. This is not to suggest that there were no fraudulent cards taken by ineligible people. The big difference between the price of public and open market foodgrains makes it a lucrative commodity for black market.

The message from Chhattisgarh is critical as we expect a robust PDS to roll out the National Food Security Act. It is evident that making PDS universal may not render it corruption-free, as is evident from Chhattisgarh. In fact, we focus too much on corruption leaving aside other issues of importance. Inequality in a highly subsidised food system is going to be a much bigger challenge than the delivery mechanism. Similarly, the price difference will boost the black market. The problem will only get bigger. The lessons from Chhattisgarh must be institutionalised to ensure that the National Food Security Act does not derail before it starts.