To cull or not 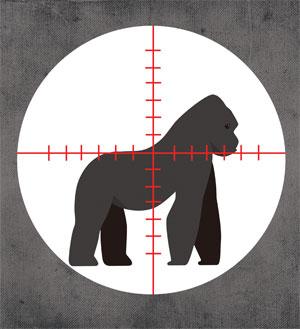 Zoo officials at the Cincinnati Zoo gunned down Harambe, a towering 17-year-old 200 kg gorilla, last month after a three-year-old boy fell into its enclosure by accident. The video went viral soon after, triggering a frenetic war of words on whether it was necessary to kill the great ape to save the child.

In their defence, zoo authorities argued that Harambe was exhibiting aggressive behaviour and could have potentially hurt the child. As a first recourse, the officials did try, albeit in vain, to distract him by way of treats. It was when they saw him dragging the child up a ladder that they decided to go for the gun. The video does show Harambe dragging the child by his ankles through the water in the moat in a manner most would judge as rough.

But can we unambiguously infer that Harambe posed a threat to the child’s life? Terry Maple, an expert in animals’ psychological responses to captivity, told National Geographic that he thought it was normal gorilla behaviour—gorillas are known to play with their offspring in a similar fashion. So it’s likely, he opined, that he was being protective rather than offensive. He, however, believes that shooting him was the right, albeit a painful, decision. Most primatologists have seconded Maple’s view.

It’s clear that the decision to kill Harambe was a moral decision in the face of ambiguity over the interpretation of his behaviour. The ambiguity arises mainly because apes are our closest cousins— they share 98 per cent of their genes with humans—and we do know that they are capable, or are at least perceived to be, of sentience, intelligence, and compassion. In fact, in a similar incident in 1996 at the Chicago Zoo, a female gorilla rescued a three-year-old boy who had fallen unconscious into her enclosure. Can we imagine people reacting with similar outrage if the beast in question was an alligator, or a tiger, or a viper? Apparently not, for we are far less uncertain about their likely behaviour.

The hullabaloo over Harambe’s killing raises deeper conundrums about our moral relationship with animals. For instance, while we cry hoarse about the suffering of majestic species like the big cats, the great apes and elephants, we tend to overlook the plight of thousands of “lowly” species teetering on the verge of extinction. The recent massacre of 200 nilgai (an antelope) in Bihar exemplifies our ambivalent attitude to different animal species. A movement called compassionate conservation is gaining ground, whose two articles of faith are “first do no harm” and “lives of all individuals matter”.

Another glaring absurdity in our outlook is that we continue to breed wild animals in captivity and put them in zoos for fun and, ostensibly, edification, even as we continue to destroy their natural habitats. According to the IUCN Red List of Threatened Species, all species of wild apes are endangered or critically endangered. There is no hard evidence that zoos have inspired humans to make a difference to the blighted lives of other species. The pathetic state of Indian zoos and what they have to offer to the visitors affirms this impression—36 deer perished in the Delhi zoo this summer.

Evolutionary biologist Marc Bekoff believes that Harambe’s death should be seen a clarion call “to move away from captive breeding and the zoo mentality of keeping animals locked in cages for our entertainment—and supposedly for their own and their species’ good”.

But abolishing zoos means the world will have to preserve more of critical habitats to hold back the sixth extinction, mostly human-made. In his latest book, Half Earth, the Harvard evolutionary biologist E O Wilson wants half the planet turned into natural reserves. But with over six billion people aspiring for a modern lifestyle, how will we reconcile their material desires with the precarious lives of our less fortunate fellow earthlings? That’s the zillion dollar existential dilemma.