An analysis of Brazil’s last three elections suggests that peopleÃ”Ã‡Ãªdo vote for parties for such initiatives, but only when these are backed by structural changes to ensure their continuity

An analysis of Brazil’s last three elections suggests that peopleÃ”Ã‡Ãªdo vote for parties for such initiatives, but only when these are backed by structural changes to ensure their continuity 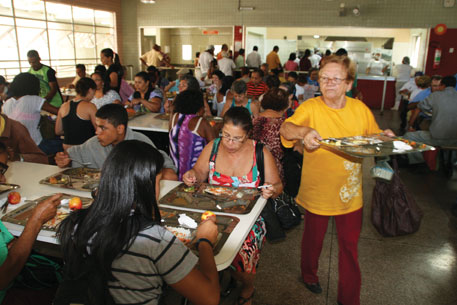 During the nine-hour-long debate over the National Food Security Bill in Lok Sabha on August 26, K V Thomas, the minister in charge of consumer affairs, food and public distribution, used a phrase, “zero hunger”. It may have been an expression of his subconscious thought on Brazil’s much famed poverty eradication programme with the same name. And it is not without reason. More than the appeal of the programme in Brazil, the ruling party members are aware of its rich electoral dividends. Those who are tracking the United Progressive Alliance (UPA) government’s social programmes, like the right to food and direct benefit transfer, know that it is a strategic adoption of the Brazilian model. Will UPA reap its dividends like its counterpart in Brazil did? The answer is both “yes” and “no”.

Luis Inacio Lula da Silva launched the Zero Hunger initiative when he became Brazil’s president in 2003. The programme is credited for the country’s unprecedented reduction of poverty in the last decade. In fact, in 2010, it met its millennium development goal on poverty reduction, five years before the deadline.

Zero Hunger is an umbrella programme that includes many components like school food and extensive conditional cash transfer (CCT) programmes. They are similar to India’s mid-day meal programme and the expansive Integrated Child Development Scheme. But unlike in India, the programme was accepted wholeheartedly in Brazil.

There are many studies that have quantified the electoral benefits of the Zero Hunger programme in Brazil. Lula’s re-election in 2006 is credited to the success of the programme. In January this year, the American Journal of Political Science carried an analysis of cash transfer programmes in Brazil and their impact on the last three elections, during 2002-2010, coinciding with the beginning of the Zero Hunger programme. The analysis of the elections’ results shows that such programmes do result in more votes, but their electoral utility diminishes in the longer run.

The study found that an increase of $100 in yearly per capita coverage of the programme led to as much as a 15 percentage point increase in the vote share in 2002, but the figure fell to 6.5 percentage points in 2010. In fact, Lula’s party got more votes in areas that had relatively more coverage of the programme than in areas with no or negligible coverage. Such has been the programme’s electoral quotient that by the 2010 elections all parties and presidential candidates pledged to expand it. The study says that this is why in the 2010 elections the voters did not vote on the basis of the programme as they were sure about its continuity. “CCTs have influenced the Brazilian elections since before these policies first caught observers’ attention and in periods of poor and good economic performance alike. But more importantly, although CCTs have helped incumbents, there is no evidence as of yet that they can radically reshape the political landscape,” says the analysis.

UPA has enlarged the outreach of its two latest schemes, the direct benefit transfer programme and the food security law, to 70 per cent of the country’s areas. Going by the above analysis, UPA should get some electoral benefits in the short term. The above analysis also points out that people look for continuity of such entitlements. The ruling party has to ensure that the programmes will survive through political changes. In the case of Brazil, Lula ensured this. First, in 2006, he enacted the Food Security and Nutrition Law. This was fortified in 2010 when the right to food was made a fundamental right in Brazil’s constitution. He enacted laws that ensured procurement from local sources for the massive food programme. This helped small farmers who, in turn, voted for him.

UPA has crossed the 2006 landmark of Lula, i.e. enacting a food security law. But our problems of a leaky public distribution system and lack of a robust beneficiary identification mechanism persist. People may not get to see a fundamental change in their access to foodgrain just from a whimsical decision to make access to food a right. In the first term of UPA, the rural employment guarantee programme had three years to show results.