The recent strike reflects how the workers’ bargaining power has been crushed, and the impotence of the Left to lead them

The recent strike reflects how the workers’ bargaining power has been crushed, and the impotence of the Left to lead them 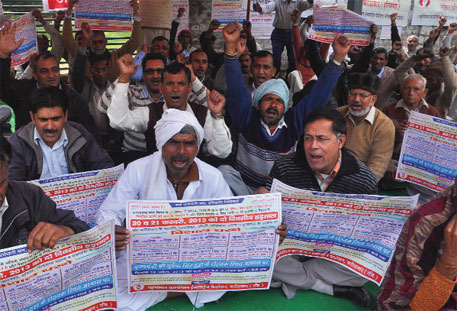 Last week’s strike by workers across the nation was instructive in many ways. It was illustrative of the decline of trade unions and the decimation of labour unity, the hostility of the new middle class and the mainstream media to wage struggles. But most striking of all was the alienation of the main Left parties from their main constituents—the working class.

Let’s look at how the media covered the two-day strike. This was the first time in three decades that trade unions cutting across political lines had come together to mark their unhappiness with a range of government policies, particularly inflationary price rises that have made it difficult for the lower classes to get a living wage. Workers of the 11 central unions— such unions need membership of 400,000 to be recognised—and 5,000 unaffiliated unions, it was announced would go on strike in support of their demands. General secretary of the All India Trade Union Congress, Gurudas Dasgupta, told the press that trade unions representing the Left, Right and Centrist parties have been forced to come together because the new economic policies unveiled since 1991, the year that liberalisation was ushered in, had undermined the interests of workers. The strike was first announced in September 2012 and repeated attempts were made to engage the government. In February, the concerns were raised again at the annual Indian Labour Conference attended by Prime Minister Manmohan Singh. But neither he nor Labour Minister Mallikarjun Kharge responded. At the last minute, Singh called the union leaders to a meeting with his senior ministers—a meeting which was pointless because the ministers came with no offer.

What were the unions demanding? Primarily, they wanted the statutory minimum wage to be fixed at Rs 10,000, removing the ceiling on bonus, provident fund, increasing the quantum of gratuity and pension for all. They also wanted strict enforcement of basic labour laws without any exception and stringent punitive measures for violation; a universal social security cover for unorganised sector workers and creation of a National Social Security Fund. By no stretch of imagination could these be deemed excessive or unreasonable. Yet the impending strike was reported with barely concealed annoyance and anger by media which clearly showed its corporate affiliations. One point repeatedly raised by industry and given much play by the media was the loss to the economy, a figure initially put at Rs 20,000 crore and quickly scaled up to Rs 26,000 crore. Then there was the question of violence. All those brought to TV studios for the debate from industry lobbyists to the well-to-do software professionals—they also claimed to be aam admi—were unanimous in condemning the violence, but refused to acknowledge the fact that it was a union leader’s murder that had triggered the violence in the first place.

The self-absorption and insularity of India’s new middle class is well-known and it is not surprising that issues of industrial democracy and workers’ rights are far removed from their ken. But that’s no reason why the media should pretend that these issues no longer matter. India has the largest number of working people anywhere, barring China, and it is reflective of our times that this mass of humanity is overlooked, or becomes invisible to the political class, too. The main Left parties, CPM and CPI, sadly can in no way become the saviour of labour. In any case their unions, for decades, represented only the organised workers of the country who accounted for a paltry three per cent of the workforce. Sadly this preoccupation with the organised industrial workers also led to the ossification of the workers’ movement. And although CPI’s Dasgupta may say worker power was crushed after the economic liberalisation policies of the 1990s, the trade unions had lost the battle a decade earlier. It was in the 1980s, and in the top industrial states of Gujarat and Maharashtra, that employers won wide-ranging control of the labour market. Was the textile strike the turning point? Perhaps. But the decades since then have witnessed the decimation and saffronisation of the workers’ struggle with governments of every hue and ideology aiding the process through threats and inducements.

Does India need trade unions? Certainly, because of the millions who do not have decent wages and basic benefits. Unionisation is primarily about people organising to help themselves because governments are not doing so. What we need is a movement that understands workers and puts them first instead of the rigidly aligned political groupings that do not even speak to each other. The mainstream Left has failed our workers. A new movement—and ideally it should arrive from within the ranks of the workers themselves—cannot afford to do that.