Home |
Classroom
| 200 years of groping in the dark

200 years of groping in the dark

...and latest findings have 2 groups of mutually hostile astronomers still going cockeyed trying to gauge the age of the universe 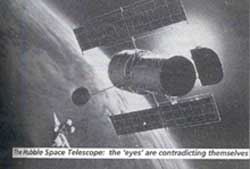 THE universe was born in 4004 BC -- so proclaimed the 18th century English Bishop James Ussher. But that was theology. The following century saw scientists "trespassing" into divine territory and challenging Biblical truths, notably the universe's birthday. The debate spilled over into this century. Only, now theologians don't figure in it.

Astronomers lord, so to say, over this esoteric territory. Over the past half century, they have chosen to be divided into 2 opposing camps, one favouring a geriatric universe as old as Methuselah and the other a younger Adonis bursting with vigour. Every once in a while, "fresh" evidence surfaces making either Methuselah older or Adonis younger.

The ambiguities are so stark that there is no occasion for celebratory consensus. The latest evidence from the Hubble Space Telescope (HST) puts the universe's age at between 8 and 12 billion years, but only 2 years ago the same perfect "eyes" had reported looking at a universe nearly twice as old -- about 20 billion years.

The Hubble constant, which marks the present rate of expansion of the universe, is one of the epicentres of the controversy. The universe is expanding; and a distant galaxy recedes from us faster than a nearby one; the Hubble constant expresses just how much faster.

The H0 has a direct bearing on the age of the universe: the faster the universe is expanding, the less time it must have taken to reach its present size since the Big Bang, and so the younger it must be. A high value -- about 70 -- suggests that the universe is younger than its oldest stars -- a beauty of a contradiction that, if established beyond doubt, would put paid to the Big Bang theory -- the bedrock of modern cosmology.

The Hubble constant was first measured in 1929 by American astronomer Edwin Hubble, although mathematical errors gave him a preposterous figure of 500. By the '60s, most scientists had reconciled to a figure of 50, but a battle of sorts later broke out when Gerard de Vaucouleurs of the University of Texas in Austin dared to pipe up and say it was 100.

Protagonists of an older universe now find that the H0 value lies as often in the upper 30s and 40s as in the 50s. The youth gangs favour a value in the 80s. In the past 6 years, astronomers using new techniques have bolstered the Adonisians.

In principle, the H0 can be determined simply by comparing a galaxy's red shift -- the oberved lengthening of the red colour emitted by an object, similar to the increase in the loudness of a sound as you approach its source -- with its distance. The farther away a galaxy is, the smaller the H0. Unfortunately, while measuring red shifts is easy, determining distances to galaxies is not.

Further, the galaxies must be distant enough to be part of the so-called "Hubble flow" caused by the expansion of the universe; otherwise, the gravity in our galaxy and that of its neighbours disturbs the observed motions. Most of the galaxies whose distances are agreed upon lie within 10 million light years of the Earth, whereas galaxies in the Hubble flow are much farther away -- which is why astronomers are having to devise new ways of measuring the distances of these galaxies.

The most popular distance indicator to these remote galaxies are bright, pulsating yellow stars called Cepheids. Discovered some 200 years ago, these cosmic curiosities have long attracted the attention of astronomers seeking the size and age of the universe.

Classified as yellow supergiants and of the same colour and temperature as our Sun, the Cepheids' intense brightness and distinctive variation allows them to be picked out in galaxies other than our own. But Cepheids do not exist in all galaxies. To become a Cepheid, a star must have several times the Sun's mass. These heavy stars die soon after they are born, so only a galaxy that gives birth to new stars has Ceheids.

Astronomers prefer Cepheids to other cosmic yardsticks for several reasons. The relation between a Cepheid's period (the frequency with which it emits light) and its intrinsic brightness is clearly defined. The Cepheid's distance can be calculated by comparing this with its apparent brightness as seen from the Earth.

Cepheids are also stable and offer a better option compared to another distance-indicator: exploding stars called supernovae. But these are one-off events, offering no second chance to repeat observations with improved techniques.

Astronomers have used Cepheids to reliably measure distances to several galaxies. But there is a problem: They are not far enough not be affected by the gravity of surrounding galaxies. The effect is strong enough to cause the galaxies to move toward us rather than away.

Astronomers' had banked on a galaxy called the Virgo Cluster in helping them calculate the H0 because it is far enough to probe the universe's expansion. Until recently, however, no Cepheids could be seen in the Virgo cluster -- it is so distant that its Cepheids blend in with other stars. But now, using new techniques, astronomers have succeeded in getting a fairly accurate estimate of distances to edge-of-the-universe galaxies such as as the Virgo. These methods all give a high value for the Hubble constant of around 80-85, implying it's Adonis out there.

Methuselah's acolytes put more weight on another method based on "Type 1a" supernovae. All Type 1a supernovae arise from exactly the same kind of star -- a white dwarf -- so they should all have the same intrinsic brightness. If this intrinsic brightness were known, these objects would be excellent indicators of distance. Moreover, supernovae outshine entire galaxies and so can be seen far beyond the perimeter to where Cepheids can be detected. Unfortunately, no Type 1a supernova has recently exploded in a galaxy with a Cepheid.

Just how young is the universe depends on how densely it is packed with matter, a property called Omega. The gravitational pull of the universe's mass retards its expansion. The critical density of the universe is when Omega has a value of 1, at which the universe is stable. It will keep expanding if the value is less than 1 -- but if it is more than 1, the universe will have so much mass that it will some day stop expanding and start collapsing into itself.

But herein lies the paradox. It means that the universe is younger than the estimated ages of globular star clusters of the elderly stars in our and other galaxies, which are thought to be roughly 15 billion years old. How can we have stars older than the universe itself, of which they are only a part?


There seem to be 4 ways out of this mess. The 1st is that estimates of the ages of globular clusters could be wrong. These estimates are based on standard theories of stellar structure and evolution, which have other flaws. For example, they predict that the Sun emits 3 times as many neutrinos as it actually does.

A 2nd possibility is that estimates of the H0 are wrong: that it really is 50 or 60 and that the universe is some 15 billion years old. This becomes less likely as astronomers increasingly find higher values of H0.

The 3rd option is the introduction of a "fudge factor" called the cosmological constant, an anti-gravity deux ex machina of Einstein's creation. The great German physicist called it his greatest blunder ever. If the H0 and Omega give an age of 10 billion years, for instance, one could invoke a Cosmological Constant to say that the universe is actually 5 billion years older than it looks. Few astronomers have resorted to this decelerating device. Yet some others might opt for the 4th and most radical option and go by ancient Hindu philosophical canons that the universe had no beginning and will have no end. In other words, the Big Bang never happened and scientists have been wasting their time over the past 2 centuries.

Though unsettlingly accurate, the latest evidence of a younger universe is certainly not the last word on this controversy. Given the history of this debate, it would be naive to actually mull it over and wait for a flash of inspiration. American satirist Mark Twain said it all: "The researches of many commentators have already thrown much darkness on this subject and it is probable that, if they continue, we shall soon know nothing about it." 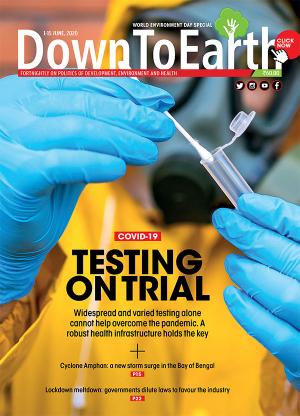