A star spender with clipped wings

The ambitious Indian space programme, despite occasional setbacks, has had its share of success. A backgrounder to the programme which is very much in the news today 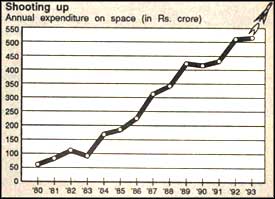 The Indian space programme has come of age with the flawless blast-off of the Augmented Satellite Launch Vehicle (ASLV) in May 1992, after two successive miscarriages in 1987 and 1988. The rocket successfully placed the 106-kg Stretched Rohini Satellite Series-C (SROSS-C) into a 450-km orbit.

For good measure, it also rejuvenated the Indian space scientists' confidence, which had received a jolt when the US imposed a two-year technology embargo on the Indian Space Research Organisation (ISRO) for entering into the cryoengine rocket deal with a Russian firm. The US believes that the deal is a breach of the Missile Technology Control Regime (MTCR).

The 1990-2000 profile of the Indian space programme is a very ambitious one which aims "to transform India into an advanced nation by 2001, and fully exploit the potential of space technology for the socioeconomic development of the country".

Some of the salient features of the programme include launching of 17 satellites and 13 rockets, developing a mobile satellite communications system for land, air and maritime use, and developing GRAMSAT, a satellite system for broadcasting development-oriented programmes to India's villages.

As satellite payloads increase in the future, developing launch vehicles for boosting these satellites would present an enormously challenging task for Indian space scientists. The recently launched ASLV is the latest in the series of indigenously built rockets. It has the capacity to put a 150-kg satellite into a 450-km low-earth orbit. The next rocket in the pipeline is the Polar Satellite Launch Vehicle (PSLV), to be launched in 1993, which is designed to place 1,000-kg remote sensing satellites into a 900-km polar orbit. If all goes well, the PSLV will evolve into the Geosynchronous Satellite Launch Vehicle (GSLV), capable of carrying 2.5-tonne communications satellites into an orbit of 36,000 km.

However, recent developments have cast doubts on whether these goals can be met. If the deal with Russia falls through, India will have to postpone the GSLV launch, scheduled for 1995-96, by at least 10 years, which implies that several future communications satellites will require foreign launchers.

In the 1980s, the number of failures was high (See table) but these failures were not limited to Indian-made satellites or launch vehicles. Two foreign-produced satellites also failed. In any case, since the mid-1980s, the Indian space programme has been attempting some extremely ambitious missions, and failures are inevitable.

India's problem is funds. The budget for the space programme is already about one-sixth of the Central government's total investments on science and technology. The rate of increase in the 1980s was a significant 40 per cent per annum. The Economist has listed India as one of the star spenders on space. And the costs are still growing. While Aryabhata, Bhaskara and APPLE cost about Rs 10 crore to Rs 20 crore, the latest remote sensing satellites cost around Rs 100 crore, and the indigenous communications satellites about Rs 200 crore. Can India sustain or increase this expenditure in the future?

The launch vehicle projects are very expensive in rupee terms, says Y S Rajan, an adviser in the ministry of science and technology who has also been with ISRO, but they will save on precious foreign exchange. Satellite projects, on the other hand, feed voraciously on scarce foreign exchange, especially for components. Components are India's weak point, nowfurther weakened by the US embargo. The problem was brought out clearly in a statement in the national paper of India for the second UN Conference on Exploration of Peaceful Uses of Outer Space in 1991: "There is one area in which the country has not been able to make a significant headway. This relates to the manufacture of electronic components and devices needed for use in space. So far import has been the only way out."

The space programme was the brainchild of physicist Vikram Sarabhai who had, in Prime Minister Jawaharlal Nehru, a powerful ally who was convinced of the prudence of wedding science with development. Faced with criticism for wasting meagre resources on space while the nation was yet to rid itself of poverty, disease and illiteracy, Sarabhai replied that "it was not a question of whether a developing country like India could afford to go in for space technology, but whether it could afford not to."

The 1960s were a competence-building phase with an emphasis on programmes relating to satellite communications and remote sensing of earth resources. However, the programme also envisaged becoming self-reliant in means crucial to these applications, namely, satellite and launch vehicle technologies.

In May 1972, the Space Commission (SC) and the Department of Space were formed under the chairpersonship of Satish Dhawan. The most important event of the decade was the launch of India's first satellite, Aryabhata, on April 19, 1975. An equally important milestone was the success of the second developmental flight of the indigenous Satellite Launch Vehicle-3 (SLV-3), India's first breakthrough in the field of rockets.

In 1979, India launched its second satellite, Bhaskara I, aboard a Soviet launch vehicle. Further, two major experiments on satellite applications for broadcasting and telecommunications -- the Satellite Instructional Television Experiment (SITE) and the Satellite Telecommunications Experimental Project (STEP), respectively -- were carried out successfully during 1975-79.

SITE, the first major space application programme, consisted of transmitting programmes for the benefit of rural communities, using a US satellite. About 2,400 villages participated in the experiment. STEP, on the other hand, was a joint telecommunications experiment between ISRO and the Post and Telegraph department (P&T) utilising the Franco-German Symphonie satellite. The experience proved immensely useful for the future INSAT system. During this period, remote sensing applications experiments were carried out using data acquired from aircraft-borne sensors and the US LANDSAT satellite.

The decade, however, went down as the decade of the INSAT-I series. The INSAT system, established in 1983, revolutionised communications in the country. These multipurpose satellites, built by the Americans, catered to long-distance communications, meteorological observations and nationwide direct satellite TV and radio broadcasting. It also enabled communications to remote areas and cyclone prediction.

With two earth observational satellites, Bhaskara I and II, in orbit, the National Natural Resources Management System (NNRMS) was set up in 1984 to carry out various applications of remote sensing. The launch of IRS-IA in 1988 and that of IRS-1B in 1991 have contributed immensely to the activities of NNRMS. The IRS-IC, IRS-ID and IRS-IE satellites are scheduled for launch by the end of the century.

There are many applications of remote sensing -- mapping of land and forest cover, drought monitoring, prospecting for groundwater sources, estimation of areas under different crops and their yields, and forewarning of disasters such as floods and cyclones. One example merits special mention. After a long and nationwide debate on the rate of deforestation in India during the 1970s, it was satellite pictures that revealed, much to the embarrassment of the forest department, that it was a whopping 1.3 million ha a year. Since then, the country's forest cover is being monitored every two to three years using satellite pictures.

Indian satellites have also been used for scientific experiments. For instance, the SROSS-C satellite, recently launched atop the ASLV, will investigate the special features of the low attitude ionosphere and monitor celestial gamma rays to understand solar activity.

However, major communications, television and meteorology are still done with foreign-procured satellites. This will continue till the mid-1990s by which time we plan to develop the indigenous INSAT-II series. In the field of remote sensing, however, India has achieved self-reliance, thus joining a select band of nations possessing the technology.

The Indian space programme, which has done fairly well so far, is at the crossroads now. "Given a creative outlook," believes one space scientist, "it is possible for the Indian space programme to adapt itself to the new technological, commercial, and geopolitical realities. But the transition may need a difficult process of reconstruction. Therefore, it is essential that a new strategy for space be enunciated soon."