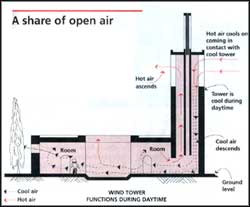 WEATHER and climate exercise tremendous influence over human wellbeing and health. Humans make dwellings for themselves to escape the vagaries of climatic variations. Sitting in the relative comfort of our airconclitioned offices and homes - between a past in which electricity was unimaginable and a future in which it probably will be unaffordable - we are forced to ask whether the price that we are willing to pay for our modern lifestyles is too high.

Living well beyond our means today, we have, with total unconcern, relegated our problems of energy to the back- ground. It is time we realised that as humans, it is our responsibility to put a stop to the exploitation of the irreplenishable - whether energy, environment, flora and fauna, or archeological sites. Conservation is the watchword today.

The '70s oil crisis forced the international community to think seriously of conserving energy. According to calculations, the building industry was the major consumer of energy; almost Ii3rd of the total energy consumed in the us was used for heating and cooling the country's buildings, leading to the rediscovery of the sun, wind, water and biomass as natural methods of controlling temperature. The term "solar passive architecture" was coined during this period. However, traditional systems cannot compare favourably with modern airconditioners. As their limitations became apparent, people lost interest and architects dismissed them as being "too expensive". The high cost of energy came to be accepted as another inevitability of day-to-day existence.

Undoubtedly, our requirements today are greater than what our foreparents needed 100 years ago. Compared to airtonditioners, solar passive architecture is expensive and ineffective in most climates. On the other hand, it can help reduce the load on an airconditioning system by over 25 per cent. Every region in the world offers excellent examples of naturally cooled or heated buildings, be it the igloos of the Eskimos, or the Mesa Verde native American settlerent in Colorado, USA.

Humans, when confronted with extreme climates, have usually exploited any one of the 4 factors which affect their thermal comfort - the movement of air, temperature, relative humidity and radiation. For example, prevailing wind and breezes are utilised in a dry climate. By properly orienting and locating a building, the Hot air cools on coming in wind can be directed into it using contact with windcatchers and windtowers, which cool tower have been the subjects of much experimentation recently.

The exchange of heat between a bullding and the air surrounding it Tower is depends, among other things, on the cool during velocity of the air; the greater the speed of air, the greater will be the 'heet exchange. Consequently, to rernove heat from a building, the pencool air etration of wind should be facilitated. descends It has been observed that the quality of the surfaces over which a wind blows before coming in contact with the building affects its temperature. Ground Evaporation cools a hot wind when it level is passing over a water basin.

Traditional buildings paid con siderable attention to the pretreat ment of ventilated air. The use of wet grass mats for filtering air was common practice (as in the Diwan-i-Khas in Red Fort, Pancha Mahal in Fatehpur Sikri and Deegh Palace near Bharatpur). Some traditional buildings in Iran, particularly in the deserts, make use of interesting devices and concepts. In addition to thick mud walls, which stabilise interior tempera tures to an intermediate value between day and night levels, and the construction of buildings close to each other to reduce exposure to the sun and heat losses at night, Iranians use baud geers, or windtowers.

A windtower is made of a large chimney vertically slit in its upper part by several brick baffles. At night, the tower cools, thus cooling the air coming in contact with it, which becomes heavier and descends to the interior of the tower and the building. On windy ddys, the process is accelerated. The air enters through the tower, descends and passes through the building, and exits from the doors that face the central hall and the basement. The pressure created by the cool air pushes the hot air out of the building.


Heat absorbed by the tower during the day is transmitted to the air at night, creating an ascending current when there is need for further cooling. This current can be employed"to suck fresh air into the building. On a windy night, the air flows down the side of the tower which is exposed to the wind and is warmed by the contact with the masonry, while an upward current is generated in the leeward section of the tower. By appropriately opening or closing various sections of the tower and/or of the building, different portions of the building can be cooled as and when required.

The earth can be used as a source or a sink for heat, for heat exchanger system utilises the earth's stable temperature and large thermal capacity. The air that is passed through the pipe ground level is cooled in summer in winter. The amount of heat between the air and the tunne depends on factors such as the lenj of the tunnel, the material of the air velocity, etc.

Some energy-conscious India have used the concept of the win, Delhi Energy Development Agen designed by Rayal Designers, use tunnel system. Here, a 500 mm-dh windtower fixed with 50 m long, connects the a blower to a 300 mm-diameter ring pipe; the connecting pipes enter the rooms below sill level. Being a relatively new concept, data on its performance is not available.

However, windtowers and windtunnels only assist in lowering the air temperature, without affecting the water vapour content of the air. Water, which helps in evaporative cooling, increases the cumulative effect of the system. When cool air comes in contact with water, some water is evaporated, thus lowering the temperature of the air and increasing its water vapour content. A windtunnel system that cools air evaporatively as well is particularly effective.

An Iranian windtower needs to be surrounded closely by buildings to ensure that the wind does not turn around and escape through the tower. Also, it works only with individual units. The windtunnel system is free from these limitations, although the accumulation of dust and the difficulty of protection from driving rain create problems. The additional advantage is that the system works during powercuts.

The Irani ;ans also use windtowers for keeping rainwater fresh in underground roofed tanks, covered by vaults at ground level. In order to keep the water fresh, custom designed windtowers are built around the tank to carry air down to the surface of the water. The system utilises the seasonal variations of the desert area and the insulating characteristics of the ground, iwhich maintain a constant temperature throughout the year. External heat does not penetrate the lower levels of the reservoir, and large Amounts of water remain cool during the torrid summers.

The concept of the windt6wer had been found to be so -feasible in Iran that each house ;equhnce was equipped with one, iouses had several. However, modcts, trained in Western planning ave contributed to the disintegravhole pattern. Technology needs to refully in specific environments; to use an imported technology has mistaking the means for the goal.

Skyscrapers as well as steel-and-glass struc[nctionality because of climatic factors such as sands is sand, dust and winds, which tter with altitude, and the lack of ditional architecture like stone ial gardens and semi-underground ith natural ventilation through not only provide thermal insulaprotection against sand and dust, but tion and also help to generate air currents that moderate temperature. Cylindrical roofs, vaults and domes diminish the surface area exposed to the sun and help control temperatures. Even though the most primitive solution is not always the best, one must not abandon the wisdom bequeathed by tradition at the drop of a hat.

---Ratish Nanda is member of the Conservation Society of Delhi.