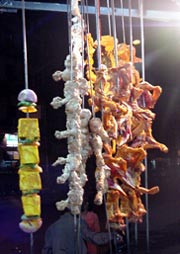 the European Union's authority for applying precautionary principle in environmental and health decision-making has been recently reinforced by two rulings of the European Court of Justice. Both cases arose from a 1999 regulation banning use of four antibiotics in animal feed. Two pharmaceutical firms had challenged the regulation arguing that it was based on an attempt to achieve 'zero risk' and not a thorough assessment. But the court dismissed this argument saying that the regulation was justified keeping in view health hazards posed by bacteria becoming resistant to antibiotics as a result of rampant drug use in animal feed.

Most of us know that antibiotic overuse in hospitals has led to many bacteria becoming resistant to these magical cures. But a silent and more widespread cause of the problem is their excessive use in cattle and poultry industries. Through meat and dairy products, bacteria over-exposed to antibiotics enter the foodchain, making humans resistant to these drugs.

The poultry and dairy industries mainly use antibiotics to prevent and cure bacterial diseases, and as growth promoters. According to Washington dc-based us Animal Health Institute, more than nine million kilotonnes of antibiotics are injected in us farm animals every year to treat or prevent diseases. Massachusettes-based Union of Concerned Scientists further elucidates that out of this nine million, as little as 0.9 million kilogrammes is used for treating sick animals, whereas the rest is spent on disease prevention.

Such rampant and unnecessary use of antibiotics has resulted in numerous antibiotic-resistant bacteria. In 1992, a study of Escherichia coli bacteria isolates from human and animal population of north India found that a high frequency of multi-resistant strains was prevalent in both human (37.7 per cent) and animal (25.5 per cent) bacterial populations. During another study conducted in Tamil Nadu on antibiotic-resistant Vibrio cholerae bacteria, scientists found that bacterial strains isolated from environmental and seafood samples had high resistance to commonly used antibiotics such as oxytetracyclin, streptomycin and tetracyclin.
Years of adapting to hostile environment have primed human pathogens to change rapidly. They achieve this by manipulating their own genes, incorporating resistant genes of other organisms and then dividing rapidly to ensure that a large number of resistant copies are produced in a short time. Antibiotics, which are used to kill them, represent one such factor that galvanizes the pathogens to change rapidly.

Among all human pathogens, bacteria tend to become most resistant to antibiotics because of their physiology. Since they are unicellular, bacteria have smaller number of genes compared to multicellular organisms. Therefore, even the slightest of changes in their genetic system resulting from exposure to antibiotics alters their pathogenic characteristic. Spontaneous mutations have been known to induce resistance in the tuberculosis bacterium.

Moreover, since they reproduce rapidly, an entirely new 'type' of antibiotic-resistant bacteria species can evolve from one mutated individual in a very short time. Bacteria also exchange resistant genes during sexual reproduction. This happened in the case of Neisseria gonorrhoeae bacterium becoming resistant to penicillin. The bacteria also have small circles of dna called plasmids that can move from one bacterium to another even during casual contact. Shigella bacterium that causes diarrhoea has become resistant to four antibiotics due to this.

Even more alarming is the fact that poultry animals like chicken can produce antibiotic-resistant bacteria rapidly. In the mid-1970s, scientists from Massachusetts-based Tufts University found that when chicken were fed with tetracycline-mixed fodder, they began excreting tetracycline-resistant E coli bacteria within 24 to 36 hours.

Resistant-bacteria can enter human foodchain through various ways. For example, eggs of antibiotic-fed hens carry antibiotic-resistant bacteria Salmonella enteritidis due to which humans suffer from salmonellosis -- a disease resulting in fever, abdominal cramps and diarrhoea. S enteritidis infects the ovaries of hens and contaminates the eggs before the shells are formed. Eggs can also become contaminated after contact with S enteritidis-infected chicken excreta through cracks in their shell. Egg-associated salmonellosis is becoming a major problem in the us and several European countries.

Farm effluents are another means by which humans become exposed to antibiotics and antibiotic-resistant bacteria. Regardless of how and where the animals are fed, the drugs often find their way to surface and underground channels of water. Inappropriate disposal of animal waste also contaminates water. According to us Environment Protection Agency, 80 per cent of antibiotics administered orally to animals end up in bacteria-rich dumping sites, from where they enter water sources.


Experts say that such environmental contamination can be easily avoided by controlling factors that adversely affect animal health. They assert that use of antibiotics is the easiest and cheapest way to maintain animal health, and a ban on antibiotic use is not likely to raise the prices of animal products. This was recently proved during a trial carried out by Germany's Bavarian Board for Animal Husbandry that was aimed at finding out the economic viability of antibiotic usage. During the trial, 400,000 pigs were fed with growth promoters and another 400,000 were given feed without including the drugs. It was found that one kilogramme of pork produced without growth promoters was only about us $0.05023 more expensive as compared to that produced by pigs that were fed growth promoters.

International trade debate centred on uncontaminated animal products has ruffled a few feathers now. On March 10, 2002, Russia imposed an embargo on the import of poultry products from the us, as multidrug resistant salmonella bacteria were found in them. However, in developing countries like India, antibiotic use in farms is a neglected issue. Indian diary industry, for example, lacks a system for monitoring maximum residue level of antibiotics in milk. What makes it worse is that only about 10 per cent of the total milk produced in India is processed in the organised sector. The rest skips all quality control measures. "No rules and regulations have been laid down to monitor antibiotic content in milk or any other food product," reveals R V Sudershan, technical research officer at the National Institute for Nutrition, Hyderabad.

Furthermore, most farmers use antibiotics without consulting veterinarians. Ironically, T Bandhhopadyay of Gujarat-based National Dairy Development Board (nddb) proclaims that the situation in India does not warrant any monitoring system. Even more callous is the attitude of V S R Shastri, assistant general manager, National Egg Coordination Committee (necc), Pune. "The amount of antibiotics used in the industry is not our concern. These drugs ensure that local farmers get a fair deal in the egg business," he says. Some even use the 'poor' economic status of our country as an explanation for not being concerned. "Being a poor country has its advantages. When humans themselves can't afford treatment, how can they afford antibiotics for animals?" questions D K Singh, an official working with the quality testing department of nddb.

According to researchers, what is needed in India is a national food monitoring system. Without such a system the extent of antibiotics abuse would never be known, and without facts and figures, no organisation can provide any feedback to the farms. Another way out of the quandary is the use of traditional knowledge. "There are 6,000 traditional medicines in India which are more effective than antibiotics in healing animals. They should be promoted," says A K Gupta, professor of agriculture at Indian Institute of Management, Ahemadabad.