Exotic denizens of the particle zoo

From ancient Greece to the world of today, humans have always believed that the amazing diversity of objects in the universe can be interpreted as different combinations of a few, basic particles. 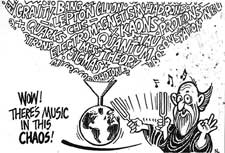 CAN WE unravel the composition of all objects -- both living and non-living -- as just an interplay of a handful of particles? Since time immemorial, humans have tried to make sense of their complex world by assuming a fundamental, underlying simplicity of structure.

Until around 1950, scientists believed atoms were made of just three types of particles -- electrons, protons and neutrons. Most microscopic phenomena could be explained in terms of the interactions between these elementary particles, using well-established rules of quantum physics.

In the late 1950s, however, this theory was shattered by the discovery of many more subatomic particles and physicists are now trying to find order in this virtual zoo of particles.

But before one tries to unravel the order inherent in this seeming anarchy, it is important to know how these particles interact with each other. Once again, interactions in nature, like the number of particles, possess an amazing diversity. But science now accepts that all phenomena we know of, can be accounted for by four fundamental forces of nature -- gravitational, electromagnetic, weak and strong.

The gravitational force is well-known: It is responsible for apples falling on one's head and the moon orbiting the earth.

Gravity makes the apple fall and the moon go around, but it is electromagnetism that is responsible for our existence, in the sense that it underlies all chemical and biological processes. Electromagnetism is the force that exists between charged bodies and its effect is to be seen in all sorts of household appliances, from electric fans to home computers.

The other two fundamental forces -- weak and strong -- are unfamiliar to us because they operate only in the submicroscopic world. The weak force is responsible for the phenomenon of radioactivity -- the spontaneous disintegration of atomic nuclei, resulting in the emission of penetrating particles. The strong force is what keeps the atoms of our body from disintegrating by binding together the protons, which possess a positive charge and so experience electric repulsion, and neutrons, which are without any charge, in the atomic nucleus. The strong force is more powerful than the electromagnetic force.
Discovering the order that might exist in the mysterious, subatomic world, would require, first, the classification of particles according to their properties, much like the classification of animals into families on the basis of shared characteristics.

A particle's most important characteristics are its mass, electric charge, spin and interactions. The mass of a subatomic particle is so minuscule by ordinary standards, it is measured in units called electron volts. One can get an idea of how small this unit is from the following: the mass of an electron is about 500 kilo electron volts and the mass of a small one-gram twig would be about a trillion-trillion-billion-electron volts!

The electric charge of a particle is usually measured in terms of the electron charge that is considered the fundamental unit of charge.

Particle spin -- not ordinarily familiar -- is inherently a quantum mechanical quantity that can be thought of as a kind of rotation. The spin comes in multiples of a fundamental unit, or quantum. All particles in nature have either integral spin, in which case they are called bosons (after Indian physicist S N Bose), or half-integral spin, like the electron, in which case they are called fermions (after Nobel laureate American physicist Enrico Fermi).

Apart from these, the kind of interaction between particles also serves to classify them.


Of the four types of interactions or forces, the force of gravity is experienced by all particles. But on the microscopic level, this force is so small that it can be considered insignificant (See table). Again, all charged particles feel the electromagnetic force, so this is not particularly helpful in characterising the particles. This leaves the weak and the strong force, both of which play important roles in the submicroscopic world and can help classify subatomic particles. The particles that feel only the weak force are called leptons (light ones), while those that feel only the strong force are called hadrons (bulky ones).

The electron, the oldest elementary particle known, belongs to the lepton group, which also includes the electron neutrino, a mysterious and elusive particle that is without both mass and charge. Therefore, it experiences only the weak force, which makes it very penetrating and extremely difficult to detect. A neutrino could easily pass right through the earth without having a single interaction. The electron and its neutrino apart, the other members of the lepton group are the muon and the tau lepton, each with its associated neutrino.

Unlike leptons of which there are few, hadrons number in the hundreds. Among these are the well-known proton and neutron and those more exotically named, such as kaons, sigmas and chis. What sense can one make out of this plethora of particles? Is there some substructure in all these particles? Is there another level of elementary particles whose combinations yield this tremendous variety of hadrons?

The quark theory The answer to these questions is contained in the quark theory proposed by physicists Murray Gell-Mann and G Zweig in 1963, which assumes that the basic building blocks of hadrons are quarks. Quarks are of six types, are fractionally charged (in terms of the electron charge) and possess an additional property that is arbitrarily called colour by physicists, though it has nothing to do with the familiar visual characteristic of objects. The colour of a quark, like electric charge in case of electromagnetism, is what makes quarks experience the strong force that binds them together to form hadrons. The vast variety of known hadrons can all be built as combinations of these six types of quarks!

Can we account for all known particles with the help of leptons and quarks? Well, not quite, because there are other particles that do not fall in either of these two categories. These particles are called vector bosons and their existence is required by the modern quantum theories of interactions. Bosons act as mediators between other particles experiencing any of the four types of forces. For instance, the mediator of electromagnetism is a particle called the photon. The electric attraction of a proton and an electron comes about through an exchange of a photon between them. Similarly, there are vector bosons for the other three forces.

If we ignore some of the more speculative ideas in physics, then what is left is: With six leptons and six quarks (and their interactions mediated through the carrier vector bosons) the apparent chaos in the physical world gives way to an elegant and beautiful order. It is a remarkable achievement of the human intellect to be able to understand the multifarious structures in the universe in terms of these few elementary particles. But bigger and more powerful particle accelerators could result in the discovery of a structure even in these elementary particles. Or, the diversity of interactions could be understood in terms of a single unified interaction, thus, truly having unity in diversity.