Home |
Classroom
| Explaining the chemistry of an oil spill

Explaining the chemistry of an oil spill

Oil tanker spills compound the danger to the marine food chain by crude released into the sea in normal operations and seepage from the earth. Steps are now being taken to reduce the threat. The International Maritime Organisation is taking the initiative in monitoring 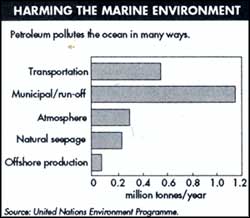 NO SOONER had the Shetland Islands oil spill been brought under control, reports came in of oil tankers running aground off Indonesia and the Nicobar islands. And it was not all that long ago, that oil wells were wrecked as a weapon of war during the fighting in the Gulf.

With huge tankers knifing their way through the high seas and offshore oil drilling intensifying, oil pollution is an ever-present threat. But more than all the oil accidents put together, the danger is greatest from the estimated 770 million gallons released annually into the oceans from normal tanker operations and from city waste and runoff. Add to this another 62 million gallons from natural spills seeping up from the earth.

Crude oil is a mixture of such compounds as the light but poisonous benzene and toluene, both of which evaporate quickly, and heavier, sticky tars. Upto two-thirds of an oil-spill can evaporate in the first few days, but before the light, toxic compounds evaporate, they kill fish and animal life and pose harm to future generations. The thick oil also washes ashore creating reservoirs on the beaches of toxic chemicals that can have a lasting effect on the environment.

The rest of the floating oil breaks up into globules, which is whipped by the wind into a brown, foamy "chocolate mousse". Oil spilled by the Exxon Valdez off Alaska remained a thick, waxy mat for days because the sea was extremely cold. Warm waters and sunshine help to break down the oil more quickly enabling bacteria to biodegrade it naturally.

The immediate impact of an oil slick is the mass death of fish and turtles and of birds because they cannot fly with wings coated by heavy oil. Because the oil forms a film on the surface, it reduces the amount of light and oxygen passing into the water. This suffocates marine life or causes it to go into a state of "heat coma".

The oil destabilises the entire marine food chain, beginning with plankton, microscopic organisms that live in ocean depths, being deprived of the sunlight they need to make food. The death of plankton means death for marine animals that feed on them and so on up the food chain to humans.

Toxic chemicals leached from the oil and some of the oil itself sink to the seabed, damaging coral reefs and endangering the fish. In oil spilled during the Gulf war, suspended oil-tar balls threatened to wreck desalination plants. And oil spilled by the Braer off the Shetlands was blown ashore by high winds, harming the islanders by polluting the atmosphere.

The volume of oil shipped annually since 1985 has doubled and stands at 1.5 billion tonnes now, but Fearnleys, a Norwegian shipping expert firm, reports accidental oil spills is on the decline. Following the 119,000-tonne oil spill when the Torrey Canyon ran aground off the west coast of England in 1967, it was agreed marine pollution could be tackled only at an international level and the International Maritime Organisation (IMO) was chosen to coordinate efforts worldwide.

In 1973, the IMO adopted the International Convention for the Prevention of Pollution from Ships (MARPOL). After the Exxon Valdez oil spill, in 1989, 90 countries under the auspices of the IMO drew up an emergency system to deal with spills. Called the International Convention on Oil Pollution Preparedness, Response and Cooperation 1990, it details the steps to be taken to clean up slicks and requires ships to prepare pollution emergency plans. It limits oil company liability to US $80 million, though cleaning up the Exxon Valdez spill cost more than $2 billion. However, the 1990 convention provides for a special fund to be set up from contributions from shipping companies.

Finally, the IMO ruled that by July 1993, all tankers must have double hulls for additional safety and all single-hulled ships must be phased out by 1995. A Shell Petroleum report contends that 20 per cent of the world's oil fleet is suitable only for "the scrapyard".


Various methods are employed to blunt the destructive power of oil spills and to clean them up. These methods have been refined and are a far cry from bombing the wreck of the Torrey Canyon to burn the oil in its holds. Oil can be broken up by using chemical dispersants or contained and removed by using booms and surface skimming methods.

In the conventional mechanical method, air-filled floats called booms that descend upto 1.5 metres below the surface, are used to encircle the slick while it is still offshore. Then the oil is scooped using skimmers, which are either vacuuming devices or oil-absorbent ropes that are drawn through the slick. These oil mops are made of oleophilic or oil-absorbing synthetic fibres woven into a close mesh, which are drawn through the oil and then squeezed between rollers, so that some of this crude can be salvaged as kerosene.

Disc skimmers consist of a number of oleophilic aluminium alloy plates to which oil adheres when the discs are rotated in the water. The weir skimmer sucks oil using a hydraulic pump mounted on floats.

Using these boom and skimmer methods allows spilled oil to be removed at the rate of 25-50 tonnes per hour. These techniques work best early during a spill, before the oil begins to separate. Booms are also useful when the oil has to be contained before it can damage coastal flora and fauna. However, a boom method is not foolproof because the oil can form tar balls that sink and flow under the booms.

The key component of chemical dispersants is the surface active agent or surfactant, a part of whose molecular structure has an affinity for oil and the other part, for water. The two main types of dispersants in use today are the conventional or hydrocarbon-based solvents, which contain 15-25 per cent surfactant. Aerial spraying is the most efficient way of applying dispersants.

Although modern dispersants are much less toxic, their use still evokes controversy. When oil from the Braer was sprayed by chemical dispersants, there was an outcry that the toxic chemicals could be just as harmful as the oil to plant, animal and human life. Some argued using dispersants deliberately introduces additional pollutants into the sea, increasing hydrocarbon in it. However, dispersants are quickly diluted in open seas and there are fewer chances of adverse biological impact. There is greater concern when dispersants are used in shallow coastal waters, although controlled application is possible.

Dispersants may be used on the beach only after the gross pollution has been removed, care taken to prevent the penetration of dispersants into beach material and marine life protected against prolonged exposure to dispersants. Chemical dispersants are effective only if applied immediately after the spill, as most crude oil at sea rapidly becomes untreatable by dispersants. Dispersants are of no use when the oil forms viscous emulsions such as a mousse. Hence, in deciding whether to use chemical dispersants, the risk of environmental damage by the toxic chemicals has to be weighed against the possible effects of untreated oil.

Some unusual methods were employed to clean up oil during the Gulf war. New Zealand wool, which can soak upto 40 times its own weight, was encased in mesh booms to absorb the oil. Biotechnology has resulted in the creation of oil-eating bacteria that can digest two-thirds of oil hydrocarbons at amazing speeds. With the hydrocarbon thus removed, oil slicks become lighter and sink to the ocean bed.

Ultimately, nature cleans itself. Bacteria and microorganisms that degrade oil are ubiquitous. These bacteria break the oil into carbon dioxide and water. Some will evaporate (moving the pollution from water to air), and the rest will disperse, getting diluted in the sea. Most shorelines of marshes, mud flats and mangroves are environmentally sensitive and should be left alone for nature to clean up through strong wave action, unless the need for removal of the oil is immediate.