The road from Stockholm to Rio

It was the Stockholm conference, held exactly 20 years ago, which put environmental issues on the global agenda for the first time. But the contours of environmental negotiapons have changed a great deal from those early days 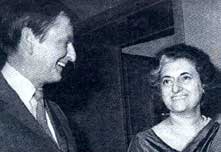 It was Sweden which had first proposed the idea of a UN Conference on the Human Environment (UNCHE) in 1968. Acid rain, coupled with global consequences of the fall-out from nuclear tests in the 1950s, had brought home the message that humanity had "only one earth". Thousands of young people across the inclustrialised world were already fighting their governments against the establishment of nuclear power stations. As news broke of one deadly inci4nt after another, some feared that water and air pollutiolh was getting out of hand.

Rachel Carson's book, Silent Spring, which had come out in 1962, had been a significant event. It had aroused widespread public apprehension about the new chemicals used in agriculture. Sea-faring celebrities like Thor Heyerdahl and Joan Jacques Cousteau had reported dying and polluted oceans. And the population explosion had raised fears that the world would soon run short of food and natural resources.

One book that captured world attention immediateiv before the Stockholm conference was Limits to Growth Donella and Dennis Meadows. Coming from a highly technocratic institution like the Massachusetts Institute of Technology, and using detailed computer models, the book had impressed many with its depiction of an industrial world hurtling towards collapse - running out of clear air. clean water, minerals and other natural resources. All these concerns finally landed on the shores of Stockholm.
As in Rio, Stockholm also witnessed a division between inclustrialised and developing countries. The latter emerged as a powerful group of nations in the Stockholm conference - a fact which got further consolidated through the Group of 77 in various UN Conferences on So Trade and Development (UNCTAD).

"The inclustrialised nations," says I K Gujral, who attended the conference as India's urban housing minister ter, "were basically worried about air and water pollution, while developing nations hoped for assistance to wipe out their sordid poverty without needless damage to ecosystems." The environmental concerns of the North were viewed by many developing countries as "luxury problems".

In the pre-Stockholm phase, there was a proposal put forth by some industrialised countries that natural resources should be placed The Stockholm under the administration of world trust to be shared by all the conference saw humanity. Developing countries vehemently opposed this idea developing They argued that the industrialised countries' proposal countries emerge share the natural resources of other nations, without offering 1 as a distinct group share the economic power that they exercised over the international community in return, was inadmissible.

Before Stockholm began a panel of experts on environmental and' development had met in Swiss town of Founex. T statement, called the Fou Report, had sharply revealed divergence of opinion between industrialised and de e countries. For the former, development was the cause of environmental problems. For the latter, it would be the vehicle for correcting social and environmental imbalances.

The Stockholm confer 1"1W finally resulted in an acknowledgement by the international community of the link between environment and development and also of the greater responsibility of industrialised countries regarding the contamination of the planet.

India's Prime Minister Indira Gandhi, in an unfortunate choice of words, called "poverty the biggest polluter", by which she really meant that the Third worlds environmental problems are simply a reflection of its poverty.

Olaf Palme, the Swedish Prime Minister, the conference that his government attached "the greatest importance to the need for development". He found it "an inescapable fact that each individual in the industries alised countries draws, on the average, 30 times more heavily on the limited resources of the earth than his counterpart in the developing countries."

Stockholm's Plan of Action covered many important issues such as human settlements, natural resource conservation, land, sea, and air pollution and education. nvever, there were some notable omissions, to the uth's annoyance, like population, poverty, desertifica- in, and real action to protect opical forests (interestingly, the insistence of Brazil, iich had raised the issue of vereignty over a country's tural resources). But the conference did give rise-to the UN environment Programme NEP), which finally came to based in Nairobi.

An interesting highlight of P conference was Palme's refence to the Vietnam War, without naming it, and his criticism of a nation that was deliberately destroying another nation's environment. But no nation picked up the of environment and till Indira Gandhi, the only Prime Minister to attend conference, also referred to Vietnam war.

The success of the Stockholm conference led to a a of UN-sponsored megaconferences in the 1970s and early mos. These conferences followed a predictable pattern governments repeatedly voted in favour of resolutions international action, but signally failed to implement orn. For instance, despite the high-sounding speeches the 1976 HABITAT Conference, few governments elaborated realistic strategies for confronting the urban settlements crisis.

By the early 1980s, the megaconferences had lost it momentum. People had become sceptical of their alts, which rarely justified the expenditure and effort I went into organising them.

B B Vohra, a retired civil servant who was a member the India preparatory committee to the Stockholm lierence, believes that these conferences were soon hwed to mere junkets for politicians, bureaucrats and Vs.-Part of the reason for the failure of these conference ." feels Anupam Mishra of the Gandhi Peace iodation, "is that while new programmes were cobbled to the agendas of UN agencies, most remained brfunded or had untrained staff."


But in the meantime, the environmental movement continueded to grow worldwide. The dramatic oil price hikes 973 and 1979 forced industrialised countries to irtake energy efficiency programmes. With environmental problems growing in developing countries, an environtal movement began to grow in these countries. The 1973 Chipko Movement nurtured a new ental awareness in India. When NGOs met in Nairobi in 1982 to discuss the decade since Stockholm, they did not display the same faith in development as their governments did.

"This development has neither given us the gains of development (reduction of poverty or unemployment) it given us environment," argued several Third World speakers present there. "We want an alternative form of development."

The idea of alternative development was crudely consolidated into the concept of "sustainable development" by thekWorld Commission on Environment and Development, also known as the Brundtland Commission. Even while the Brundtland Commission was preparing its report, the worl-d,yas shocked by disasters such as the Bhopal gas tragedy, the massive Sahelian drought, and the Ch6fhobyl nuclear disaster. In addition, there was growing consensus among scientists on global threats to the ozone layer and to the climate. The 1980s also saw the politicisation of environmental issues. New ecology-oriented parties sprang up in several countries like France, Australia and Germany.

In 1988, the UN General Assembly adopted a resolution calling for a UN Conference on Environment and Development (UNCED) in 1992, which amounted to a return to the days of megaconferences.

While many issues in Rio have remained the same as in Stockholm - for example, the fear of developing countries that environmental issues could be used in an interventionist manner - there are many others that are not. The need to prevent global environmental disasters like ozone layer depletion and climate change was never so urgent.

The biggest change pyobably lies in the popularity that the environmental movement has achieved. More than a 100 heads of state attended the Rio summit as against only a handful in Stockholm. But while Stockholm was marked by the presence of such towering intellectuals as Margaret-Mead, Gunnar Myrdal, Hannes Alfven, Barbara Ward and Barry Commoner, Rio was marked more by the presence of Jane Fonda, CNN's owner Ted Turner, Glivia Newton John, Roger Moore, Shirley Maclaine, ang the soccer idol, Pele.

Only time will tell whether this is a sign of a movement having become more pop or more serious.
UN Rio Summit Air Pollution Water Pollution Developing Countries Environment DTE CLASSROOM Classroom
SUPPORT US