The science of cloning is in the nascent stage 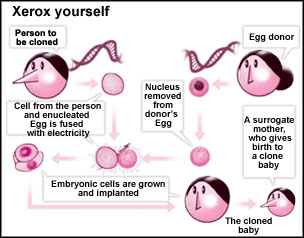 bored with the humdrum life of the office? Time to take some action, but Michael Keaton should not be your rolemodel. In the famous movie, Multiplicity, Keaton made his clone do all the dirty work, while he had the time of his life. However, the fun did not last too long, with the clone turning out to be even smarter and Keaton losing his identity. The film is a perfect example of how cloning, despite having numerous advantages, is a serious proposition. Rather, a dangerous one. With the recent announcement of a human baby being cloned, the issue has become all the more controversial.

The cloning of a mammal remained a subject of science fiction movies and novels till February 1997, when Iam Wilmut and colleagues from Roslin Institute in Edinburgh, the uk, announced the birth of Dolly -- the first cloned mammal (see 'Third twin?...not yet'). Since Dolly, scientists around the world have succeeded in cloning around 150 sheep, cattle, pigs and monkeys in total.

But what is cloning? It is nothing but a process which helps produce a genetically identical organism through non-sexual means. It can also be used to make a precise genetic copy of a dna sequence, a cell or a tissue. It is done by taking out the nucleus (large dense part of the cell containing the genetic material) of a living cell, and then putting it into an egg whose nucleus has been removed. The egg is then fertilised by means of electrification. The resulting embryo is thereafter planted into a womb (see diagram: Xerox yourself). The newborn, be it a sheep, pig or human being, is a ditto copy of the organism from whom the original cell nucleus was taken.
Nature has been cloning organisms since the creation of the Earth. For example, when the stems of a strawberry plant branch out, a new plant grows where the stem takes root. That new plant is a clone of the original plant. Similar cloning occurs in grass and potatoes. People have been cloning plants in one way or another for thousands of years. For example, when you take a leaf cutting from a plant and then grow it into a new plant (vegetative propagation), you are actually cloning the original plant.

Plants are not the only organisms that get cloned naturally. The unfertilised eggs of some animals (small invertebrates, worms, some species of fish, lizards and frogs) develop into adults under certain environmental conditions. This process is called parthenogenesis, and the offsprings are clones of the females that laid the eggs. But most of these asexual species tend to die, as sexual reproduction is the only way to improve the genetic stock of a species. Another example of natural cloning is identical twins. Although they are genetically different from their parents, identical twins are naturally occurring clones of each other.

In the 1970s, a scientist named John Gurdon successfully cloned tadpoles. He transplanted the nucleus from a specialised cell of frog a into an unfertilised egg of frog b, in which the nucleus had been destroyed by ultraviolet light. The egg with the transplanted nucleus developed into a tadpole that was genetically identical to frog a. While Gurdon's tadpoles did not survive to grow into adult frogs, his technique of nuclear transfer paved the way for later successful cases of cloning. The most path-breaking one being Dolly.
However, most cloning attempts in mammals fail (see table: A few get to be born). Besides this, cloning leads to serious birth defects. Ethical and moral questions apart, very little is known about human genetics. Genetic engineering (the technology behind cloning) heavily relies on the 'hit and miss' principle. As a result, most clones tend to suffer from some or the other deformity. As many as 30 per cent are affected by the 'large offspring syndrome', due to which they suffer from obesity. Scientists are still struggling to find the reasons behind these defects.

Due to such uncertainty, many researchers believe it's likely that attempts to create a human clone would result in miscarriages or high risk of deformity among the clones.

"It is not an inevitable consequence of being cloned but it is a common one," says Harry Griffin, head of Roslin Institute.

Moreover, some feel that human cloning will become a dangerous tool in the hands of a dictator. Remember how under Adolf Hitler, German scientists took part in an ignominious attempt to create an Aryan blue-eyed and blond-haired 'master race'. The Nazis also adopted the 'science of eugenics', which proclaimed that some were fit to live and breed while others, such as the mentally or physically handicapped, were considered genetically inferior and had to be destroyed or sterilised.

Experts say that having a clone does not mean there will be two persons exactly the same. Environment plays a huge role in shaping the thought and behaviour of people. A cloned person's personality would differ as a result. We are much more than just our genes.

In the wake of these controversies, there has been a growing demand for a worldwide ban on human cloning. Many countries have already barred the process. Prominent among them are Australia, Austria, Argentina, Belgium, Brazil, Denmark, France, Germany, India, Israel, Italy, Japan, Mexico, the Netherlands, Norway, Portugal, Romania, Russia, Spain, South Africa, Sweden, Switzerland, and the uk. In the us, the senate has passed a bill banning human cloning, but it is yet to go through the Congress and get the final nod from president Bush.

However, in January 2001, the uk government passed rules to allow therapeutic cloning. Supporters of cloning say that this is a step in the right direction. Therapeutic cloning is the process by which a person's dna is used to grow an embryonic clone. However, instead of inserting this embryo into a surrogate mother, its cells are used to grow stem cells. These stem cells can be used as a human repair kit. They can grow organs, such as hearts, livers and skin.

Other supporters of cloning see it as a way to aid couples with infertility problems, who want a child with at least one of the parent's biological attributes. But here again, critics of cloning repeat the question often associated with controversial science: "Just because we can, does it mean we should?"

Another problem related to cloning is that of inadequate regulations. This is important, especially as we have come closer to cloning a human. Experts say that these regulations should be immediately put in place after thoroughly discussing all the pros and cons in a scientific manner. Cloning might accomplish many good things, but it might do just as much harm, for all that we know.
Genetic Cloning Genetic Engineering Science Technology Development Development PLANT GENE RESOURCES Animal Genetic Resources Animal Genetic Resources Statistics Statistics Genetic disorder Classroom Web edition Web edition News News News Pharma Medecins Sans Frontieres Hepatitis C Down to earth D aclatasvir Bristol-Myers Squibb
SUPPORT US