A farce on forests

The key interests of both proponents and opponents of the forest convention is control of the timber market. The convention is driven by commercial interests

A farce on forests 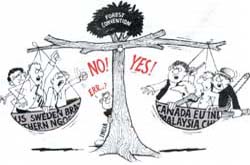 BY THE time many world leaders come to meet in the United Nations (UN) at the special session on environment, key decisions would have been taken by the leaders of the Group of Seven most powerful nations (G-7) at their meeting in Denver, Colorado. This year, key environmental items are on the agenda of these leaders. In particular, leaders will decide the fate of the forest convention - a legal instrument to manage the world's forests (Down To Earth, Vol 6. No 1).

The other items are: timetable for reducing green house gas emissions and institutional restructuring of the UN for environmental issues. The UN General Assembly Special Session to Review the Implementation of Agenda 21 (UNGASS), which follows Denver is also scheduled to be a high profile event. US president Bill Clinton is expected to attend, so is German Chancellor Helmut Kohl and a host of other world leaders.
It is expected that Kohl on behalf of his European colleagues is going to demand firm green commitments from Clinton. The US president, who also wants a good scorecard on environment, is evidently holding a few aces up his sleeve. In this leadership battle, Kohl, say German environmentalists, is keen on pushing for the forest convention. "It is Kohl's pet item," they say. On the other hand, the US is opposing the convention. it also does not want a tough timetable on greenhouse gas emissions. Commentators, say the deal will be made some where between the world's forests and the world's climate. The most likely scenario is an agreement on the forest convention - with the Europeans giving in to the US for a soft timetable on green- house gas emmissions. Another scenario is that a new environmental issue could emerge on which there is consensus. A global initiative on water is being discussed vaguely. Another rumour doing the rounds, particularly in Germany, is the proposal for a World Environment Organisation (WEO), which would pro- vide the institutional framework for green negotiations on the lines of the World Trade Organisation (WTO). Former environment minister of Germany, Klaus Topfer, is keen on the job of heading the organisation says the green grapevine.

The battlelines over the forest convention are firmly drawn. The US has changed it's stance from being a proponent at the time of the Rio summit, to being it's chief opponent. Canada, Finland, Germany and The Netherlands continue to be the frontline generals, with Malaysia, Indonesia and China providing the Southern flanks. India is sitting on the fence and has been forgot ten by all. While Brazil - with huge Amazon interests - is the lone opponent from the South. The us position has blocked the convention till date. No agreement of any kind could be reached on the subject at the commission for sustainable development (CSD). Because of this discord a menu of options has been put to the UN General Assembly Special Session to review implementation of Agenda-21 (UNGASS). The options include propositions to set up an intergovernmental negotiating committee (INC) immediately. Or to delay the process. As yet, these are all bracketed (UN jargon for propositions not yet agreed upon) since there was no agreement in the CSD. While the forest convention has been the bugbear of many meetings, little is known of the shape and form of this creature. What is known, increasingly is that the key interests of both the opponents and proponents of the convention is the control of the global timber market. The convention is therefore, driven by commercial interests. The lip service to conservation is to get the same timber industry certified as "green". Therefore, it is vital for these timber , producers to develop a set of criteria and indicators - known as C&I - to define how "green" their wood is. The convention would be used to legitimise this green trade by setting global rules and penalties for sustainable forest management.

Canada and Finland, who are the most vocal advocates of the convention, are both timber producing countries who see the convention as facilitating an expansion of their own timber markets. The Finns have a trade problem with the Canadians. They therefore, see the convention as a medium of setting global standards and dealing with their arch rival in the wood trade. At a recent meeting at the WTO in Geneva, the representatives of the Finland government privately confided that they need to "globalise" the concern over forests to get the Canadians on the multilateral negotiating table which would be acceptable under WTO rules. The Canadian Pulp and Paper Association (CPPA) spokesperson, said at the same meeting, that the ecolabelling schemes which had been established by the Europeans were designed to keep wood from other forests out of the European market.


The us came out with its opposition to the convention only in 1995. It is difficult to gauge the reasons for its changed position, but it is clear that its timber industry - already under pressure from the spotted owl and the environmentalists - fears global sanctions. The US timber industry is not so well organised with its criteria and indicators for "sustainable" production.

The North has always controlled the world timber market. With vast forest areas, proximity to markets and ready supply of capital which is needed in this expensive business to turn trees into paper, the temperate timber industry has flourished - with a global annual turnover of over us $330 billion in 1995. US companies, International Paper and Georgia Pacific and Kimberly-Clark are the top three companies in the tree business. In 1995, their combined revenue was over us,50 billion annually. It is also projected that the demand for wood products is increasing and will need up to us $200 billion of new capital investment.

In the North, environmentalism is taking a toll of this lucrative industry. A private consultancy in the US has estimated that in 1990-1995, the forestry industry lost as much as a tenth of the world's productive forest land to non- industrial uses such as conservation and recreation. On the other hand, the Southern companies are making inroads with an advantage of their own; a climate in which trees grow faster. Therefore, Northern companies want a "level playing field" so that there are environmental controls on forestry of the tropical world. The true competitive advantage of the South lies not in its natural forests but in plantation forestry. For instance, forests of Brazil outstrip, in terms of productivity, the forests of the us. Brazilian forests have an annual growth of 40 cubic metres per hectare. In comparison, US forests yield only 10-20 cubic metres per hectare. Malaysia, with its vast forest potential is keen to seize this opportunity. At Rio, it was under tremendous pressure from environmentalists for resisting the convention. Malaysian timber was being boycotted. The country was seen as an environmental criminal.

But by 1997, the Malaysian government had completely wooed over it's detractors. It worked extensively with the Canadians to develop a set of criteria and indicators for 'green' wood. The Malaysians are supremely confident that these indicators will help them to Missing in this concern for forests is the human being. The communities for whom forests are habitats and not timber reserves sell 'environmentally correct' wood. The domestic pressure on Malaysian companies is greatly reduced as they are fast expanding their base into neighbouring tropical countries. This global expansion game which Malaysia is learning from the North will help it to diffuse environmental pressure at home.

In Germany, the Ministry of Environment has rejected the idea of a forest convention. Even the government's high level advisory committee on global environmental issues has not supported the convention. The support instead has come from the utilisers of the forests, the Ministry of Agriculture who, even officials in the foreign affairs admit, are not the agency best suited for the protection of forests. The Dutch continue to have a curiously naive position. They remain fervent in their belief that the convention is needed for the conservation of forests across the world.

The global NGO positions are also dictated by this fact. NGO giant, Greenpeace, which had argued for a convention in the Rio days, has changed its position radically. It opposes the convention saying it is "political tokenism" and is pushing for a forest protocol under the biodiversity convention as it sees conservation as its primary objective.

What remains completely missing in this concern for forests is the human being. The vast numbers of communities for whom the forests are habitats and not timber reserves, biodiversity genepools or carbon sinks. But are their subsistence base from which they get fuel to cook, fodder of their livestock, wood to build, thatch to roof, herbs for medicines, resources to sell for their livelihood. The global rules which are being developed for "sustainable management" do not even begin to comprehend the extraordinary diversity of users of forests across the world and the rights of their poor users.