Industry, government blame each other for green sector’s fall 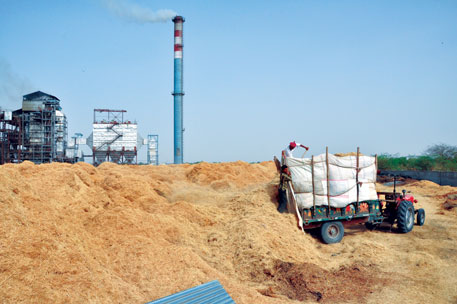 Biomass power sector is in trouble. About 60 per cent of the country’s grid-connected power plants that run on biomass are either closed or about to be closed. Reason: rising fuel price, unrevised tariff and government apathy.

Of the 39 biomass power plants in Andhra Pradesh, the state with the highest number, 17 are functional. In Chhattisgarh, of the 29 plants only four are working, says the industry (see:Ã”Ã‡Ãª‘Status of biomass plants’). State governments refused to comment on the status of shut plants. Chhattisgarh has the highest installed capacity of 249.90 MW. In Rajasthan, two of the 10 plants have been shut over the past two years and many are on the verge of closure. 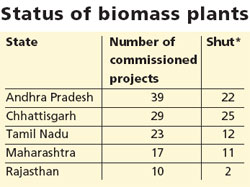 The uncertainty is giving sleepless nights to Amitabh Tandon, managing director of Transtech Green Power Ltd in Jaipur. In 2010, he invested Rs 100 crore to set up a 12 MW biomass power plant in Kasla village in Sanchor town of Rajasthan’s Jalore district. For the past 18 months, the plant has been generating only 10 MW, incurring a loss of Rs 30 crore. The plant was initially fuelled by vilayati keekar (Prosopis juliflora), a thorny invasive tree which grows wild. But due to growing demand in the market, the cost of the wood increased from Rs 1,500 per tonne in 2010 to the current Rs 2,500 per tonne. Consequently, Tandon shifted to using cumin husk, which costs Rs 2,200 per tonne. “Even this is expensive for my plant which needs 300 tonnes of biomass every day. Besides, cumin husk is available only between April and October,” he says. Biomass power plants in Rajasthan mostly use vilayati keekar and mustard husk (see: ‘Cost of biomass’).

Some 150 km away in Sirohi district, a 20 MW plant closed in 2010. The owner could not afford soaring losses. “Government should take immediate action to tackle the situation,” says Tandon.

Finding themselves in a precarious situation, Indian Biomass Power Association (IBPA), a private body of biomass power developers in Mumbai, sought the help of the ministries of new and renewable energy (MNRE) and power, but in vain. “We are very close to a total shutdown,” says D Radhakrishna, IBPA general secretary.

The primary reason behind the downfall of the sector is the competition from other industries which have started replacing their fuel, like furnace oil and coal, with biomass, says Sunil Dhingra, a senior fellow at Delhi NGO The Energy and Resources Institute. A survey of biomass price and supply, commissioned by the Rajasthan Renewable Energy Corporation Ltd (RRECL), shows that brick kilns are the state’s biggest biomass competitors. During 2010-11, kiln owners were purchasing biomass at Rs 2,000-Rs 2,500 per tonne, which was cheaper than coal which cost Rs 3,511-Rs 3,865 per tonne, according to the survey. The average calorific value of coal used in brick kilns is 3,790 kcal/kg, while that of biomass is 3,300 kcal/kg. 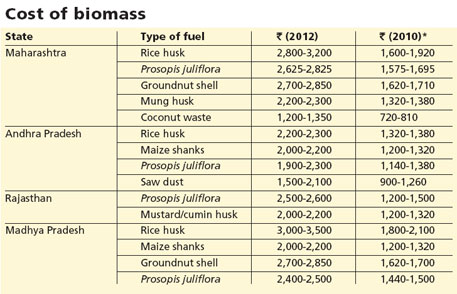 Radhakrishna says another reason is the middleman who has captured the unregulated biomass market. “He is selling biomass to anyone who pays a good price,” adds Radhakrishna. For instance, Tikam Singh of Jalore is currently procuring cumin biomass at Rs 2,200 per tonne. He gives Rs 880 to the farmer, Rs 220 to labour, Rs 770 for transportation and keeps Rs 330 for himself. “In the past two years, the prices have almost doubled at every step, especially at the farmer and transporter’s end,” says Singh. Vilayati keekar sells for more because it involves the cost of chipping, handling and cutting, he adds. Since vilayati keekar is a poor man’s fuel, there could be chances of biomass plants eating into the kitchen’s share. “We leave some portion of our land for vilayati keekar,” says a farmer from Kasla. About 60 tonnes of vilayati keekar can grow in a hectare. “We need 100 kg every month. The rest is sold to anyone who gives a good price,” adds the farmer.

It is difficult for plant developers to pay the high cost as their cost of generation would rise and electricity boards buy electricity at lower tariffs. For example, the biomass tariff in Rajasthan is Rs 5.40 per unit. “But it costs me Rs 6.10 to generate one unit,” says Tandon. Anil Patni, project director of RRECL, says the tariff is enough for plants to function. “They are shut because of their management problems,” he adds. Fuel cost makes for 60 per cent of the tariff price but most states have either not revised tariffs or the revision is not in accordance with the rise in biomass price, says M Komaraiah, chairperson of the Andhra Pradesh-based Shalivahana Green Energy group which is installing plants with total capacity of 35 MW in Madhya Pradesh. The state recently increased its tariff to Rs 4.77 per unit. “Given the current biomass cost, it should be at least Rs 5.50 per unit to make business viable,” he says (see ‘Biomass tariff (2012)’). In March, the Central Electricity Regulatory Commission (CERC) conducted a public hearing to revise tariff for biomass. It recommended biomass tariffs for various states. But due to political interests, many states did not accept the recommendation. IBPA says CERC did not take the right factors into consideration while calculating tariff. For instance, CERC has taken capital cost of a plant as Rs 4.50 crore per MW. But this value would not even cover the cost of engineering, procuring and construction. “The capital cost comes to about Rs 5.70 per MW,” says IBPA. 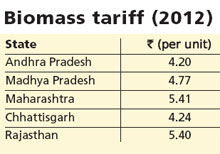 A CERC official, who did not want to be named, however, says, “Our factors are correct. For industry, any tariff would be less.” In March, CERC constituted a committee to review the issues in the biomass power sector. The committee is yet to meet since many of the selected people have not yet confirmed their membership, says the CERC official. “The problem is that the moment government revises tariff, biomass cost rises,” says Mamta Dalmiya, director of Parijat NextGen Energy Pvt Ltd in Bengaluru.

Another concern of the industry is delayed payments by state discoms. “In Rajasthan, a delay of two months is usual. This puts more pressure on us as we need an operating capital every day,” says a developer who wished to remain anonymous. “It is because the discom is in debt of about Rs 30,000 crore. Moreover, it is the state’s mandate to keep the tariff low,” says C S Chandalia, director, power trading at Jaipur Vidyut Vyapar Nigam Ltd.

Dhingra says the problem lies in the very policy of biomass power generation. “Knowing that the biomass fuel market is unregulated, the government should have been cautious before allowing it for power generation,” he says. The government, moreover, quotes higher power potential of the available biomass without considering that many industries use biomass. As per MNRE, the availability of biomass every year is between 500-750 million tonnes, which is enough to produce 18,000 MW.

Getting loan is another problem power developers face. “Given the current state of the sector, most of the banks are shying away from financing, or are providing loans at interest rates as high as 17 per cent,” says Radhakrishna.

An official of Rural Electrification Corporation Ltd, a government of India undertaking, says, “We finance projects only if the developer can demonstrate that his project would be successful, which is difficult given the mess the sector is in.” 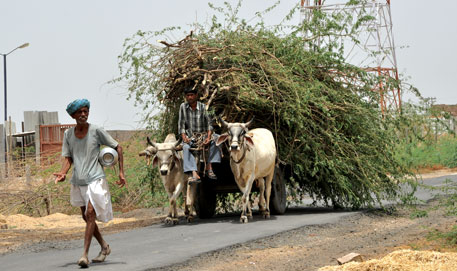 Some project developers say their business could have been profitable if they were allowed to sell renewable energy certificates (REC) in the carbon market. REC promotes sale of electricity from renewable sources to discoms at the prevailing conventional energy tariff. While the conventional tariff is less than preferential tariff, the remaining balance is recovered by selling the environmental attribute of generating this clean electricity in the form of REC. One REC equals 1,000 units (MWH) which has a floor price of Rs 1,500 per MWH. But since power developers have signed power purchase agreements (PPAs) with state discoms, they cannot do so. “We are bound by our PPAs which have a lifespan of 13 to 20 years,” says Komaraiah. The purchase of RECs helps a state fulfil its Renewable Purchase Obligation (RPO), a target set by states for discoms to purchase a certain amount of electricity from renewable power producers.

The government puts the blame on developers. They have set up high capacity biomass plants and, therefore, arranging fuel is a big problem, says N P Singh, director, biomass power at MNRE. “We had forseen this problem a decade ago and told many states to not allow big plants, but they still went ahead,” he adds. Small-scale off-grid plants are better because biomass can be easily arranged, says D K Khare, director of biomass gasification, MNRE. Such plants supply electricity directly to the village they are set up in unlike the grid-connected ones which feed power into the main grid. “The right way to enter this sector is through strategic long-term sourcing of biomass, which is difficult given the competition, or unless plants are below 1 MW,” says Manish Ram, renewable energy analyst with Greenpeace India. An official of Non-conventional Energy Development Corporation of Andhra Pradesh says the developers should have done a micro study to ensure uninterrupted supply of fuel before setting up plants. “Considering the situation, we are not permitting any more projects,” he adds.

But developers say it was the government which encouraged bigger capacity plants. “Developers were forced to set up bigger plants to match the per MW price of Rs 4.50 crore. This helped in achieving economies of scale. Bigger plants made us our own competitors in the fuel catchment area,” says Dalmiya. If developers would have built plants less than 8 MW their cost would have increased by 10-15 per cent, she adds. A fuel catchment area is an area from where the developer sources fuel. Radhakrishna offers a solution. To reduce fuel competition, he says, the states should reserve some fuel catchment area exclusively for a biomass plant and not permit any other plant.

To ensure adequate availability of biomass, the government says, developers should look towards biomass plantation. But none of the developers Down To Earth spoke to was interested in doing so. “Acquiring land is expensive and the government does not facilitate that,” says Komaraiah. The CERC official says just like in the case of solar energy sector, states should adopt competitive bidding process for deciding tariff. In competitive bidding whoever bids lowest tariff, wins the bid.

In Chhattisgarh, mostly cement industries are consuming biomass. “Now we are permitting only captive plants now,” says A N Singh, executive engineer at Chhattisgarh Renewable Energy Development Agency. Madhya Pradesh is, meanwhile, welcoming investors to set up biomass plants. “We have plenty of biomass,” says Ajay Vishnoi, the state minister for new and renewable energy. But does the state has any mechanism to shield investors from soaring fuel prices? “We cannot control the market,” says Vishnoi. The state has invited applications to set up biomass plants of 350 MW.

With no proper answers on how to revive the shut plants or those on the brink, the future of the green sector looks bleak.