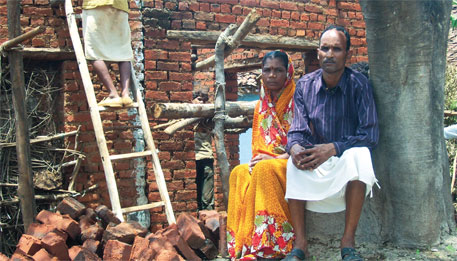 For years Amgaon village of Dindori district in Madhya Pradesh suffered from the same malady as most other villages in the country —despite an abundance of government funds and schemes, the residents were deprived of basic facilities like healthcare, sanitation, education, nutrition and means of earning. The reason: corrupt and insensitive officials and ineffective people’s representatives. Then, in 2003, they nominated Amrit Singh as their gramdoot—a volunteer who works for the village. He mobilised the people to make forest officials account for Rs 25,000 in misappropriated funds, get four tanks, four orchards, and three roads sanctioned under NREGA and change the president of the Joint Forest Management Committee in the teeth of fierce opposition from forest officials.

Around 1,000 villages in three states in the country have now embraced the concept of gramdoot conceived by the National Institute of Women Child and Youth Development (NIWCYD), a Nagpur-based non-profit. Started in 2003 with just 450 volunteers in four tribal districts of Madhya Pradesh, the gramdoot network has now expanded to a 10,000-strong force, spread across as many villages in the tribal and rural parts of Maharashtra, Madhya Pradesh and Chhattisgarh.

People’s participation is the only way to ensure proper implementation of government schemes. But ensuring a consistent and effective participation was not easy. Gramdoots have now mobilised communities, initiated dialogue with government agencies over rights and livelihood issues, improved the midday meal scheme and services at public health centres, ensured fair identification of beneficiaries under Below Poverty Line schemes and Indira Awaas Yojana and regularised work and payments under National Rural Employment Guarantee Act (NREGA). They have also encouraged the people, particularly women, to participate in village and panchayat-level decision-making processes.

The concept of gramdoot evolved out of a familiar dilemma of non-profits. Functioning within funding and tenure constraints, they rarely are able to leave behind a community empowered enough to take up its own causes. “Communities need deeper involvement and commitment than a paid field worker a non-profit can provide,” says Anil Nimbhorkar of NIWCYD. “Such a worker can only come from within the community,” he adds.

After much debate it was decided that the gramdoot should work voluntarily. “We realised that remuneration from a non-profit would not only limit the extension of the programme, but also trap the gramdoot within the ideological framework of the organisation,” says Nimbhorkar. “What was needed was a self-motivated worker.” Rajesh Malvia, who heads NIWCYD, says the absence of remuneration ensures that only truly dedicated people come forward.

The gramdoot is selected by the community through a consensus before the formal gram sabha meeting. Selection is broadly based on the candidate’s prior involvement in voluntary community work, willingness to devote time, independent means of livelihood and basic literacy. Gramdoots come from all age-groups, early 20s to late 50s. Majority of them are small land-holders. They are provided an initial training by non-profits and later the gram sabha monitors their work and reserves the right to remove them if work is unsatisfactory. The number of removals, however, has been low—just 25 in 10 years.

Gramdoots have tackled various problems in villages. In 2009, after Amrit Singh of Amgaon led an agitation at the collectorate, the village got work for 100 days under NREGA. “Earlier we were getting no more than 30-40 days of work,” he says.

Nemvati Banwasi of Bhakha Mal village of Dindori district in Madhya Pradesh, got Rs 4.6 lakh worth of tree-plantation work sanctioned under NREGA. What’s more, she insisted on receipts for all job applications. “We now fill the muster roll on our own, without depending on supervisors,” she says. Banwasi was the first to campaign for allowing affidavits in the absence of death certificates for claiming widow pension, a practice the block administration has accepted to the relief of many beneficiaries.

In Ghodadongri village of Baitul district in Madhya Pradesh, Pushpa Gohe mobilised women to stop illegal sand mining in the Machna river and capture trucks carrying sand. The mining has stopped now. “The village now has complete control over its natural resources. Women are aware of their rights and the village has been rid of moneylenders,” she says.

Almost all gramdoots have taken up cudgels against delayed payments under various schemes, especially NREGA. Gramdoot Ganesh Pursam of Parsel village staged a successful five day hunger strike at the tehsil headquarters in 2009 over Rs 20 lakh of payments held up since several years. According to a report by NIWCYD, about 50,000 families in the tribal districts of Dindori, Mandla, Baitul and Chhindwada districts have benefited under NREGA due to the intervention of gramdoots. The volunteers have helped the people in these districts get employment for 60 days annually.

Gramdoots believe that to keep the villagers informed is their most important duty. “Information can bring far-reaching change,” says Jiyalal Pendram of Thandpatra village in Dindori. “I found out that girl students were entitled to a scholarship of Rs 30 per month, which the school teacher had not paid for two years. The villagers got the due amount remitted, found out about entitlement to free textbooks, and got a new teacher after confronting the block education office and the teacher.

In Mawai block of Mandla district in Madhya Pradesh, some 16 villages recently applied for community forest rights (CFR) after gramdoot Prem Singh Pandhre provided the relevant information. “After my village’s CFR application was rejected, I got all the relevant information from the collectorate and disseminated it to all gramdoots in the block. Now many more villages are preparing to apply,” he says.

Despite the programme’s success, gramdoots admit their job is not easy. “It is stressful to work on same issues repeatedly,” says Amrit Paraste. Sometimes the volunteers get pitted against the rich and powerful within their village. Gramdoot Narayan Singh Thakur and assistant gramdoot Amarbati Dhurve, of Devri village in Dindori found themselves stepping on the toes of powerful people while drawing up lists of beneficiaries for Indira Awas and BPL schemes. Dhurve, who was also elected sarpanch, fought for six months and spent Rs 80,000 to clear her name in a corruption charge levelled by the high-caste deputy sarpanch.

To keep the volunteers from buckling under such pressure, a support system of tehsil- and district-level gramdoot associations has been devised by the volunteers and NIWCYD jointly. “Issues are similar everywhere. Addressing them collectively saves time,” says Malviya.

The gramdoot requires no external support from any government or non-governmental agency apart from one-time basic training. The endeavour has survived for the past 10 years and is not likely to fizzle out. “Every community naturally has some volunteering individuals,” says Malvia. “We just need to provide training and moral support.”
Features Sustainable Development Rural Development Public Participation National Rural … Maharashtra Madhya Pradesh India Governance And … Governance And … Down to earth Dindori (D) Corruption Chhattisgarh
SUPPORT US