Ayurveda practitioners in Kerala are experimenting with a novel approach to tackling AIDS: herbal medicines that increase the patient's immunity towards the virus 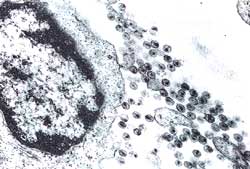 SOME AYURVEDIC hospitals in Kerala report their research into a novel method of tackling AIDS is showing promising early results, but they caution against raising hopes because their studies are far from conclusion.

Unlike the generously funded research being undertaken at some of the world's most prestigious labs on eliminating the human immuno-deficiency virus (HIV) to overcome AIDS, the Ayurvedic approach in Kerala is to let the HIV virus remain in the patient's body, but increase the patient's tolerance to it.

In Thrissur, for example, Ayurvedic doctors at the Amala Cancer Research Hospital say they are optimistic about the AIDS research they are carrying out. Though Amala is primarily concerned with cancer treatment, its Ayurvedic practitioners took on AIDS-related work when some patients were diagnosed as HIV-positive.

"Our medicines give resistance to the body and increase its immunity," says M Kesavan, chief physician at Amala. "As such we are not trying to kill the virus. Instead, we are trying to make the body fit enough to accept it".

Kesavan supervises a team of four Ayurvedic doctors who are together treating seven HIV victims. An eighth patient dropped out of the experiment when his condition deteriorated, but the response of the remaining patients keeps the Amala doctors hopeful. Says Kesavan, "All of my HIV-infected patients suffered from intermittent fever, enlargement of lymph nodes, lack of appetite and the swelling of joints -- typical symptoms of those suffering from AIDS. We have seen improvements in each of these symptoms since we started the treatment." The Amala doctors are buoyed most of all by the weight gain registered by the patients for they see this as a sign that the immunity can indeed be built into AIDS victims.
Treatment of AIDS along similar lines is also being explored by other Ayurvedic clinics in Kerala, which has an extensive network of 106 Ayurvedic hospitals and 527 dispensaries treating an estimated 6 lakh patients annually.

K Madhavan, who practices Ayurveda at the Sreevaidya Clinic in Kochi and is treating three HIV-affected persons, estimates AIDS research is being carried on at more than a score of them.

Madhavan explains that Ayurveda's basic premise -- that all illness in the human body results from an imbalance between the "basic constituents" of the life processes -- "may be employed fruitfully as a treatment path for AIDS". According to Ayurvedic precepts, the basic constituents are vada (air), pitha (bile) and kabha (phlegm). Asserts Madhavan, "When there is perfect balance between these elements, the body has the capacity to be immune to any virus."

Amala Centre's Kesavan concurs and adds, "With the realisation that all infections happen due to weakening of the human body's immune capacity, Ayurveda aims at strengthening this capacity in its entire range of treatment." Describing the treatment being followed by his team, Kesavan says, "Ayurveda recommends the use of seven plants in order to strengthen the body's defence mechanism against a variety of diseases." These are classified as immuno-simulants and include ashwagandha (Withania somnifera), tippali (Piper longum), satawar (Asparagus racemosus), kohka (Semecarpus anacardium), chitrak (Plumbago zeylanica) and patal kunda (Pueraria tuberosa).

The Amala team has prepared a range of medicines, using these plants in a variety of combinations. Some use ghee (fat obtained from milk) as a base, while others are powders. "The formulation using ghee," says Kesavan, "is usually used to strengthen the immunity system of tuberculosis patients. It is significant that tuberculosis is the most common pathogenic infection in the AIDS cases reported in India."
The Amala team, meanwhile, is confident that their research efforts will draw international attention shortly. Kesavan notes that the Ayurvedic approach of enhancing the body's immune capacity in order to treat AIDS has been cited in a recent World Health Organisation document, which goes on to urge medical researchers to "look towards immuno-modulatory therapies as expeditiously as possible, especially in developing countries where there are a growing number of infected individuals".

However, Ayurvedic researchers in Kerala tackling AIDS say they are handicapped by a lack of institutional and infrastructural facilities, which is affecting the testing needed to validate their case.

The major handicap, they say, is meagre financial support. The Kerala government's 1992-93 allocation for the operation and maintenance of its Ayurvedic institutions was Rs 25 lakh, of which less than 5 per cent was earmarked for research. And, Ayurvedic doctors practising privately say their earnings are not enough to finance long-term research or treatment. "The moment we charge patients the whole cost of AIDS treatment, we put the cure beyond the reach of their pocket," says a private practitioner. "Remember we are a long way from guaranteeing success."

Even those directing well-established institutions like Amala stress government financial support is essential for large-scale AIDS research. Presently, says Kesavan, Amala absorbs half the cost of treatment of its HIV-afflicted patients, to the tune of about Rs 450 per month. But Amala can do so, he adds, "only as long as the number of patients we are looking after is quite low". This precludes the expansion of treatment to numbers sufficiently large to make their experiments valid. And so, Amala doctors say they will be content with the opportunity to conduct a "systematic study of 20 patients for two years".

Another major problem confronting Ayurveda doctors engaged in AIDS work is the lack of access to scientific facilities to test their findings. Amala doctors say they are fortunate because they have the equipment to administer the so-called ELISA test to screen blood samples for the HIV virus.

Ayurvedic doctors also complain they are cold-shouldered by their counterparts in allopathy both at private as well as state-run institutions, especially when it involves clinical evaluation of the effects of Ayurvedic formulations. Salim Kumar of Shrees Pharmaceuticals in Moovattupuzha, who also heads a group of Ayurvedic researchers says this is why the Council for Scientific and Industrial Research has had to send Ayurveda formulations to Nigeria to test their validity. "Do you really imagine that we lack the proper facilities?" he asks.

Kumar maintains the need for testing in Nigeria arose because of the suspicion and contempt that allopathic practitioners have towards Ayurveda. In any case, he adds, the Nigerian tests positively evaluated the Ayurvedic formulations' capacity to improve the body's immuno-potentiation activity.

Kumar has made an official request to the Kerala health ministry to allow his group to open a cell at one of the government's medical colleges. "This would allow us," he explains, "to establish a sample group of patients whom we could treat and observe for specified durations, while the authorities simultaneously test our claims."

But the Ayurvedic doctors refuse to get dispirited and Amala director R Kuttan describes what he considers official apathy as an indicator that "Ayurvedic experts have to lobby and demonstrate their claims more successfully". At the minimum, he points out, Ayurveda can offer the world a promising strategy to fight the AIDS menace. Says Kuttan, "International research shows that of all the HIV-affected cases, 50 per cent remain carriers, 25 per cent die of full-blown AIDS and the rest, of AIDS-related diseases." Kuttan maintains Ayurvedic treatment can reduce the number of fatalities by increasing the proportion of carriers.

WHO experts estimate that by the first decade of the next century, AIDS will be a major disease in India, exceeding in spread such illnesses as tuberculosis and malaria. Though the present monitoring and testing network is utterly inadequate, it still reports there are 10,730 HIV-positive cases out of a random sample of 14.9 lakh Indians. Of these, about 800 (or 8 per cent) are considered to be terminal.

Confronted by such statistics, Kesavan argues, "Even if our theories are proved invalid, can we really afford to ignore exploring their full potential?"