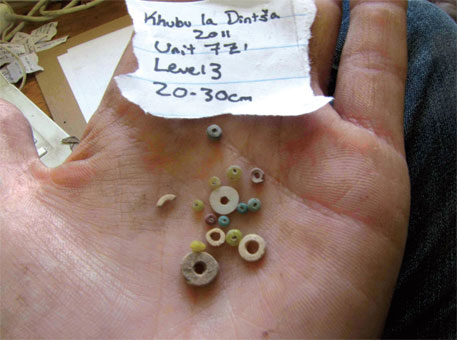 In 2009, Carla Klehm, an archaeology student researching pre-European African cities and kingdoms, was excavating at Khubu la Dintsa at the eastern edge of the Kalahari desert in Botswana. Littered with broken-down entranceways of mud and stone, the site was an unlikely dig for an archaeologist researching urban sites. There was little evidence of traders visiting Khubu la Dintsa, though historians did have knowledge of urban centres a few hundred kilometres away. So Khlem was somewhat perplexed when the dig revealed more than 200 tiny glass beads.

“I had to struggle to control my breathing, terrified of blowing them out of my hand into the Kalahari desert,” writes Klehm, now a post-doctoral lecturer at the Department of Anthropology at Washington University in St Louis in the US. He later found out that the tiny baubles probably came from a country in West Asia.

The beads are clinching evidence of the ways in which the Indian Ocean network linked diverse societies in West Asia, the Indian subcontinent and Southeast Asia and Africa (see ‘A connected world’). “It sounds surprisingly modern,” says J D Hill, an archaeologist at the British Museum in London. “The world was interconnected long ago.”

Dating to 1220-1420 AD, the Khubu la Dintsa site is 14 km from Bosutswe. Between 700 AD and 1750 AD, Bosutswe was a major regional hub for Indian Ocean trade. It functioned both as a conduit to the Congolese basin and as a provider of cattle—a crucial component for the long journeys undertaken by traders. Writes Klehm, “Bosutswe’s importance in regional trade would have meant more cattle for its elite. The livestock would have needed grass. The neo-rich depended on Khubu la Dintsa for grazing sites. The outlying community here would have been incorporated through social and political alliances and ties, possible through marriages. Khubu la Dintsa would have had an opportunity to get rich on glass beads.”

Link to the Indian Ocean

In a small laboratory associated with the Field Museum in Chicago, Laura Dussubieux carefully holds a tiny—almost the size of a pinpoint—bead so that a laser can drill a microscopic pit into its surface. Dussubieux’s work brings out the connection between beads found in Khubu la Dintsa—and many other parts of the world—with India and Southeast Asia. The drilling releases a puff of gas. A mass spectrometre than records the gas’ composition. “The result is a unique signature that can reveal how, where and even when the glass was formed,” Dussubieux told Science. 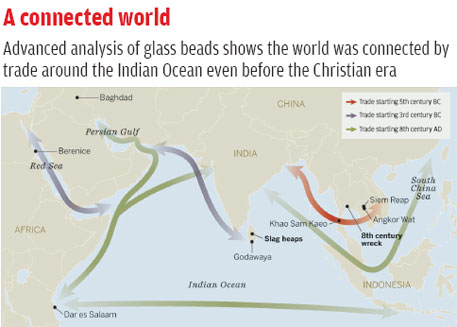 In the 1990s, archaeologist Bernard Gratuze of the French national research agency CNRS pioneered bead analysis using lasers and mass spectrometres. Dussubieux learned the techniques as Gratuze’s student. “Beads were often made locally of raw glass ingots that had been shipped great distances and new technique made it possible to trace the glass to its origin, revealing shipping and trade routes,” she says.

“The bead type reveals African ties to West Asia starting around 7th century AD, followed by trade with distant Sumatra and then with India around 1,000 AD. The glass from India is very different from the glass from Southeast Asia,” says Marilee Wood of the University of Witswatersand in Johannesburg. Wood uses bead analysis to track trade routes along the southern coast of East Africa.

Klehm’s research shows that the glass beads travelled as commodities around the Indian Ocean, passing through the hands of many traders and sailors from West Asia and South and Southeast Asia to eventually arrive in Botswana in Khubu la Dintsa. Ancient glass is made most often of silica sand, to which an alkali or alkali earth-based flux is added to keep the melting point low. “The glass beads in Sub-Saharan Africa are made from silica (from the sand), lime and soda (alkali). The type of soda can be broadly diagnostic of when and where the glass beads were made,” Klehm writes.

“What we see at Khubu la Dintsa are high-aluminium, low-lime glass beads typical of West Asia; they date to the 13th century AD. Elsewhere in the Kalahari, we find mineral soda beads, typical of South and Southeast Asia. These originated around the 10th century AD. By the early 15th century, beads again flowed in from South Asia,” Klehm adds.

Beads, in fact, had become a commodity in trade several centuries ago. Bead studies have shown that mineral soda formula originated in the 5th century BC in the Gangetic basin and then spread to the south and east. When Dussubieux analysed beads excavated at Khao Sam Kaeo, which emerged as a trading city in the Malay peninsula in 4th century BC, she found that they were made of soda-rich glass. “The raw glass was likely made in India and shipped more than 2,000 km east,” she writes.

In her study of Cambodian beads, Alison Carter, an archaeologist at the University of Wisconsin Madison, showed that beads dating to the 1st century AD from the southeast of the country were made using potash—an indigenous Cambodian method—whereas beads in the northwest consisted of mineral soda glass from India. “Eastern and Southern Africa are late entrants to the Indian Ocean trade story,” says Mark Horton, an archaeologist at the University of Bristol in the UK. But they took to this commerce with much gusto. Portuguese merchants who became involved in the 15th century AD note the high trade value placed on glass beads. According to Klehm, “Their African partners were specific about the point of origin. Only glass beads originating from the Indian Ocean were considered proper currency. European glass beads were considered unacceptable. Portuguese traders would travel all the way to ports in India to obtain beads for the African trade.”

These traders describe how glass beads played a large role in the exchange of African trade goods, especially gold. Several accounts talk about the port of Cambay (today Khambat in Gujarat) as one of the several centres of glass bead manufacturing. Glass beads signalled social standing in African groups involved in the trade. The most distinguished individual wore a string of Indian Ocean beads.

They continued to remain important in Eastern and Southern Africa, even after the Indian Ocean trade had diminished. David Livingstone, the 19th-century British adventurer missionary, noted that glass beads were currency in Botswana. Colonists used glass beads to bribe children to attend missionary schools.

In the Indian Ocean countries too, people separated by culture, polity and geography share a love for glass beads.