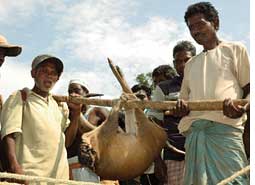 For the first time since Independence, the 28 tribal villages inside Jharkhand's Dalma wildlife sanctuary have electric bulbs lighting up their homes. The solar lamps are a gift from the forest department to thevillages that cooperated in taming the violent tribal hunting festival Sendra. The lamps are a small part of the gifts showered by the forest department on the villagers who participated in the "No Confrontation, Only Persuasion" drive to check the gory hunting festival that results in the large-scale massacre of dozens of animals including deer. Officials in the department have every reason to rejoice as they have succeeded in achieving what their predecessors failed to. All this, despite lack of political will to put a stop to this ancient festival, which has become an anachronism.

Sendra is a sacred hunting festival celebrated during spring, when around 20,000 tribals, many coming from neighbouring districts, climb up the Dalma hills with bows and arrows. Advasis of West Bengal too observe the hunting ritual in the Ayodhya hills of Purulia district. This year, however, Siddharth Tripathy, divisional forest officer (dfo), Ranchi, along withRashtriya Jharkhand Seva Sansthan, asocial work organization, and A T Mishra, dfo, Dhalbhum, was determined to soften the bloody face of the festival. For that they preferred persuasion to coercion. "Our strategy was to persuade the tribals to refrain from hunting. We never wanted to confront them. Batches of tribal social activists were sent to the villages in groups to mingle with the locals, followed by a sensitization drive through puppet shows," said Tripathy. 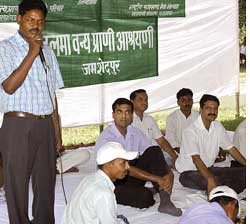 The roadblocks were many. Nearly half of a total of 257 informal meetings ended in a confrontation. Villagers became hostile and accused the department staff of promoting illegal felling of trees. Clearly, the tribals had to be won over. "That was easier said than done. We had to take tough measures. We replaced forest committee members against whom there were allegations withnew faces to show we meant business," Mishra said. Even then the team realized that they would need outside help. That was when Jharkhand Renewable Energy and Development Authority (jreda) and Indian Railways were roped in.

While jreda was contacted to distribute around 4,000 solar lamps to the 28 villages inside the sanctuary and 54 villages on the periphery of Dalma, the railway officials were requested to start a ticket-checking drive two to three stations before Jamshedpur or Adityapur. The plan worked as nearly 2,000 ticketless hunters were disembarked. "It was also clear that tribals fromthe periphery of Dalma will not cooperate with us because they had not been sensitized and there were no sops for them for making Sendra bloodless," said Mishra. "In addition to the gifts, the department ensured they got jobs under national rural employment guarantee scheme (nregs). Sendra is so deeply rooted in the tribal culture, even these sops would not have weaned the community from hunting.

Digambar Hansda, a tribal who prepared the syllabus on tribal affairs for union public service commission (upsc) mooted the idea of holding an archery competition on the big day of Sendra festival. This proved to be a big success as many tribal hunters participated in the archery competition that had whopping prize money of Rs 4 lakhs. The rest of the marchers to Dalma hills were won with chana-gur and other snacks. There were other long term measures. Bhado Kisku is among the 30 young persons who are going to receive paramedical training at Vrindavan Hospital in Ramgarh. And Surya Mahato in Kadam village is working with the department on a horticulture project.

For the forest department, the actual work has just begun--to deliver the promises made to the tribals in exchange of a more humane Sendra. But for now the department is happy. Happy that they have turned the gaze of the tribal hunters from wild boars to bull's eye.